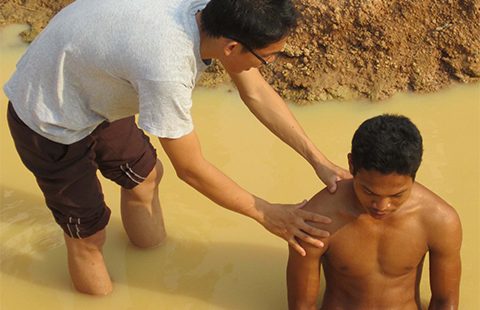 Cambodians are flocking to the faith, but the rapid growth of the religion has been largely overlooked.

In 2014 I spent several months interviewing Cambodians about their beliefs. Largely this meant talking about the mixture of Buddhism and animism that makes up traditional Cambodian religion. But I was struck by one thing that seems to be largely overlooked in the literature about Cambodia — the rapid growth of Christianity.

This is somewhat surprising, as Buddhism is a crucial element of Cambodian national identity. “To be Cambodian is to be Buddhist,” as a widely-quoted saying has it. The would-be convert’s first hurdle is to overcome the feeling that Christianity is in some sense a betrayal of Khmer-ness.

The second hurdle is that Christianity has a reputation for teaching disrespect for parents. This is a little difficult to fathom given the Biblical injunction to honour one’s mother and father. But respect for parents is one of the foundations of Khmer society and it comes as a surprise and a relief to young would-be converts to find that they are not expected to turn their backs on their families.

That these obstacles are increasingly being overcome is witnessed by the fact that Cambodia is the ninth-fastest growing Christian community per capita in the world. What is behind this?

A theme I heard over and over from recent converts was that Christian congregations – the churches as an institution, not the belief system of Christianity – offer fellowship and a sense of purpose. This is the first factor that draws converts, and my impression is that it is the most important.

Second is that evangelical churches are invariably far wealthier than their non-Christian audience. “I prayed for a motorbike and my parents bought me one but it was old and I prayed again and it was stolen and God knew my will and one of the Christians in the church bought me a new one,” said a young Christian interviewed by The Phnom Penh Post.

It would be a mistake to see this as confirmation that converts are “rice-bowl Christians” in it for what they can get. This expectation of the Christian God is indistinguishable from the way Cambodians approach the spirits, who are also regarded as the source of material blessings — the Christian God is assimilated to the Khmer universe as the most powerful inhabitant of the spirit world.

A look at the recent history of South Korea offers some suggestive parallels.

The foundations of Christianity were laid there in the first half of the 20th century, when missionaries established schools offering an education not otherwise available in an elite-dominated society. Still by 1960 only two per cent of the Korean population were Christians.

The great explosion came in the 1970s and 80s, the period of South Korea’s economic miracle, when the villages were emptied into the cities and modern values (equal opportunity, self-advancement) replaced traditional ideas of order and hierarchy. Materialism trumped spirituality. Half of all Koreans now say they have no religion at all; of the remainder, about 30 per cent have opted for Christianity, a religion identified, somewhat paradoxically, with both individual success and social justice.

Cambodia is unlikely to repeat the South Korean economic miracle, but the economy is growing rapidly and for the first time in their history ordinary Cambodians can hope for a future radically better than their past. And a small but growing minority see Christianity as the key to that future. It offers schools to the poor and scholarships to the gifted (Cambodians see education as the key to self-betterment), it teaches a message of social justice to the victims of an unjust society (the present kleptocracy is deeply resented by ordinary Cambodians), and it provides an organised and supportive community in a country in which civil society barely exists.

Christianity is becoming increasingly Cambodianised. Contrary to the stereotype, the leaders of today’s Christian communities are more likely to be Cambodians than foreigners, and more and more conversions are coming about through direct contact between Buddhist Khmers and lay Christian Cambodians rather than through traditional evangelism. (For an excellent overview of how foreign missionaries work in the kingdom, but one which misses this important shift to Cambodianised and community-centred proselytisation, see Sebastian Strangio’s “Proselytising amid the poverty”, published in The Phnom Penh Post.)

Relations between Christians and Buddhists are generally harmonious, but I have some fears for the future.

Converts tend to distance themselves from the non-Christian community, largely because they feel unable in good conscience to participate in events such as Cambodian New Year and the Pchum Ben festival; both are central to Khmer identity, but both involve participation in what Christians regard as “idolatry”. This trend will probably strengthen as the number of Christians grows and their communities will consequently have less and less need to interact with non-Christians.

Ninety-seven per cent of Cambodians are Buddhists, but Christianity is growing at almost six per cent each year and will overtake Islam as the second largest religion in less than a decade. Should present trends continue, it is not inconceivable that the country’s religious demography will be transformed by the middle of the century.

Philip Coggan is an Australian writer based in Cambodia, and author of “Spirit Worlds: Cambodia, the Buddha and the Naga”.