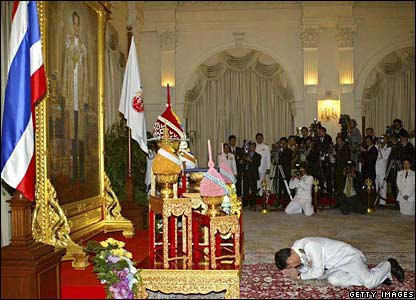 In 1873, the Royal Siamese Government Gazette published a palace announcement on the abolition of the prostration practice. It reported that King Chulalongkorn called for a meeting at the Amarin Winitchai Hall, with the presence of members of the royal family, senior bureaucrats, phu yai, phu noi and representatives of the armed forces. King Chulalongkorn said that since his enthronement in 1868, he had wanted to ensure the kingdom’s prosperity and to bring happiness to the royal family, nobles, bureaucrats, members of the sangha, and ordinary Siamese. Therefore, during his rule, the King wished to eliminate whatever could be perceived as acts of subjugation that would cause hardship to his peoples.

As reported in the Gazette, the King said:

In other major powers, in other great capitals of the world, in other kingdoms in East Asia, such as in China, Yuan (Vietnam), Japan, and in West Asia, such as India–these countries once enshrined the practice of prostration, commanding the subordinates to prostrate before their superiors (chaonai) and the nobles, just like what is currently experienced by Siam. But now, those countries have abolished the prostration practice. The reason behind this is that they acknowledged the necessity of rebuilding a more equal relationship between different groups in society–no more class oppression. Since the abolition, those countries have become more prosperous. In Siam, the practice of prostration reaffirms the existence of oppression which is unjust. Furthermore, there are other practices that must be abolished or at least reduced in their degree of strictness. But to eliminate all the practices at once will be impossible. The process has to be gradual and timely. At the end of the process, Siam will re-emerge as a much more prosperous kingdom.

The 1873 Gazette also reported that the King’s wish truly exhibited his generosity and compassion to bring happiness to his peoples, for them not to suffer any longer from the prostration practice. It said:

From now on, Siamese are permitted to stand up before the dignitaries. To display an act of respect, the Siamese may take a bow instead. Taking a bow will be regarded as a new form of paying respect. The dignitaries may first question the reason behind the abolition of prostration practice. They may ask: How will the change assist in developing Siam? They must know now that the abolition of this practice is indeed to show the world that Siam rejects any oppressive and unjust practice. Powerful countries which have been successful in refraining from oppressing their own peoples are now enjoying prosperity. Henceforth, members of the royal family and senior and junior bureaucrats who wish to have an audience with the King at his residence, or in public places, please adopt this new recommended practice as instructed by the King. His Majesty the King has assigned Than Chao Phraya Srisuriyawongse, his Regent, to enact this new practice for the Siamese kingdom.