Constructing the deviant ‘other’ – religious traditionalism in contemporary Malaysia 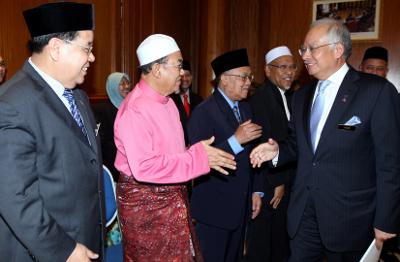 In December 2010, Islamic officials in Selangor detained 200 Muslims believed to be members of a Shia-leaning circle. The arrests were made following a raid on a shop in Sri Gombak (Selangor) by the Selangor Islamic Department (JAIS). In the past, alleged followers of Shiism have been placed under the draconian Internal Security Act (ISA), which before its abolition recently, warranted detention without trial. In 1997, seven Shia followers were detained for spreading deviationist teachings, and between October 2000 and January 2001, six Shia followers were also arrested under the ISA.

Arguably, the religious elite’s approach and attitude towards Muslims who do not share their ideology also operates through an orientation which sociologist Robert Towler describes as traditionalism. In his work The Need for Certainty (1984), Towler characterises religious traditionalism as the blind, emotional adherence to selected traditions transmitted from the past and a marked attitude that is non-questioning. In this style of belief, one cannot explain what is believed; rather, the best one can do is to recite or quote a verse from sacred texts. Furthermore, the selection of religious traditions inherited from scholars of the past are deemed absolute, immutable and binding, without need to justify the bases of selection amid the existence of different readings of the same traditions or other conflicting traditions. As Towler puts it, “The implicit plea which underlies traditionalism is not for questions to be answered, but for all questioning to be taken away and put under lock and key of a trustworthy authority.”

Traditionalism is predominant in the attitude towards Shiism and those deemed as ‘liberal’ Muslims. In 1996, that the religious authorities of the country only allowed one Islamic school of thought to exist, the Ahlus Sunnah Wal Jamaah (ASWJ). In the past, they were more relaxed on some sects within Shiism. The 40th Special Muzakarah (Conference) of the Fatwa Committee of the National Council for Islamic Religious Affairs Malaysia was convened on the 5 May 1996 to discuss the status of Shias in Malaysia. The committee agreed that an earlier provision “After discussing and deliberating on this working paper, the Committee has decided that only the Zaidiyyah and Jafariyyah Shia sects are accepted to be practiced in Malaysia” is abolished. As a result, Muslims in Malaysia must only follow the teachings of Islam based on ASWJ on creed, religious laws, and ethics. Any publication, broadcasting and distribution of any books, leaflets, films, videos, and others relating to the teachings of Islam that contradict the doctrine of ASWJ are to be prohibited and considered unlawful.

In essence, Shia teaching are deemed ‘unIslamic’ based on three grounds- theology, minority, and security. The main contention of the religious elite is the way Shia understands ‘Imam’, often referred to the infallible leader of the Islamic community. Shias are also deemed deviant because they encourage the short-term, contract marriages (mutah). To be sure, such views fail to see the diversity of opinions found amongst groups that identify themselves a Shia because not all Shias agree with the claims made in the fatwa.

In fact, a prominent contemporary scholar, Khaled Abou El-Fadl reckons that both Sunnis and Shias concur on the five basic pillars of Islam- confession of faith, prayers, fast, tithe, and haj. Apart from theological differences, Shia’s are also deemed as ‘deviant’ because they form a minority- both in Malaysia and also in the Islamic world generally. Hence, they are seen as not being part of the mainstream. Often, the Prophet’s hadith, “Muslim will break up into 73 sects. One will achieve Heaven the others Hell” is cited to justify this religious opinion.

Nonetheless, according to a prominent Indonesian scholar, Professor Quraish Shihab, there are other Prophetic Hadiths that problematises the dominant understanding of that Hadith. For instance, there is a Hadith which states that “Muslims will break up into 70 sects. All will achieve paradise except for one”. In fact, another prophetic tradition, narrated by Anas (the Prophet’s companion deemed authoritative by Sunnis) stated that, “The Muslims will break into 70 sects. All will go to paradise except az-Zanadiqah”.

The failure to grapple with these alternative traditions, or the context in which they were spoken, proves the dominance of religious traditionalism. Had the religious elite referred to Professor Quraish’s Sunnah-Syiah bergandengan tangan! Mungkinkah? (Sunni-Shia holding hands, a possibility?), which to date is arguably the best work on Sunni-Shia dialogue written in the Malay language, they would be exposed to many alternative traditions by the Prophet that are often ignored. Generally, it is a trait of traditionalism to deny other relevant traditions on similar issues that differ from the ones selected and upheld. Furthermore, if Shias are really the minority as often claimed, with figures cited often around 200-400 in Malaysia, how are they a security threat?

But the failure and the lack of interest to engage with good works from progressive Indonesian scholars, such as Quraish Shihab, or even Malaysian ones, clearly manifest traditionalism in itself. The Malaysian religious elite fear that Malaysia may turn to ‘Liberal Islam’ one day. Hence, the construction of the deviant ‘other’ can be demonstrated through the labelling of groups and individuals as ‘secular’ Muslims. Unsurprisingly, the ‘West’ is often blamed for the rise of ‘liberal Islam’. Nevertheless, such views dismiss the centuries old debate and intellectual engagement in the West and also amongst Muslims too.

Also, the perspectives of the groups and individuals labelled ‘liberal’ are rarely given full credit. Instead, their character and morality is questioned. Liberal Muslims are also deemed to use less authoritative sources, hence they cannot speak for Muslims and Islam. The failure to cite classical sources such as Tafsir Ar-Razi, Tafsir Al-Baidawi, Tafsir An-Nafasi, and Tafsir Al-Khaazin, or works of scholars deemed authoritative such as Yusof Al-Qardawi, Al-Mawdudi and Syed Qutb may earn the label ‘liberal’. Therefore, one cannot speak about alternative methodologies, including those that seek to reinterpret religion in the light of its universal principles and values, without being seen as Orientalist, secular and liberal. This explains why the works of many progressive thinkers in Malaysia, such as Syed Hussein Alatas, Chandra Muzaffar, Hashim Kamali, and Norani Othman, are marginalised.

However, traditionalism is not only a phenomenon in Malaysia, but is also dominant in other parts of the Islamic world. Khaled El-Fadl, whose work Speaking in God’s Name (2001), among many others, discusses the mode of thinking in fatwa deliberations and formulation on issues pertaining to women and law in Arabian society. Though the term ‘traditionalism’ is not used in his work, the traits of the mode of thinking, which he defines as authoritarian, bears very similar characteristics to traditionalism. Understanding controversies and issues through the lens of style of thought or orientations as such enables us to move the religious discourse beyond UMNO-PAS rivalry for the case of Malaysia. Arguably, both UMNO and PAS are largely traditionalists in their own ways when it comes to the conception of the Islamic state, gender, and the ‘other’.

In order to understand why traditionalism remains a dominant mode of orientation today, one has to understand the Islamisation process in Malaysia. The way Islam is understood today is predominantly shaped by the Islamic resurgence movement of the 1970s. This was the period PAS adopted the more fundamentalist stance, and UMNO began to bureaucratise Islam by building more institutions in the name of Islam. This movement had a greater impact on the urban areas and campus. This was the period when the Muslims began to question Western institutions and knowledge, and sought to replace them with ‘Islamic’ ones. During the resurgence movement, traditionalism was not challenged, but preserved in ‘modern’ manifestations. By and large, the young student activists during the resurgence mainly form the crux of the elite in contemporary Malaysia.

It remains doubtful whether genuine reforms can emerge from within traditionalism. However, the traditionalist religious elite do need to be constantly challenged by an orientation that not only focuses on literal injunctions and forms, but one that emphasises the humanitarian spirit, universal values and principles. What is perhaps more important is the need for the development of alternative orientation that is grounded in the rich and progressive intellectual heritage of Islam and other civilisations.

Norshahril Saat is a PhD student at the Department of Political and Social Change, College of Asia and the Pacific, Australian National University.