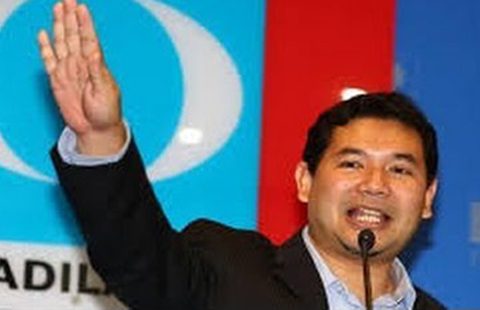 In conversation with Rafizi Ramli

Malaysian politics is on tenter hooks. On the international stage Prime Minister Najib has been widely praised for his commitment to a moderate and progressive form of Islam. But at home, this year alone, the ruling UMNO has agreed to cooperate with opposition Party Islam to introduce hudud law in Kelantan; Malaysia’s highest court has decreed that Malay-speaking Christians may not use the word Allah, even though they have done so for more than a century; a state Islamic department seized over 300 Malay-language editions of the bible then refused Attorney-General instructions to return them; and a senior minister declared that Malaysia was not a secular state.

On a related front, since May this year around twenty sedition charges have been laid or enquiries initiated, against opposition leaders, activists, university scholars, journalists and students – nothwithstanding that in July 2012 the Prime Minister promised to repeal this catch-all act, describing it as belonging to a ‘bygone era’.

The economy, meanwhile, continues to grow at around five per cent per annum, but is not matching achievements before the Asian economic crisis of 1997-98. Economists warn of tougher times ahead, particularly with rising inflation and a higher cost of living. The allocation of large handouts to cushion these problems limits funds available for development.

Can the opposition coalition, beset by its own internal and intra-party conflicts, help turn this situation around? In this video, New Mandala co-founder Dr Nicholas Farrelly discusses the state of democracy and politics in Malaysia with People’s Justice Party Vice-President and Secretary General Mr Rafizi Ramli.

Rafizi Ramli, PRK’s secretary-general and vice-president, is a 37-year old politician who has gained prominence for a series of corruption exposes. He is currently under a sedition investigation for a book he has written on Anwar’s second sodomy case, and has also recently been charged under the Penal Code over a statement he made in February alleging political attempts to create racial and religious discord in Selangor.