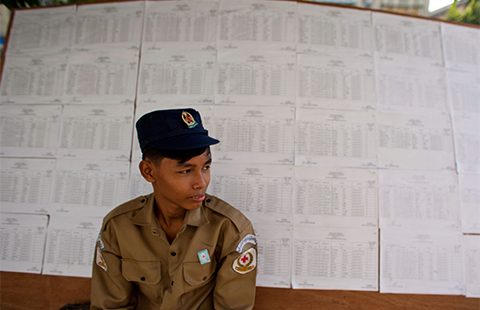 Credibility and the vote

Whether Myanmar’s elections will be free and fair is the question on everyone’s lips.

Challenges to a credible election in Myanmar are as real and complex as the sense of expectation surrounding the nation’s first free ballot in 25 years.

In allowing more than 30 million eligible voters to choose their representatives for the nation’s legislature, this year’s historic vote has evoked huge public enthusiasm for meaningful change in the country.

The participation of around 6,200 candidates from 93 political parties, as well as a large percentage of women and younger generations, has also helped raise hopes for a genuinely inclusive process where different segments of society are better represented.

The presence of international and domestic observers throughout the election process, and greater access for domestic and international media is also expected to ensure freedom and fairness.

But alongside this optimism are many potential pitfalls to guaranteeing a free, fair and peaceful election that also leads to a credible outcome for the people.

One of the key challenges is flawed voters’ lists. There are two issues involved in this; overstated lists (those with too many names) raise concerns about ballot box stuffing, while understated lists (those missing names) and missing ballots can deny eligible voters the right to vote.

These have already been highlighted by advanced overseas voting, which has been taking place since 15 October in polling stations across the world.

Many overseas voters encountered missing ballots and flawed lists. Their frustration has spread through social media networks like wildfire, overshadowing excitement and burning a lot of goodwill in the process.

The absence of timely and satisfactory measures to address these issues could further aggravate frustration and magnify suspicions about the election’s outcome.

To salvage its integrity, the Union Election Commission (UEC), in discussion with political parties, must come up with a solution. Due to time constraints, macro-level solutions are not practical. Instead the UEC needs to focus at the micro-level.

One possible solution that could be enacted before the nationwide vote on 8 November would be allowing village and ward administrators in each constituency to distribute voting tickets. These would be given to all eligible voters registered in local households and tallied against the voters’ list. Such a measure would guarantee that none of the eligible voters will miss their opportunity to vote.

Solving the second issue of ballot box stuffing is less problematic and can easily be enacted with the use of clear plastic ballot boxes. The presence of domestic and international observers would also enhance transparency.

In fact, the presence of domestic and international observers is one of the most encouraging aspects for this year’s election. Three international observer organisations – the Carter Center, the European Union, and the Asia Network for Free Elections (ANFREL) – are deploying around 170 highly experienced long- and short-term observers across the country.

These groups will be complemented by representatives from foreign missions in Myanmar, including the US, UK, Japan, Bangladesh and Ireland. Thousands of observers from eight domestic groups will also join in the election monitoring.

Observers will have access to any polling station across the country they wish to look at. They are allowed to monitor advanced voting in Myanmar on 29 October as well as the main poll on 8 November.

In addition, they will cast their eyes over vote counting, tabulation and the consolidation process. They can notify the election commission of any observed irregularities. However, election observers can’t interfere in dispute settlement processes.

It is absolutely critical that the election is conducted in a peaceful manner. Any complaint, report of misconduct or irregularity should be addressed fairly, transparently and in a timely manner.

In this regard, the Monitoring Committee of the Union Election should devote enough time to identify potential flash points and risk factors well in advance. Good coordination, transparency and timely management of issues are important in preventing and managing any potential conflict and violence.

Despite the challenges before, during and after the election, many are still cautiously optimistic about the upcoming vote and its credibility.

How can they not be? Political parties’ campaign trails, active civil society involvement in voters’ education and monitoring, a discursive environment enabled by freer public spaces, and the speed of highly networked social media have all empowered Myanmar’s voters more than ever before.

The main opposition party, Aung San Suu Kyi’s National League for Democracy, has also used its election campaign to mobilise a greater sense of confidence, emotion and hope for real change among the people. Any irregularity, weakness, deception or mismanagement of the election process will lead to disquieting unrest among the electorate.

This year’s election in Myanmar is significant not only for the country and its people but also for the country’s international partners who have invested a great deal of time and effort in the prospect of a democratic Myanmar.

It is the responsibility of all citizens, political parties, election management bodies and other key stakeholders and partners to work together to ensure a free, fair, inclusive, peaceful election that generates credible outcomes.

Freedom and fairness, transparency, good coordination, and timely management of any issues will ensure the elections’ credibility and success.

Thidar is a PhD scholar in the Coral Bell School of Asia Pacific Affairs and a member of the Myanmar Research Centre, the Australian National University.