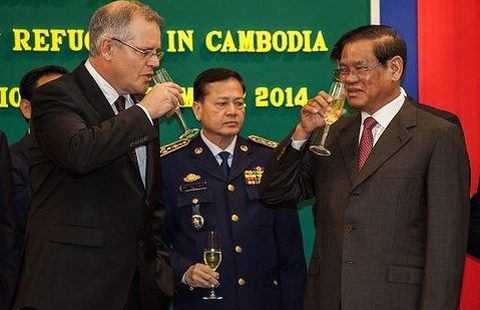 Australian Minister of Immigration and Border Protection, Scott Morrison (L) and Cambodian Minister of the Interior and Deputy Prime Minister, HE Sar Kheng (R), toast the signing of the “Memorandum of Understanding” relating to the resettlement of refugees.

Scott Rawlinson looks at the paradoxical nature of Cambodia’s approach to asylum seekers and refugees.

In September Australia and Cambodia signed a Memorandum of Understanding (MoU) facilitating the settlement of asylum seekers turned away by the former in the impoverished Southeast Asian nation.

The official line was that the move was humanitarian and aimed at boosting Cambodia’s image on the international stage, while simultaneously being part of Australia’s “regional burden-sharing solution”.

However, details about the agreement have been scant. The signing of the MoU was as brief as an earlier press release – sent out a mere two days before the deal was struck.

No information has been forthcoming about how Cambodia would cater for these potential new arrivals. The lack of details added to the lingering suspicion that more nefarious forces and motivations were in play.

Cambodia’s own poor human rights record and seemingly contradictory policy vis-├а-vis refugees and asylum seekers, has only compounded these suspicions. It must be remembered that Cambodia infamously deported 20 ethnic Uighurs to China despite being a signatory to the 1951 UN Refugee Convention.

So how do we explain Cambodia’s paradoxical approach to asylum seekers? It comes down to aid dependency and aid seeking, and dependence on China. These factors make such deals as the recent MoU with Australia de jour.

The Australian government’s public justification for resettling refugees in Cambodia was shrouded in “government-speak.” For them, the decision was part of a “regional burden-sharing solution,” a rather clumsy euphemism for the literal shipping of unwanted human material elsewhere in the Asia-Pacific.

Meanwhile, the Cambodian government’s decision to accept the agreement evoked feelings of incredulity, inexplicability and, even, irrationality. It is well documented that Cambodia has its own set of socio-economic and socio-political problems.

Tib Teav, Executive Director of the Cambodian Democratic Students Intellectual Federation highlighted several problems currently afflicting the country, including: a sketchy human rights record, poor living conditions and educational opportunities as well as a lack of job prospects, particularly for those who do not speak Khmer or possess a network of contacts through which they can find employment.

Others have concurred. Pointing to Cambodia’s restrictions on freedoms of expression, assembly and association, Phil Robertson, Director of the Human Rights Watch Asian Division, concluded that Cambodia’s government has not been “known for its charitable acts or its humanitarian protection.”

The absence of public scrutiny into the details underlining the MoU, and the much publicised unsuitability of Cambodia for receiving refugees, of which the above is just the tip of the iceberg, necessitate the need to excavate a little deeper and uncover the political as opposed to “humanitarian” rationale lurking not too deep beneath the surface of signatures and press releases.

As well as being aid dependent, the Cambodian government has shown itself not to be averse to proactive/reactive aid seeking. In Aid Dependence in Cambodia: How Foreign Assistance Undermines Democracy (2012) Sophal Ear detailed Cambodia’s increasing aid dependency.

Cambodia was utterly devastated by the combined impact of illegal bombing campaigns, civil war and the revolutionary Khmer Rouge regime. After the withdrawal of Vietnamese forces in 1989, foreign aid flowed in. In the post-UNTAC era, Cambodia received around US$5bilion in official development assistance (ODA), and between 2002 and 2010 the ODA was the equivalent of 94.3 per cent of central government spending. The inflow of loans and aid has helped sustain the government’s position with the unfortunate consequence of reducing its accountability to the populace.

Many promises of aid, grants and loans come with specific, reform-oriented conditions. Consequentially, the Cambodian government has shown itself to be willing to seek-out and take advantage of aid opportunities particularly when there are no-strings-attached or when the strings are interpreted as conducive to the government’s raison d’├кtre.

This reactive/proactive aid seeking behaviour has continued with the Australian government promising the Cambodian government US$35million in aid as a financial reward for acting as the host country for resettled refugees temporarily settled on the Pacific island of Nauru. It was a financial incentive that the government was happy to take up with the only conditions seeming to be the resettling of a small number (well below the alleged 1000+) of asylum seekers.

There were no requests for institutional reform, or pressure for greater freedom of expression. The apparent willingness to accept monetary incentives while overlooking its widely publicised lack of preparedness for resettling asylum seekers, showed that the government’s policy choices were not made to serve the needs of humanity, but rather the political needs of the Cambodian government’s own perceived notions of national/party interest.

So, far from being paradoxical, the welcoming of some refugees with open-arms and the rushed deportation of others are in fact two sides of the same coin. An important determining factor in the equation is China.

China is important for Cambodia both strategically and as a source of aid without undesirable conditions. China has been historically important as a counterweight to the encroachments, perceived and real, of Cambodia’s immediate neighbours: Thailand and Vietnam. As Heng Pheakdey (2012) has also pointed out, China is Cambodia’s top investor, a major donor as well as a key trading partner (bilateral trade between the two countries tripled from 2009-2011).

Bearing this in mind, a common thread emerges linking the deportation of 20 ethnic Uighurs to China and the seemingly contradictory Cambodian-Australian MoU.

Following the Urumqi protests of July 2009 in the Xinjiang Uighur Autonomous Region (XUAR), which saw an estimated 197 people die, mostly Han Chinese, and 12 people sentenced to death for their involvement, 22 Uighurs fled China and sought asylum in Cambodia. They were placed under the protection of the UNHCR.

At one point it was rumoured that the Uighurs might be given asylum as the government was taking into account the possibility of persecution if they were to return to China, and if the “issue” was essentially “criminal” or “political” in nature. However, on the night of December 19 2009, 20 Uighurs were deported back to China, with the other two unaccounted for.

Had the Cambodian government decided there was little likelihood of persecution or politically-motivated reprisals on their return? Or had they decided it was a “criminal issue” thus justifying their deportation in order to answer for their crimes? Probably neither. Instead it was the timing of the deportations that drew another picture for analysts and journalists alike.

A few days prior to the arrival of then Chinese Vice President (now president) Xi Jinping on 21 December 2009, the Cambodian government hastily rushed through alterations to the Sub-Decree on Procedures for Examination, Recognition, and Provision of Refugee or Asylum Status for Aliens in the Kingdom of Cambodia.

These alterations would effectively allow Interior Minister Sar Kheng to override other provisions including the right of appeal. With the Uighurs deported, any potential embarrassment for Cambodia’s powerful ally was eliminated, opening up the way for Xi Jinping to sign off on US$1.2billion worth of aid and loan agreements to Cambodia.

Regardless of local and international laws to the contrary, the political equation “solved” by Cambodia’s government placed the welfare of 20 ethnic Uighur asylum seekers well below both its need for aid money and a continued and strong bilateral relationship with the People’s Republic.

Thus, unlike the TV show Deal or No Deal, which is essentially a game of chance, Cambodia’s actions vis-├а-vis asylum seekers and refugees are somewhat more predictable.

Cambodia has, since the deportation episode, shown itself again to be willing to acquiesce to the will of China. For example, in its stint as chair of ASEAN, Cambodia complied with requests from China to keep the South China Sea dispute off the agenda. The incentive for doing so came in the form of a Chinese promise of millions worth of loans and aid.

An appreciation of both Cambodia’s aid dependency and its reactive/proactive aid seeking behaviour reveals that far from being incredulous, inexplicable and irrational, the government’s political decisions are based on an institutionalised modus operandi that are both a legacy and reproduction of Cambodia’s recent historical past.

In this game only the dealer and the offer on the table seem to matter; the other “participants,” be they ethnic Uighur, Afghanis, Iranians or Iraqis, are minor elements in the equation: deal or no deal?

Scott Rawlinson is a MA South East Asian Studies student at the School of Oriental and African Studies, University of London.