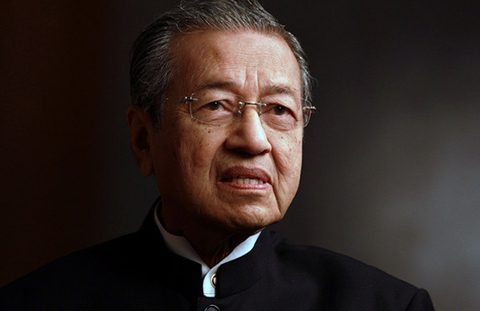 Dear Malaysia: Mahathir is no messiah Najib Razak is on the ropes and Mahathir knows this. But is he truly concerned about Najib’s scandals?

When does one know if a scatological ship with a cargo of lunatics, modern-day pirates, Ali Babas and scoundrels is sinking? Answer: when its top rats start bailing out into the oil-burning ocean.

The United Malays National Organisation (UMNO) ship has been listing for years, careening for decades. The flames now engulfing started in its engine room. The inferno’s worsening, and the bomba (fire department) is nowhere in sight.

Lim’s resignation was sudden. His appointment to the position last April had equally surprised. Malaysians hurled brickbats at him – a Chinese crony trying to save his Malay patron’s neck while eating up valuable public funds.

Najib, for his part, would have thought that picking a local to conduct his public relations malarkey would be more palatable to Malaysians, under the circumstances, than conscripting and paying millions of United States dollars to an American PR firm in New York City.

But Najib’s problems are deepening still. The more he vacillates over suing The Wall Street Journal for its exposé of the US$700m that had landed in his personal bank accounts – and what’s more linking the money-trail to the pilfering of state-owned 1MDB – the worse Najib’s guilt seems to be.

He’s growing more frantic about holding on as UMNO leader and prime minister of a country that’s obsessed with practicing racism and bigotry and renowned for its state-sponsored maniacal corruption – popular pastimes for the last 58 years.

When Najib almost lost his ruling coalition’s two-thirds majority to the then opposition Pakatan Rakyat in the 2013 general elections, he turned on the racist spigot. His brilliance almost culminated in national disaster following the Low Yat Plaza petty theft-turned-violent racial conflagration on 11 July.

Najib is no Midas. Everything he touches turns to dust. Or worse. He’s now on the ropes; always looking out for UMNO daggers aimed at his back, front and sides. Lim Kok Wing’s job was meant to win back UMNO’s Malay base before they dump him in droves. Perhaps Lim soon realised that Najib’s too far gone. Even Minerva’s owl has deserted Najib.

Malaysia’s disparate opposition parties are hoping Malays will take it upon themselves to throw out Najib and UMNO, particularly now that Majlis Amanah Rakyat or Mara, the state agency entrusted to advance Malay economic interests, and Tabung Haji, the state agency charged with collecting Malay savings for their lifetime pilgrimage to Mecca, have been found with their snouts in the trough over corrupt business dealings in Malaysia and Australia.

Critics say having failed the sniff test, Najib and his cronies have no place to hide. Wrong. They’ll be given sanctuary from investigation and prosecution by Malaysia’s corrupt and pliant police, judiciary and the other bodies presently investigating 1MDB’s non compos mentis affairs.

Only Lim knows why he dumped Najib. But he won’t soon forget the tongue-lashing he got from Dr Mahathir Mohamad, Malaysia’s former prime minister. Lim had personally advised Mahathir to quit publicly attacking Najib.

Biting the hand that had fed Lim’s business interests for years turned out to be his stupidest mistake. Whether the two will kiss and make up remains to be seen. Rest assured, however, there’ll be none of that between Mahathir and Najib.

Not when Mahathir’s political star is rising – again. It’s well into earth’s stratosphere. Najib’s, by contrast, has drowned in a sinkhole.

No question Mahathir’s going for the jugular, to oust Najib and his toadies sooner than later – before, Mahathir claims, Najib sells out the country. Looks like Mahathir has finally heeded George Soros’s advice to him during the 1990s Asian crisis.

Here’s the rub. In their muted desperation, and after having ripped into him for his overt racism, feudalism and crony capitalism, Malaysians like minions are lofting Mahathir as their new patron-saint, even over the jailed Anwar Ibrahim.

With Pakatan Rakyat dead, Mahathir is their new messiah, their savior from the sordid caverns of the UMNO miscreants and the wholly insignificant Barisan Nasional parties that make up the libertine ‘governing’ coalition.

There’s no irony here. In Malaysia, losers easily morph into demigods overnight. They’re quickly and wholeheartedly embraced as winners, as long as they hymn the same verse. Like Mahathir’s selective amnesia, Malaysians have chosen to not recall Mahathirism, his lording over them, instilling fear in them, and having fathered systematic and official corruption. Then, as now, they are again reverently bowing to the man.

Unlike The Wall Street Journal, The Sarawak Report and the leading local financial daily The Edge and their exposés on state corruption and Najib’s sticky mitts, Mahathir’s modus operandi has been to use his renewed clout – a gift from the gaffe-prone Najib and UMNO – to whack them over the head. His questions are angrier, his attacks on Najib and scattergood wife highly personalised. He has nothing else to offer.

But Malaysians are hugely gullible. They condemn history. And they love a sideshow. At this rate no-one, including the largely pro-opposition media, is likely to question Mahathir’s underlying motives for his salvoes.