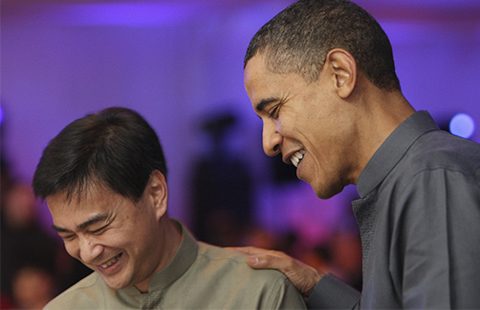 Chatwadee Rose Amornpat pens an open letter to President Barack Obama, calling for the US to sever military ties with Thailand and impose economic sanctions.

The Thai people wish to dispute the Thai junta’s declaration that the US government is meddling in the country’s political affairs and that “Thai people have been hurt” by recent remarks from Daniel Russel, a US envoy who criticised actions by the ruling regime.

Right-wing royalists have employed the same old line in justifying their illegal actions, including frequent coups, the imposition of martial law, and the current Article 44 which gives unlimited power to the junta chief, General Prayuth Chan-ocha.

We wish to thank you for scaling back the annual Cobra Gold joint military exercise with Thailand. In all honesty, please scrap the yearly military exercise in its entirety. This is a waste of US taxpayers’ money. Thai elites have been very ungrateful to your country for a long time. Please use such money to instead help the poor children of Thailand as such an undertaking would be more beneficial to the country and the US’s image.

The United States should impose more severe economic sanctions against Thailand. If possible, please remove Thailand from the list of “Most Favored Nations” in terms of importation of Thai goods, unless Article 44 is abrogated and freedom of speech is restored.

One of the root causes of all of Thailand’s problems and the country’s stalled democratic process is the despicable Article 112 of the Criminal Code. This is also called the lese majeste law, and prohibits people from making any comments or constructive criticism of the Thai king, even if such comments are based on the truth.

This unjust lese majeste law has effectively silenced Thai people from speaking their mind. Once convicted, it also breaks up families and loved ones for years. Most of those accused of lese majeste are nowadays convicted by Thai military courts. The trial is often a closed court session with no media allowed. Alleged perpetrators of Article 112 can be sent to jail for three to 15 years for each offense.

Hundreds are now in jails throughout Thailand. Some are now serving 10 or 20 years. This is a travesty of justice. They are not criminals but brave individuals who dare to speak against this barbaric and unjust law and those who benefit from it.

For example, Darunee Charnchoensilpakul was sentenced to 18 years in jail on lese majeste charges on 28 August 2009. The trial, conducted in secret in a closed court, saw her receive six years for each of three comments she made at a political rally. The case made a mockery of Thailand’s judicial processes. She is now serving her seventh year in Thai prison and is in poor health.

Darunee is now suffering from an acute gum infection and yet the prison warden has refused her proper medical treatment. This is a way to further torture her for criticising the so-called “Father of the Nation.” It is believed that her maltreatment would lead her to finally confess and seek a pardon from the Thai king. So far, Darunee refuses to admit that she did anything wrong.

Another 112 prisoner worth mentioning here is the case of Somyot Prueksakasemsuk, a former editor of a pro-democracy magazine who was sentenced to 11 years in prison for publishing an article deemed lese majeste. He, too, refuses to admit that he did anything wrong and is now in his fourth year in prison. Both distinguished individuals deserve a Nobel Peace Prize to say the least.

On any royal holidays such as the King’s or Queen’s birthday, and as recently as Princess Sirindhorn’s birthday this month, prisoners are routinely given a reduction of prison time; except lese majeste prisoners who will be serving their full term in jail.

Anyone can file a lese majeste charge against anyone and the police are required to investigate and often complete the process all the way to the court. Failure to do so will have serious repercussion to the investigating officers. Even though the King said in a speech in 2005 that he disagrees with this law, he has not done a thing to abolish it. He has all the power to do so. But nothing has been done so far.

The United States must take the lead in calling for the abolishment of this very unjust law or Thailand will continue to suffer. The EU, the UK, Australia, New Zealand, Japan, India and all Southeast Asian nations must also be united and impose sanctions until Thailand and the Thai monarchy abolish such a barbaric law.

This law is not an internal affair of Thailand. It is the affair of the world and every citizen of the world is obligated to tell the Thai King that enough is enough.

Thai royalists including the mass media often tell the world that the Thai King is well-loved by the people. Please tell them to abolish Article 112 and then see if this claim is still true.

Last but not least, the Cold War ended a long time ago. There is no threat of Communism any more. We understand the US government during the Vietnam War created a monster out of King Bhumibol in order to serve as a beachhead against Communist China.

But now, China is acting more like a big capitalist than the US, and many democratic countries do not need the Thai monarchy. Thai people are craving for a true democracy, not a warped democracy with a king as head of state.

That’s why I implore you to impose economic sanctions against Thailand’s ruling junta, until their dictatorial Article 44 and the lese majeste law are abolished.