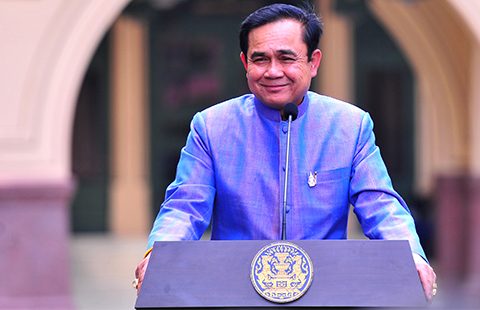 Dissent and dictatorship in Thailand

Thailand is now a country where a young mother will sleep more than 10,000 nights behind bars for insulting the king.

But despite that, in a speech at the UN late last month, Thailand’s junta leader and interim prime minister, General Prayuth Chan-ocha, outlined his military government’s commitment to human rights.

“Thailand has always accorded priority to protecting and promoting human rights for all groups of people,” Prayuth told the annual General Assembly in New York.

It was an exercise in irony.

Since his military takeover on 22 May 2014, in a coup that ousted the democratically-elected government of Yingluck Shinawatra, the right to free speech and political protest has been dramatically stifled.

At the same time, there has been a notable increase in lese majeste cases – which see alleged offenders tried under controversial laws aimed at protecting the country’s monarchy from defamation, insult and threats.

The severity of punishment for those who are found or plead guilty in these cases has reached record highs, with some prison terms handed down by the country’s military court spanning 30 years.

Resistance to the junta’s rule is simply not tolerated.

In this podcast, ANU researcher Tyrell Haberkorn discusses dissent and dictatorship in Thailand, highlighting the increased criminalisation of opposition and decreased political rights since the May 2014 coup.

“Despite the claims of the dictatorship of a desire to return to democracy, their actions indicate something quite otherwise.

“Since the coup, at least 782 people have been summoned and detained by the junta, at least 479 have been arrested for political activities, including at least 209 for peacefully protesting.

“There have been at least 53 new cases of lese majeste.

“This criminalisation of dissent is accomplished through the use of the law and the courts, orders of the junta, the broad powers first afforded through martial law and later through the constitution, and the unspecified power that flows from the barrel of a gun.”

Listen to Haberkorn’s full talk in the player above.