The past year in Laos has been far from business as usual. Yes, high economic growth, development megaprojects, and attendant controversies have continued apace. And, yes, there have been more major international events, notably November’s Asia-Europe Meeting (ASEM) in Vientiane, to keep the image of an emergent Laos in the news. However, a series of unusual events – climaxing in recent weeks with the expulsion of an international NGO director and the suspected abduction of a highly respected Lao Civil Society Organization (CSO) figure – suggests the country’s continued emergence as a member of the regional and international community is being accompanied by challenges to the Lao People’s Revolutionary Party’s tight control over political discourse, a key source of its authoritarian power since 1975. Unbothered by mounting negative press coverage abroad, the response by Lao authorities to such events has been to shut down dissent through harassment, dismissal, and sanction.

It is worth summarizing these events briefly. In May the director of the Academy of Social Sciences, Khampheuy Panmalaythong was dismissed for his 2011 comments to the National Assembly (NA), in which he questioned the relevance of Marxism-Leninism in Laos’ education system. The major surprise was not his dismissal – his remarks struck at the heart of official doctrine – but that he made the comments at all. While there is often criticism of what might be called development issues (over displacements and evictions for resource projects, official corruption, etc.), public criticism of the party, the political system, or the leadership is almost unheard of. Since his comments, Dr. Khamphuey has published an academic article in the institute’s journal questioning the relevance and effectiveness of one-party systems, implicitly a far more serious critique of the political status quo, although he did not advocate multi-party democracy for Laos. Time will tell if and how this subsequent analysis will be dealt with.

In June, a group of rural farmers from southern Sekong province were arrested and jailed for their activities in opposing a Vietnam-Laos rubber plantation project, after their customary lands were seized and they were left without land for crop production, forest product collection, or livestock grazing. Earlier, in 2011, the farmers had travelled to Vientiane to submit their grievance to the National Assembly Petition Unit. The group had also been interviewed by a Lao National Radio call-in program, Talk of the News, which the Lao Government subsequently cancelled in January 2012.

In the lead up to the 9th Asia-Europe Meeting Summit of Heads of State (ASEM-9) held in Vientiane from 5-6 November, an Asia-Europe People’s Forum (AEPF) was organized by Lao and regional civil society organizations in cooperation with a division of the Lao Ministry of Foreign Affairs. Laos only recently permitted the establishment of local civil society organizations – called non-profit associations (NPAs) – even if they continue to be closely regulated, monitored, and sometimes closely connected to the government. Whilst a relative freedom of speech was noted in the preparatory Lao provincial consultations for the AEPF, once the AEPF was underway in Vientiane it became apparent that Lao security personnel were filming individuals at the workshop and taking unwanted photographs. At least one Lao civil society member was intimidated and felt threatened in response to personal comments made by Lao officials during the forum. These issues and incidents unnerved several other speakers sufficiently for them to withdraw from the event, and few other Lao NPA members ended up speaking at the AEPF. The tensions surrounding the AEPF suggest that, while some within the Lao government have embraced the idea of a functioning civil society, others see it as a threat to established interests, and are willing to act on this.

Then, early in December, as has been widely reported, Anne-Sophie Gindroz, the director of the Swiss NGO Helvetas, was expelled after criticizing government repression of civil society in a personal letter addressed to the development partners of Laos. Gindroz wrote:

… real freedom of expression and assembly are not afforded, and those who wish to exercise their constitutional rights and dare to try, often do so at their own peril faced with intimidation, false accusations and increasingly unlawful arrest. The media are censored and, people are forbidden to hold peaceful assembly/demonstration. Even in Burma – this is no longer the case … There are serious constraints on freedom of expression. Those raising critical issues are considered as opposing the government. A climate of fear is maintained to ensure self-censorship…

The expulsion of Gindroz appears related to her activities around the AEPF meeting. Referring to the AEPF controversy, Gindroz commended those who “were brave enough to share their challenges openly”, remarking that the non-profit associations “who supported them to participate are being investigated still to this day.” Once again, what was surprising about these remarks was their rarity and forcefulness. The self-censorship to which Gindroz referred typically extends to the international community (including, it should be noted, academics). 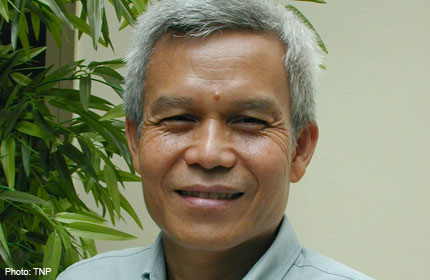 The most recent incident, widely discussed in the press and in online forums, is the December 15th disappearance of Sombath Somphone (above, source), a senior and highly respected civil society activist in Laos, while driving home in Vientiane. Compelled to respond by the circulation of security camera footage of the incident, the Lao News Agency (KPL) has released a statement suggesting Sombath was pulled over for a routine traffic check – before, apparently, being kidnapped and driven away in a separate vehicle, in the direct presence of uniformed police officers. Released by the Ministry of Foreign Affairs, the statement speculates that a business dispute might be to blame, although most think this to be implausible. Links are instead being drawn between Sombath’s disappearance and his involvement with the controversial AEPF, particularly his support for people who made statements advocating for the rights of villagers who are suffering from the loss of their customary lands and resources. As Sombath’s wife has reiterated in public comments, government officials were also involved with the National Organizing Committee of the AEPF, so the event as a whole should not have been tainted. Sombath’s case was discussed at an event on December 21st at the Thai Foreign Correspondents Club (see here, here, here), and has been the subject of comments, letters and diplomatic statements in a number of countries.

An increasing amount of speculation is directly linking Ms. Gindroz’s expulsion and Mr. Sombath’s disappearance to the AEPF controversy, the assumption being that senior party and/or security officials have launched a major crackdown against those involved with AEPF. If true, this would not bode well for Mr. Sombath or his Lao NPA colleagues.

As always in Laos, a growing list of questions remains. But, more broadly, a few things stand out with respect to this series of incidents. First, it is clear that the monopoly long enjoyed by the Lao leadership over public political space is, ever so slightly and gradually, being eroded. The reasons are not hard to see. It was inevitable that, in order to pursue its trajectory of foreign investment-funded resource-based economic growth coupled with international cooperation and aid, the party-state would have to make some concessions, however limited, to the emergence of civil society. Functioning NPAs are one of the norms, however variable, of modern constitutional statehood, and until very recently all organizations within Laos were obliged to be connected to the state. In many cases NPAs may still not be independent of the state but, together with a more outspoken National Assembly, critical voices are being heard more widely than before. While many within Laos, including individuals within the government, recognize the benefits of a functioning civil society and developing the “rule of law,” more conservative (and coercive) forces would apparently like to nip this unwelcome efflorescence of independent mindedness in the bud, before it gets out of hand. The contest, it seems, is not just between the foreign/Lao civil society, on the one hand, and the Lao state on the other, but is also taking place within the Lao state. Of course, just where and between whom these political contests are happening is a far more difficult question to ponder.

Second, although there is ample evidence (without drawing any concrete conclusions about Sombath’s disappearance) that disciplinary forces have so far responded in a heavy-handed fashion to dissent, there may be limits to this approach if Lao leaders wish to retain the country’s current development trajectory and its positive international reception. The government’s plan is based not only on tapping resources – natural ones domestically and financial ones internationally – but on retaining the country’s image as a good – even charming – global citizen, as exemplified by graciously hosting international events like ASEM and being a responsible regional and international partner. Somehow, despite one of the most restrictive political spaces in Asia, Laos has not typically been lumped with Myanmar or even Cambodia as a questionable partner in business or development. Yes, concerns are regularly voiced over corruption and getting the benefits of economic growth to the people, but Laos is rarely the object of international condemnation like that associated until very recently with Myanmar. To put this another way, there seems to be little doubt that newly fashionable Myanmar will “steal” a lot of Laos’s tourism industry; Laos could do without Myanmar’s international pariah status in return. At least some within the party and certainly the government will be squirming as Laos receives increasing amounts of negative international media coverage over these recent human rights cases.

But, third, and most cause for concern, political leaders and security forces in Laos may care less for international image than sending an unequivocal message to the nascent civil society sector and any others that wish to publicly question state policies or their implementation. Although overt government crackdowns are uncommon in post-socialist Laos, where most policing is done from within, they are not unheard of. One thinks specifically of the imprisonment of internal party critics in the early 1990s, the disappearance of student protestors in 1999, and the disappearance/abduction of Sompawn Khanthisouk from northern Laos in 2007. In the past, such clampdowns have had the desired effect of stifling perceptions or hopes of change, however modest, and reinforcing the ever-present, but usually implicit, threat of coercive force against dissenters. If recent events form part of a systematic response by senior levels of the party leadership, it seems the bad old days, when extra-legal repression and impunity were the norm, may be back (or never quite went away). Such actions might be viewed differently today, however. Many years after local non-profit organizations began to emerge in China, Vietnam, and Cambodia, the Lao authorities, faced with the inconvenience of dealing with similar groups, seem to be employing similar methods as its post-socialist neighbors in an attempt to control and repress the new political space that, however tentatively, is emerging in Laos. If a glimmer of hope emerges from such an analysis, it is that, with farmers and activists refusing to acquiesce in the face of intimidation and repression, these countries possess far more extensive and dynamic civil society movements than the nascent one in Laos.