Photo by Walter Spies circa 1936, retrieved on Edward Herbst's website

Documentation, Restoration, and Repatriation? Reflections on a dance film screening for the ‘Bali 1928’ project

Bali 1928 is an ongoing international and interdisciplinary project established by American ethnomusicologist Edward Herbst in 2002 to “research, find, understand, document, explain, restore, re-release, and repatriate the first published recordings of music in Bali along with rare film footage and photographs of musicians and dance-drama performances from the 1930s”.

With support from the Sydney Southeast Asia Centre’s Regional Mobility Fund, a packed audience at the University of Sydney was able to get a privileged glimpse of Herbst’s found and restored footage of Balinese dance as filmed by the likes of renowned musicologist Colin McPhee and his anthropologist wife Jane Belo, pioneering visual anthropologists Margaret Mead and Gregory Bateson, and art collector Rolf dé Mare and art historian Claire Holt. These films, mostly silent (unless dubbed over), were curated by Herbst to centre around the theme of “Gender, Cross-Dressing, and Androgyny in Balinese Dance”, Herbst presented on the same theme to great acclaim at the Margaret Mead Film Festival in 2016.

The visuals, moving in just about every way possible, were accompanied by enthusiastic and engaging “live” narration by Herbst as he regaled contextual information and anecdotes of the films. While it was an evening of many images, the principal image I took away was that of Herbst assiduously combing the corners of the Earth, from archives in Europe and the United States to remote villages in Bali, in this decades-long project. The two hours flew past, and we left under the impression that there was still much, much more to be said. 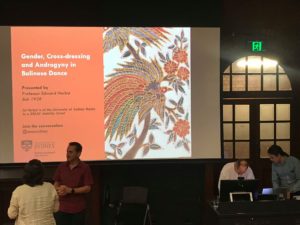 I have little knowledge of Balinese art forms, and struggled a little to keep pace with the immense technical vocabulary Herbst used in his narration (indeed, part of Herbst’s role in this project is to ascertain, with much difficulty and hard work, what specific form of dance or music was documented at the time, and label such detail to future audiences). This did not prevent me and others from being entranced by the stunning choreography – a word perhaps too inflexible in this context – of arched backs, hand gestures, incredible facial expressions, and turned hips. Click below for one of the videos of renowned male dancer I Made Sarin that Herbst showed to us, available on the Bali 1928 YouTube page.

I was, I admit, flushed with a little bit of ‘archive fever’, swept away by the depth, breath, and passion of the archivistic impulse of the project. A moment of dissonance interrupted my excitement, however: a close-up image of a female dancer’s face, amid a crowd of her bare-breasted fellow performers in preparation of their make-up and hair. She glances cheekily at the camera lens, with an enigmatic expression. This was the first time in that evening that a ‘subject’ had acknowledged the camera, the filmmaker, and by extension the “ghostly audience” of the future (inadvertently or otherwise). It im/mediately made me feel like a voyeur that had been caught red-handed, whereas before I had seen these performers and their performances as cultural objects, enacting a bodily repertoire that, in its documented status, provided an invaluable resource for researchers, practitioners and enthusiasts, or “Baliphiles”. The mediation of the process came to the fore at that moment.

So while Herbst has described the Bali 1928 project’s output as “bukti”, or audiovisual empirical evidence of a cultural past that the Balinese themselves have seemingly forgotten, the idea that anthropological documentation can ‘capture’ and ‘apprehend’ a moment in time, no matter how meticulously recorded, is problematic. As Fatimah Tobing Rony (2006) points out in her incisive critique of the anthropological practices of Mead, Bateson, and Belo, there is a real danger of the erasure of the imperialistic context of the documentation process itself (interestingly, Rony opened her article with a film screening of Mead and Bateson’s film on Balinese trance dance, as “the only Indonesian in a darkened room full of Indonesianists” [5]). As Herbst revealed in the screening, Mead and Bateson had commissioned the dances they filmed, instead of filming something that was ‘naturally occurring’ (the presence of any ethnographer, and the selection process of documentation itself would of course beg the question of whether any anthropological observation can be so, a critical issue that has occupied scholarly debate in the field). They had also cast particular kinds of people, namely young and beautiful women, in atypical roles in the dances.

The gendered and political implications of this (what Rony has termed as the “story of conversion” for the silenced Native Woman) was not addressed by Herbst, who admittedly did not have the time to elaborate. But an ethical and critical reflexivity is needed in this incredible and important project – a project that places “repatriation” as the end of a long list of mediating processes beforehand (“research, find, understand, document, explain, restore, re-release”) – both for the practice of documenting and filming, and for the archivisation itself, which, as Jacques Derrida reminds us, “produces as much as it records the event” (1995, 17). What are, for instance, the ethics of display to an international audience of these eroticised bodies under the Western anthropological gaze that, as Herbst recounted, some descendants were embarrassed to acknowledge? There are no easy answers to any of the myriad issues in such a repatriation project, and I sorely wished there had been more time for a question-and-answer session or even more funds for Herbst to have come with a Balinese member of his research team. Fortunately, Herbst is generously offering to spend more time with postgraduates for a seminar in his visit to discuss precisely such issues, including that of copyright. The Perspectives on the Past team and I are looking forward to a robust discussion.

Nien Yuan CHENG is a PhD candidate at the University of Sydney’s Department of Theatre and Performance Studies. Her doctoral research on Singaporean oral histories touches on the performance of citizenship, neoliberal storytelling and embodied histories and memories. She is co-founder and editor of Perspectives on the Past in Southeast Asia.