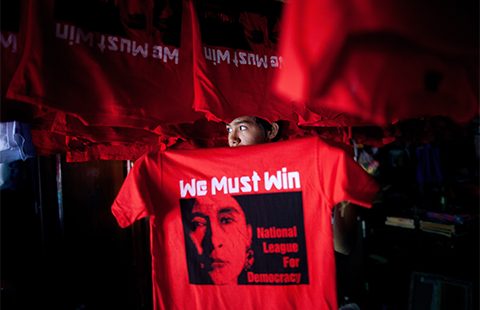 This column was published by The Myanmar Times on Monday, 9 November 2015

The cold hard reality is that Sunday was just the beginning of the next round of political competition. Once the votes are in, the heavy business of negotiation and repositioning will rumble forward.

This will be hard for many people to accept. Surely, the election will allocate power based on the people’s will? If only it was so straightforward.

The first task for those holding high political ambitions will be to tell the story about what the election result means. It is no surprise that during the campaign this already began, with all sides seeking to claim a premature mandate based on scenarios that serve their purposes.

For Daw Aung San Suu Kyi the claim that she can run the government even if she is barred from taking the presidency is one such pre-emptive move. The obvious constitutional obstacles require a certain amount of fancy footwork.

On the other side, we have her opponents suggesting that the National League for Democracy needs broad support among other forces to make a credible administration. The suggestion is that even a strong showing at the polls cannot guarantee power for a prospective government.

What these currently unreconciled positons mean is that even if yesterday’s vote offers a clear result, the horse-trading and jockeying for position will last for a while.

I fear that there is much potential for miscalculation in this process, as nobody has been forced, in recent times, to find the comfortable middle ground.

While the votes won from the people will count for a lot, in the final calculations they will be just one part of the broader story. The excruciating grind of ceasefire negotiations shows just how hard such politics can be.

What really matters is the stranglehold on key legislative and executive functions enjoyed by the military.

In practice, this power flows from the National Defence and Security Council, at least half of whom will still have an armed forces background in 2016. Ministerial responsibility in defence, internal security and border affairs will also be retained by the Tatmadaw.

Civilianisation will only be possible within quite strict limits and that will be hard for some NLD boosters to accept. Coming up with a government that balances all of the different powerful interests seems prudent. It is less clear whether it will be possible so soon after the election campaign.

Next there is the challenge of getting those elected to serve in Nay Pyi Taw to accept such day-to-day compromises. Will the ones who miss out on power be prepared to politely applaud the victors? If the winner presumes to take all the spoils for themselves all residual goodwill among runners-up could quickly fade.

One of the advantages of politics since 2012 is that the NLD has been prepared to play second fiddle to the Union Solidarity and Development Party. That has not been easy. It is a credit to the NLD hardliners that they have generally tolerated their impotence. Their savviest operators appreciate that it has offered a much-needed opportunity to learn the ropes in Nay Pyi Taw without taking on too much of a burden.

The weight of the burden changes, though, as soon as the serious negotiations begin. These negotiations will determine who becomes President, who takes the roles of Speaker in the Amyotha Hluttaw and the Pyithu Hluttaw, and who fills out the cabinet.

There will also be parallel negotiations around a large number of other senior legislative, bureaucratic and judicial appointments, at both local and national levels. Unwinding the legacy of military rule is taking time, and it remains an erratic process.

What we sometimes forget is that the topsy-turvy character of political re-alignment actually helps to build resilience and create opportunities for mutual understanding.

This is apparent in the NLD’s resolve to get involved with Naypyitaw politics. It is also part of the story of the military’s ongoing retreat from direct political management.

On both sides old positions have been watered down, while new chances to get to know each other have emerged. This can get lost in the heightened emotions of an election campaign but it will be a crucial factor as soon as the votes are fully counted.

What it all means is that from today onward there will be no point in expecting everything to flow smoothly. Not only is that unrealistic, but it may not even provide an outcome in the best interests of the Myanmar people.

The fact that Daw Aung San Suu Kyi has sat at the same table as Thura U Shwe Mann and U Khin Aung Myint on so many occasions over these recent years needs our attention. She will have to draw on all that experience of dealing with military men if politics in the months ahead is going to work in her favour.

Nicholas Farrelly is director of the Myanmar Research Centre at the Australian National University, a Fellow at the ANU Coral Bell School of Asia Pacific Affairs and co-founder of New Mandala.