On 15-17 November 2009 the International Network of Engaged Buddhism (INEB) held their “Festival of Peace and Social Transformation,” in Chiangmai, Thailand, in order to celebrate the 20th anniversary of the organization. The mornings of Friday, Saturday, and Sunday were devoted to panels on key issues of Engaged Buddhism and the organization of INEB. On Friday there were a series of panels dealing with the history of INEB– their successes and failures. Saturday’s panels consisted of key trends in Engaged Buddhism such as economic justice, environmental justice, nationalism and ethnicity, and gender issues. On Sunday panelists discussed the future of Engaged Buddhism and INEB–the vision for the future of the movement with a focus on new programs and youth involvement.

The panels were presented in the morning at the International Meditation Center connected with MahaChulalongkornrajavidyala Buddhist University (MCU) and Wat Suan Dok. The afternoon consisted of a series of group discussions surrounding the issues brought up in the morning panels. I was able to attend the Saturday and Sunday morning panels of the conference. The presenters were Engaged Buddhists themselves, all with particular issues they were working on and familiar with. Each presenter presented on issues dealing with the topic under discussion as well as with a view to the problem through the lens of their country and cultural background. Thus the presenters’ ideas were based on their experiences working in the world. What I noticed from this format was that much of the information presented was a reporting on the situation of the individuals’ particular program or nation. There was much focus on the description of problems and how modern forces are working against a cure. It was all very interesting and saddening to hear about these global issues but it made me think that the focus should be more on solutions than problems. The mission of Engaged Buddhism is that it is Buddhism applied to solve the world’s problems. I thought the format would have been more effective if the focus had been on the Buddha’s teachings and how to apply them. Then in the discussions people could bring up their issues as case studies to test the application of a particular teaching of the Buddha. But starting from the specific problem didn’t lead to much thought of solutions. Some of the presenters mentioned some key Buddhist terms such as The Four Noble Truths, suffering, interdependence, but this was not done as a major point of the talk.

In addition to this idea, the conference also made me think that there should be more connection between academics writing about Engaged Buddhism and Engaged Buddhists themselves. Many of these key terms have been thought-out in interesting ways in a variety of books (such as The Great Awakening and The New Social Face of Buddhism) but these ideas were not mentioned. The presenters were using their own experiences to discuss their issue when there is much help from academics (David Loy, Kenneth Kraft) already available.

While on a break outside the conference I talked with some of the young student monks at MCU (pictured below). They had the exact opinion that I had. They wanted to hear more about how to apply the Buddha’s teachings rather than about specific problems. They appreciated when a presenter did bring up a Buddhist concept but thought discussions should have been consistently rooted in these ideas. 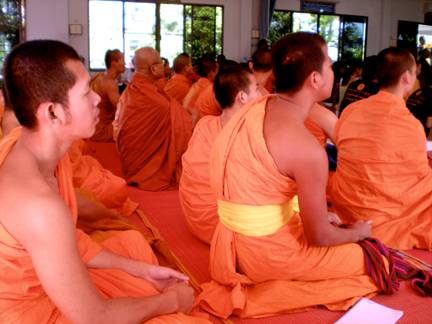 I hope the important movement of Engaged Buddhism and its most prominent organization, INEB, can move in this direction of incorporating scholarship and Buddhist concepts. Many Engaged Buddhists are doing very important work but perhaps this could be magnified further by more communication rooted in the teachings of the Buddha.

Brooke Schedneck is a Ph.D. candidate at Arizona State University. She owns the Wandering Dhamma blog where this post was first published.