The United Nations International Anti-Corruption Day ceremony held in Vientiane on December 8 sought to demonstrate that there was an acceptable public space for the discussion of issues considered politically sensitive by the Lao Government. Its encapsulation in a fanfare of empty rhetorical condemnations by high-ranking officials and foreign dignitaries, however, showed that this space is defined by the very politics it should instead be debating with the use of practical examples. This essay argues that the prevailing public culture in Laos needs to be overhauled if corruption is to be effectively combated. 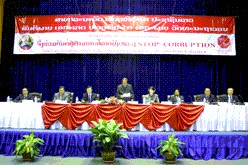 The Lao response to corruption differs from that of its East Asian neighbours with similar single-party political systems. Both Vietnam and China have embarked on anti-corruption campaigns resulting in the public prosecution of senior officials. The recent public indictment of Shanghai’s top Party official on corruption charges (Zhigang 2006) was seen as a reassertion of power by the central Chinese Communist Party in Beijing. In Vietnam, a major scandal involving a prominent development bureau prompted the resignation of the transport minister and the arrest of his deputy (Harkey 2006). Whatever their political motives, such campaigns have not been undertaken in Laos.

The usual state media articles published around this year’s ceremony gave corruption a rhetorical beating, calling it a harmful drain on the economy and exhorting ‘civil servants, officers, mass media, businesspersons and all citizens [to] gather together to monitor corruption’ (KPL 2006). The Lao media were keen to point out the international character of corruption as ‘an age-old problem affecting all nations’. While the national news agency Kaosan Pathet Lao mentioned that Laos ranked 111th out of 163 countries on the Transparency International Corruption Perception Index, neither it nor the English-language Vientiane Times newspaper mentioned any specific examples of corruption in Laos (Ekaphone 2006).

International organisations also use the Vientiane Times to discuss corruption in equally rhetorical terms. A UN article on anti-corruption day in 2004 took up half a page listing dictionary definitions of corruption and describing legal conventions but said nothing about the Lao situation (UNODC 2004). On the opposite page, no doubt enjoying the irony, the newspaper published a Chinese-sourced article on UN Chief Kofi Annan refusing to resign over his alleged involvement in the Iraq oil-for-food corruption scandal (Xinhuanet 2004).

A key element that seems to escape both academic and government analysis of corruption is the role of the public in debating it, defining it and exposing examples of it. Governments of all political persuasions may argue that there is no need for the public exposure of corruption because law enforcement is conducted by the state. But who enforces the law upon the state? Even in authoritarian Vietnam and China, recent anti-corruption campaigns have been tied to the notion of public confidence in government.

The role of the public is quite central to the international definition of corruption. The public is, after all, the social body that is perceived to be losing out as business and government officials use state resources for their own private purposes. Transparency International defines corruption as ‘the misuse of entrusted power for private benefit’ (Stuart-Fox 2006:59). Just who power is entrusted to and by whom it is entrusted is crucial to understanding corruption. In a recent journal article Senior Laos Historian, Martin Stuart-Fox, argues that ‘the environment of corruption in Laos is a product of political culture generated by the structure of political power, its priorities and the way it is exercised’ (Stuart-Fox 2006:66). For Stuart-Fox, the traditional politics of patronage, which see a few powerful political figures maintain power by satisfying the private interests of their clients, is the root of corruption.

If the political culture itself determines that power is entrusted by private political and business interests then it becomes hard to distinguish between the ‘misuse’ of entrusted power and the normal operation of the system itself. The Lao public sphere in the narrow political sense resembles the absolutism that Jurgen Habermas identifies before the emergence of a rational-critical public sphere. Leaders ‘were the country and not just its representatives…they represented their lordship not for but “before” the people’ (Habermas 1989:7-8). Habermas argues that the modern public sphere provided a space for free discourse about government that ‘replaced the celebration of rank with a tact befitting equals’ (Habermas 1989:36). Without a sphere of debate about the ‘proper use’ of resources among those who do the ‘entrusting’ a political culture may appear to be paralysed by corruption because normative politics and political corruption cannot be distinguished. So where is the forum for such a debate in Laos? The government media is certainly not shy of talking about corruption. Over 100 issues of the Vientiane Times have some mention of corruption on a national or international level in them since 2001. Despite its high profile as a topic of discussion, very few specific examples of corruption are mentioned and almost no one is exposed as being corrupt. In one of the only examples of this, the Lao language Pathet Lao daily newspaper reported that a corrupt customs official was arrested in March 2002 for smuggling 38 unspecified contraband items (Ounkeo 2002).

The Lao government’s answer is that it is working hard to discuss corruption in its state-run media and that it is in its own interests to prevent corruption. A wave of articles on corruption swept the Lao print media in 2004. A commentary in the Lao language Party newspaper, Paxaxon, defined corruption as ‘taking possession of state or organization property or taking advantage of possession of public property with bad intentions’ calling this a major problem for the state (Ounkeo 2004c). A report in the Pathet Lao argued that corruption among state employees and party members has ‘let the revolution down’ (Ounkeo 2004b). Current Vice President and then Prime Minister, Bounnhang Vorachit, said that fighting corruption was harder than the fight for national independence (Ekaphone 2004a). The Vientiane Times published a public discussion about the lack of regulation in Lao society in its ‘Streetwise’ forum quoting random citizens who noted the lack of consciousness of the laws among the population (Soudalath 2004). Yet again, no specific examples of corrupt practices or people were mentioned.

The low salaries of state officials are often cited as the reason for corruption (Ounkeo 2004a). The argument is made that an impoverished government official living in a crumbling housing compound on the outskirts of Vientiane who decides to charge a few extra thousand heavily inflated Lao kip for his services each month in order to keep his children in school is not corrupt. “It is our right as officials, it is how we earn enough money to survive”, a Lao colleague once told me. He shared little in common with the son of a senior Lao army general caught running a fraudulent investment operation which had swindled over US$20 million by selling fake share options to witless overseas investors (Lyall 2003). The incident was only reported in the Australian press, although the general’s son was apparently arrested by Lao police.

In one of the more investigative Lao media articles it was proposed that customs officials be frequently transferred to new posts in order to prevent them from developing corrupt exchange relations with local traders (Ekaphone 2004b:1). Because of the strict definition of corruption as pertaining to state resources, customs officials could not be prosecuted because the informal payments they received from traders on top of official duties were not considered state resources and it was therefore not clear that they were engaging in corruption (Ekaphone 2004b:2). Again, the practice was made to appear suitably ambiguous so that a specific example of corruption was not identified.

The media is reticent to report about specific cases of corruption because it is itself caught up in the grey area of law enforcement in Laos. Despite the consideration of a draft law by the Lao National Assembly in 2003, there is no media law stating the rights and responsibilities of journalists. “The law was not passed because the government does not think it is the right time”, said a media official. Only general government regulations protect the few daring overseas-trained journalists from the wrath of any officials who may be convinced that their positions of power give them the right to divert state resources for private use.

The official justification for the control of the media at an international workshop on media freedom in Laos in 2005 was that most Lao people simply do not have the ability to participate in an unregulated public sphere. The state control of the media is necessary because ‘the overall capacity of citizens is not so high, their interest in the media is limited, and the level of the rank and file working in the media is also limited’ (BV 2005). The government does not yet recognise the emergence of an urban middle class of professionals, artists and functionaries that is the precondition for Habermas’ bourgeois public sphere.

A law will not magically transform the ability of the media to report on corruption. However, it will set an important legal imperative recognising the role of greater public participation in the national and global media. A corresponding dialogue on corruption would certainly be a fresh alternative to the current status quo where international organisations publish indexes and hold ceremonies which are as remote to the lives of most Lao citizens as they are to addressing the underlying causes of corruption. Despite its global ranking, Laos does not even appear in Transparency International’s report on its Global Corruption Barometer, a global survey of attitudes towards corruption incorporating the views of 59,000 people in 62 different countries (Transparency International 2006). As of yet, there are no Lao voices in the global public sphere either.

Ultimately, practices of governance are defined as corrupt because academics, governments and international organisations that participate in a global civil society define them as such. The Transparency International index catches the attention of governments because it ‘names’ specific countries as being more or less corrupt. This process is not being reproduced in microcosm within these countries. The more encouragement the Lao government can be given to approve and enforce a media law that provides space for the discussion of corrupt practices and people, the more relevant international indexes and official ceremonies may become to the people of Laos.

BV (2005) Speech at the Workshop on Freedom of Expression and the Role of the Media. Vientiane, February 25.

Ekaphone Phouthonesy (2004b) ‘Customs under fire at checkpoints’ in Vientiane Times, October 12, pp. 1-2.

Habermas, Jurgen (1989) The Structural Transformation of the Public Sphere; An Inquiry into a Category of Bourgeois Society. Cambridge: The MIT Press.

Soudalath Phonpachit (2004) ‘Above and below the law; people talk about a pervading lack of regulation in society’ in Vientiane Times, August 12, p. 10.