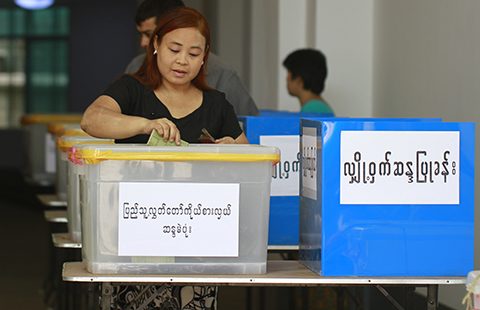 Ethics and elections in Myanmar A woman votes in Myanmar’s 2012 by-election. Photo from Wikimedia commons.

A ground-breaking conference on the sensitive topic of ethics and elections was held in Myanmar’s new capital Naypyitaw at the end of September.

The conference was jointly sponsored by Myanmar’s Union Election Commission (UEC), and the Konrad Adenauer Foundation, a German based organisation that has been working at promoting democracy in Myanmar for several years.

The conference aimed to expose politicians, party officers, and media representatives from Myanmar to some of the more challenging issues confronting the nation in its scheduled 8 November 2015 simultaneous elections for two houses of the national parliament and fourteen regional assemblies.

In all, some 150 people attended with the head of the UEC, U Tin Aye, a retired Lieutenant General, giving the opening address.

Both major parties (the National League for Democracy and the Union Solidarity and Development Party) were present. Participants were drawn from across the whole country, except Rakhine and Tanintharyi regions. The Arakan National Party from Rakhine was invited, but was unable to attend.

Speakers came from the leading international organisations who are providing extensive capacity building training for the elections, as well as Myanmar NGOs. Their presentations confirmed that, technically at least, Myanmar is well prepared for this major election event.

Various aspects of risks for a free, fair and credible election were openly discussed. Unusually, the Myanmar political context was described comprehensively by Professor Dr Thuzar Myint from the Department of International Relations at Yangon University.

The importance of ensuring elections are as politically inclusive as possible was also considered. International scholars offered valuable insights into how different religious groups and minorities are effectively engaged in elections held in countries such as Turkey, the Philippines, and Malaysia. These comparisons were of interest to conference participants.

The valuable role played by free media in helping ensure free and fair election practices and procedures was also emphasised. I myself spoke about Australia’s experiences trying to avoid problems such as vote rigging, and bribery, and ensuring truth in election advertising and appropriate candidate behaviour.

Trevor Wilson is a former Australian ambassador to Myanmar and a visiting fellow in the Coral Bell School of Asia Pacific Affairs at the Australian National University.