As Jakarta heads to the polls to elect a governor on Wednesday, will ethnicity, religion, race, and other social divisions play a major role in determining the outcome? Yes, but despite massive protests led by Islamic groups, it’s not about religion, writes Nathanael Sumaktoyo.

Does SARA (Indonesian abbreviation for ethnicity, religion, race, and other social divisions) matter in the Jakarta gubernatorial election?

If we follow the news, our answer likely will be yes. Demonstrations by Islamic groups and the blasphemy charge against incumbent governor Basuki Tjahaja Purnama (Ahok) are just but a few examples. But eyes can be deceiving. What does the data actually tell us?

A survey experiment I recently conducted can shed some light. The question is simple: Does Ahok’s ethnicity and religion influence voters’ support for him?

Current surveys have been unable to answer this question satisfactorily because they ask respondents the wrong questions. They use questions like “What are some factors that influence your vote preference?” or “Does a candidate’s ethnicity or religion influence your support for him?” That is a naïve way to probe such a sensitive issue. Respondents are likely embarrassed to portray themselves as a non-rational actor influenced by ethnicity and religion. Or, even if they are not embarrassed, they might not be aware that their preference is influenced by the ethnicity and religion of a candidate.

To avoid that mistake, I employed a survey experiment, which enables us to estimate the effect of Ahok’s ethnicity and religion by holding other factors constant through randomisation. The survey was conducted between the middle of November and early December. A stratified random sampling was used to obtain a sample of Jakartans aged 18 or older. A total of 1,163 Jakartans were reachable when they were first contacted by the interviewers. I dropped non-Muslim respondents and analysed only 1,016 who were Muslim.

It should be noted that my primary purpose is not to predict vote shares like surveys usually do. My concern is with the internal validity or causal relationship, and not with the external validity or generalisability, or the extent to which my research findings can be applied to other settings beyond my originally test. Nonetheless, characteristics of the sample largely resemble ones of the population, which improves our confidence in the generalisability of the study. Figure 1: Characteristics of the sample and the population. Figure 2. Wordings in the experimental groups.

Thanks to randomisation, the analysis is very straightforward. To estimate the effects of reminding respondents of Ahok’s ethnicity, religion, and the advice from some ulemmas, we only need to compare the levels of support in the four treatment groups against the level of support in the control group. 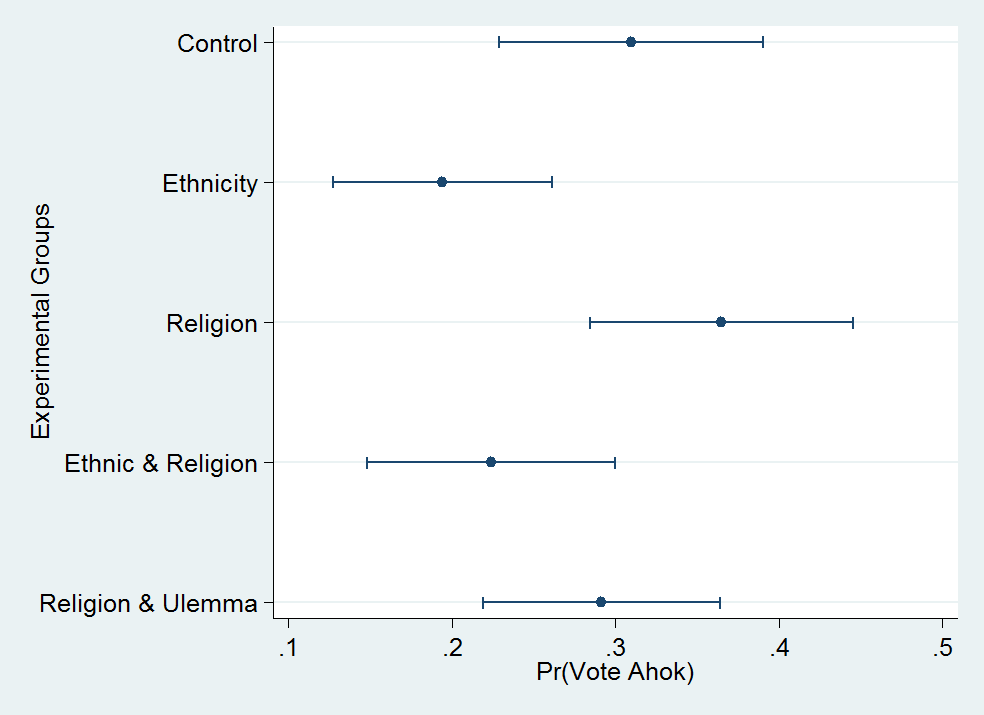 However, there is a 10 per cent decrease in the level of support for Ahok when respondents were reminded that Ahok is a Chinese Indonesian. Ten per cent is obviously not a trivial number in a close race like the one happening in Jakarta now.

What does the finding mean? It means that SARA indeed matters in the Jakarta election. But, contrary to what we might have assumed, the part of SARA that matters is not the religion part. It is the ethnicity part. More respondents reject Ahok because he is a Chinese descent than because he is a Christian.

If we only look at the demonstrations, the finding might be surprising. But, on hindsight, it should not be. In part as a legacy of Suharto’s racial policies, Chinese Indonesians are still often regarded as second-class citizens. Religion might matter less in this election than we think, but that does not mean that Indonesia is already doing well. As the experiment demonstrates, there are still resentments toward certain ethnic groups and these resentments carry with them political consequences.

Nathanael Sumaktoyo is a doctoral student in the Department of Political Science at the University of Notre Dame, USA. He specialises in American politics (first subfield) and comparative politics (second subfield). Concurrent with his PhD, he also has completed a Master’s degree in Applied and Computational Mathematics and Statistics (ACMS), where he focused on Bayesian analysis and computational statistics.

A version of this article was also published at the Indonesia at Melbourne blog.