Nation and national soul-searching, despite the romantic connotations behind the term, is always a painful and unsettling process.

A free nation, especially one with a colonial past, will always need to recalibrate its moral position to provide an existential standing. Therefore, a liberation story that is buttressed by a ‘good triumphs evil’ narrative is needed: a new nation sprung from the buds of history, cleansed and desanitised from its past, ready to take on a new course without any entanglements of the past; a ‘New Contract’, but not a renewed contract, so to speak.

This is until it realised, the ‘New Contract’ could not be sustained without hinging on the past, albeit a resented one. A void in history is too borderless for a nation-state with stoic and constitutional borders; be it geographical and psychological, and hence the national discourse is prone to relapse into ‘us-versus-them’ hostility expected of a liberating nation. The familiarity of achieving a benchmark point of defeating evil (independence) was sought after to achieve cohesion and coherence for a dominating and identifying factor, and therein lays the highly emotive but not necessarily patriotic force of ultra-nationalism. Its digression from patriotism is because those who capitalised on such forces to place imaginative captivity on the masses are usually not patriots themselves. The civil wars and genocides in former African colonies are testaments to that.

Malaysia proves to be an interesting case-study of this “relapse” condition because of its relatively peaceful transition to Independence. The shouts of Tunku’s Merdeka, although invigorating in spirit, did not provide a clean slate for the national conscience to be built upon. The peaceful transition also meant that there was no post-traumatic stress disorder that originated from a brother-in-arms resistance against invaders for the citizens of diverse origins to direct a common recuperation effort at. Instead, the infantile nation was torn between the political majority rural Malay psyche that the country will “return” to a not-explicitly defined pre-colonial order Malay feudalism and a ‘New Order’ that in practice by the nascent government made little effort in differentiation from the colonial structures.

In other words, there was, and is an expectation for “wrongs” – no matter what they were or are – to be corrected to return the country to a perfect equilibrium before any new projection to the future could be made. The little participation its citizens had in Malaysia’s Independence had left a void being created within the colonial shackles of mind and economics, and it is within this void, contestation of nationhood and identities occurred, as can be seen from the politics of race, language and subsequently, religion that arises.

Ironically, almost every imagination being thrown into the void during that time was retrospective in nature. The Malays longed for a revived domination of the nation’s politics untampered by British intervention, while the Chinese expected a return to the autonomy and free-handedness they enjoyed in commerce and education during colonial governance. Unsurprisingly, the clash of such nostalgia produced an outcome of retributory nature; the New Economic Policy (NEP) in focus of “correcting” racial imbalances was born. It was a relapse towards the discourse of Malay special position and supremacy, a privilege that was guaranteed by colonial governance to placate Malay fears in the face of a changing nation, demographically, economically and culturally.

Understanding this, Islamist group Ikatan Muslimin Malaysia (ISMA)’s classification of the Chinese as being an invading force, the Nam Tien or “southbound invasion” in challenge of Malay or Islam’s indigenous position can be seen as just another episode of the relapse syndrome. Southeast Asia’s indigenous religion is not Islam to begin with since it is pre-dated by Hinduism. ISMA, however, had made significant efforts in revising of this fact. The fact is that, the invasion from China in usurping the physical or religious status of the locals, simply did not happened.

Therefore, the claim that the Chinese are “wrongs that should be corrected” is merely a throwback in a sense. As the vitality of the NEP wears off following the decline of Mahathir’s developmental state, a substituting agenda was needed for “retributory justice” to continue in maintenance of the capitalist elite power structure, and it was in this light a militaristic revisionist account of the Chinese influx into Malaysia was created. 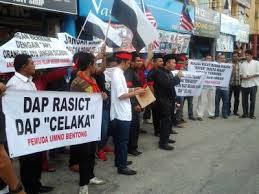 Although not entirely original, the conceived idea of the Chinese as being an “invading” force did have some salient features. Using an invasion analogy, the need to stress Constitutional justifications of Malay and Islamic supremacy (a common strategy employed by right-wing ethnocratic organisations such as UMNO and Perkasa) was diminished. The approach taken to externalise Chinese citizens of Malaysia had shifted the psychology of the siege mentality to one that is even more rudimentary, one that hardly sees co-existence as an amenable outcome. This is because as the logic goes, the threat is foreign and expansionist in nature and had to be repealed to preserve sovereignty.

Placing Islam in the centre of it, in full cognisance of the religious conservatism of the Malays as well as the outright secularist orientation of the Chinese was only a natural move. A frontier that is both distinctive and violent was enforced between the two communal groups. The demonisation process, not unlike the “history textbook” treatment that was subjected to most colonial powers, was undertaken. A new struggle against foreign evil, the others, is to be embarked; a theme that has mythical origins, also made relatable for the Malaysian context by Islamic concepts like the jihad (although not in the Salafist jihadist sense).

As iterated above, soul-searching is a painful process, especially when history was kept like a gaping hole, filled in by State-controlled narratives that were insufficient in richness, complexity and inclusiveness. Dominated by retro-looking agendas (Mahathir’s Vision 2020 was a breath of fresh air but it collapsed in the face of growing inequality, communal integration and most importantly, the competence expected of a capitalistic developed nation), Malaysia’s perpetual search for divergent collective motives were vulnerable to be seized by the romanticism associated with puritanism and evil banishment, for it is these sentiments that fuelled a citizen’s anger against immigrant workers, free trade agreements and foreign cultures.

The inability of authoritative figures to put a stop to all of this, or the civil societies to provide an effective diversion, will only spell trouble for the already economically struggling nation. Despite years of official forward planning, and government mantras of a brighter future, the forward looking narratives have been undermined by the lack of credibility and authenticity of its proponents and implementers. It also makes its present proponents appear hypocritical.

It is dangerous for Malaysia to not have a credible and authentic forward looking narrative. But it is even more dangerous for the ‘Muslim Malay’ (however that is defined) – without this credible and authentic forward looking narrative – to ask the question “Dari mana datangnya saya?” (“Where do I come from?”), and to look to the pendatangs (immigrants) for an answer.

Nicholas Chan is a King’s College London graduate in Forensic Science. He is currently a socio-political analyst with the Penang Institute. He can be reached at: [email protected]