As in many other foreign countries, farewell ceremonies for the late King Bhumibol Adulyadej were organised on 26 October 2017 by the local Thai temple in Germany’s southern town of Munich, where in one of its rich suburbs the new King Maha Vajiralongkorn has his part time home.

About 700 to 1000 expat Thais, some of whom even attended from nearby Austria, gathered at the Marienplatz, Munich’s most visible and prominent public space in its city centre. The ceremony in front of a large image of King Bhumibol was quite formal, with four monks leading the chants and seven Thai soldiers (who study at the local military university in Neubiberg) solemnly collecting and emptying the full bowls of sandalwood flowers where the mourners placed them. After initial religious chants and traditional dance, groups of give people organised in rows, and briefly coached in the proper manners, presented sandalwood flowers into bowls, which were regularly emptied by 5 of the soldiers. The event lasted approximately 3½ hours and ended after one more dance. 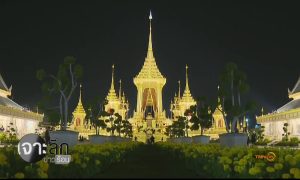 Two Thai scholars on what the weekend's cremation of King Bhumibol signifies for Thailand. 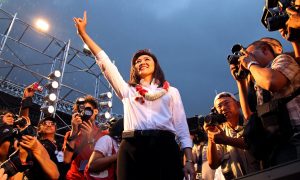