Malaysia was established as a constitutional federation in which the individuality of its 13 states was to be clearly maintained. Over the years however, state powers have gradually eroded. Local council elections were abolished in 1965. The Senate, meant to be the ‘house of the states,’ now skews to the centre with more federally-appointed than state-appointed members. The Federal Constitution 1957 itself contains several articles that allow for a strong central government, for instance providing that federal law prevails over state law in the event of inconsistency. Other institutional and legal changes have further weakened state autonomy.

Given these constraints, political shifts at the national level invariably affect outcomes within states in a number of ways, not least the distribution of institutional and fiscal resources. The COVID-19 crisis crucially tested the boundaries of federal-state relations when decisions from the centre were not always received well by state governments. States also took the initiative to manage public health in unconventional ways. A longstanding dispute over autonomy in the East Malaysian states of Sabah and Sarawak has also created opportunities for new political alignments, as well as reignited the debate over oil rights. The author’s research unpacks these federal-state tensions and explores their implications and ramifications in further detail in the downloadable report below. 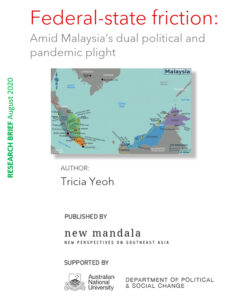 Malaysia is politically centralised, with both administrative and fiscal decision-making gravitating towards the centre. Any political change at the federal government level invariably impacts upon downward resource distribution. The political crisis in 2020 did precisely that: machinations at the national level directly precipitated changes in several state governments.

PN gained the lion’s share of states with 8 in total: Kelantan and Terengganu (the 2 East Coast states led by PAS), Perlis and Pahang (already UMNO states), and the 4 wins of Johor, Malacca, Perak and Kedah. This left PH with only 3 states, down from 7: Selangor, Penang and Negeri Sembilan. Within the newly-acquired PN states, individuals affiliated with PN immediately replaced PH nominees within the boards of government-linked companies (GLCs), and for local councilor and village committee appointments.

Given the highly centralised nature of resource distribution in Malaysia, states affiliated with the federal government invariably stand to gain by being granted access to greatly demanded resources. Members of parliament newly in opposition have had their constituency development funds (CDFs) effectively cut off, affecting their ability to provide aid for their constituents amid the pandemic. At the height of the COVID-19 crisis, there were reports of unequal access to food basket aid at both the national and state level. Punishing the opposition in discriminatory resource allocation seems to have been a tactic employed by both sides of the political divide. In Selangor, a PH-controlled state, PN-aligned state assemblypersons were also denied special COVID-19 funding allocations.

Opposition-led states will also invariably face difficulties in funding projects. For instance, Penang’s Transport Master Plan may no longer receive federal guarantees for the bonds needed to fund the large infrastructure project. Given highly-charged corruption investigations against former Chief Minister Lim Guan Eng and his recent arrest, the entire project’s viability may be under question.

The pandemic’s effects on federal-state relations

The COVID-19 crisis has offered an important study of the legality and constitutionality of Malaysia’s three-tiered system of government. When the federal government made plans to open up the economy under a relaxed version of the country’s movement control order, it did so in a way that did not meaningfully include the states. 9 out of 13 states chose to defy the order, including 3 that were aligned with the PN government (Pahang, Kelantan and Sarawak). There are two opposing legal views: one considers that going against federal law was extra-constitutional, while the other considers that states were within their full legal rights.

Based on the first legal perspective, states would be considered in contravention of federal law because the decision to open up the economy was carried out under the Prevention and Control of Infectious Disease Act 1988 (Act 342)—a federal law. A related federal order defines an “infected area” to include all states and federal territories in Malaysia. The constitution does require that states comply with federal law, stating that they should not “impede or prejudice” the federal government’s exercise of power.

The other perspective emphasises that the Federal Constitution defines “public health, sanitation and prevention of infectious diseases” within the Concurrent List, where authority is shared between the federal and state governments. Further, the Local Government Act 1976 gives local governments (which come under state purview) the authority to preserve public health and prevent the outbreak and spread of diseases.

Whatever the legal constraints, many state governments went ahead to take COVID-19 management into their own hands. As Welsh demonstrates, Sarawak, Sabah, Penang and Selangor stand out, but many others also disbursed their own aid packages, developed their own contact tracing applications, created state-level COVID-19 crisis teams and co-operated well with federal health agencies.

States are playing a crucial and underreported role in managing the twin public health and economic crises—so much so that their experiences put to question whether the constitutional boundaries continue to be relevant. States, despite not having full legal control over public health and the economy, are able to meaningfully contribute to these areas anyway.

Longstanding federal-state tensions over oil rights have also arisen over the past months, affecting both the national political uncertainty and the response to the pandemic. The Eastern oil-producing states of Sabah and Sarawak, along with Kelantan and Terengganu on the eastern coast of Peninsular Malaysia, have in recent years escalated their demands over rights to oil and gas resources.

Given that the current PN government is operating on a razor-thin majority (PN’s recent appointment of the speaker in parliament received a majority vote of just one), both sides of the political divide are continuously wooing MPs from Sabah and Sarawak. Negotiations over hotly contested issues such as oil have invariably turned political.

Both Sabah and Sarawak have previously demanded increases in oil royalties, and it has been reported that current Prime Minister Muhyiddin is willing to make these concessions. National oil-producing company Petronas played a crucial role in easing federal-state tensions by paying a highly-disputed sales tax to Sarawak, which was reportedly linked to the premature departure of its CEO. Petronas, through revenues raised from oil and gas resources, contributes 19 percent of national revenues annually. Fiscal pressure will likely increase in the near future as the economy struggles to pick up amid a global recession on the back of COVID-19 and the US-China trade war.

Further evidence of East Malaysia’s prominence amid national political contestations came with former premier Mahathir Mohamad’s sudden announcement that he would support Sabah Chief Minister Shafie Apdal as a prime ministerial candidate, in a bid that would seemingly recognise the role and contribution of East Malaysia at the national level. National-level politics directly led to the dissolution of the Sabah state government at the end of July when 13 state assemblypersons defected to join a PN-aligned political leader. The nation will soon see the first full state-wide election since the change in government this year.

What are the long-term prospects for federal-state relations? The pandemic has shown federal and state governments can work in harmony, and that states can emerge with innovative solutions to public policy problems. These recent experiences may even provide state governments with the impetus to explore how they can deepen their autonomy in domains outside of public health.

Ultimately though, political alignment with the federal government determines outcomes at the subnational level. One PN minister has already encouraged Sabah voters to support the state coalition which shares the aspirations of the federal government in the upcoming state election. Meanwhile, Mahathir Mohamad’s announcement in early August of plans to establish a new political party, with early signs that several state leaders will defect from Bersatu, may further affect the stability of state governments. Malaysia’s dual political and pandemic plight has shed light on federal-state relations, but has not yet substantively altered its arrangements.