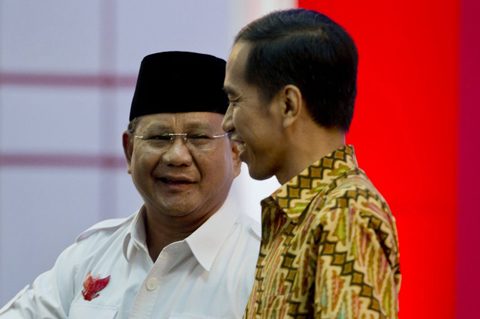 The good news is that both candidates didn’t rock the boat. They committed to maintaining the status quo, both saying they would pursue the “thousand friends and zero enemies” path embarked upon by current president Susilo Bambang Yudhoyono.

The bad news is that for both candidates foreign policy just seemed so… well foreign.

Throughout the war of words, both Jokowi and Prabowo didn’t take foreign policy seriously, treating it as an afterthought to domestic political considerations. In particular neither candidate had really thought seriously about the many serious issues making waves right next door in the South China Sea.

It wasn’t the best look – particularly when a lot was at stake in this debate.

Jokowi entered the debate as an underdog. While still more popular than Prabowo, the later has been able to make a rapid push in the last couple weeks to narrow the gap on his rival. As Burhanuddin Muhtadi, the executive director of the respected polling company Indikator Politik Indonesia, tweeted a couple of days ago, the situation is now “critical” for Jokowi. In essence, the gap is closing and it would not be surprising if in the end Prabowo squeaks by and claims the presidency.

It seemed to confirm assertions by Prabowo camp’s that Jokowi is simply a puppet, a weak candidate, who can’t do anything without running mate Jusuf Kalla babysitting him. As a result, Jokowi’s main goals in the third debate were to try to erase the poor impression from the second presidential debate and to show that he could be a decisive commander-in-chief.

On the other side, Prabowo has been trying to use the presidential debates to show himself as an even-tempered, mature politician with a big heart, even willing to acknowledge his opponent when he believed he was right.

Prabowo tried to dispel the fear that he was just another intemperate dictator-in-making that would clamp down on Indonesian democracy. And thus in this third debate, his goal was to show himself as a great statesman while trying to make sure that the people’s impression of Jokowi as a weak leader stuck.

But, Jokowi performed much better than last week. After affirming his commitment to Indonesia’s free and active foreign policy, he spotlighted the plights of Indonesian workers abroad and right from left field, declared his support for UN membership for Palestine.

Prabowo looked as if he was caught off guard by Jokowi’s new found assertiveness. While Prabowo didn’t perform terribly and there were some shining moments, such as when he highlighted extreme poverty and lack of job opportunities in Indonesia as the main reason for domestic workers seeking their fortunes abroad, he focused too much on banal assertions that Indonesia had to be strong and prosperous to be respected on the global stage.

He didn’t even try to elaborate, when questioned, on what he believed was Indonesia’s national interest – aside from safeguarding the integrity of Indonesian territory, protecting its resources, and preventing or stopping leakage; what he claims to be a vast, almost uncountable sum of money being moved from the country overseas. In fact he kept using bocor (leak) as the answer to so many questions that by the end of the debate, it sounded like a sleek slogan slapped on the side of a used-car salesman’s suitcase.

At the same time, Jokowi’s performance wasn’t flawless either. He kept getting bogged down in specifics, especially when he was talking about drones. His ‘droning’ matched Prabowo’s repetitive rants against ‘leakage’.

By the end of the debate though, optics-wise, Jokowi won. He looked more in command and even managed to show that he could be decisive when he wants to; a strong counterpunch to claims about his weakness . Prabowo, on the other hand, had a decent performance but he tended to be repetitive. Moreover, while his agreeing with Jokowi was great last week due to its shock value, this week it lost its novelty and made him actually look weaker and not in control.

But so much for the show – what about the substance?

If anyone wants to use this debate as a marker of both candidates’ foreign policy, they will be left empty handed. There was simply no discussion or debate on grand strategy, on Indonesia’s foreign policy goals in Southeast Asia, on ASEAN, what to do about growing tension in South China Sea, and so on. You get the point – there weren’t any.

Jokowi kept talking about the need for good relationships and diplomacy for every single problem facing Indonesia without delving into specifics, while Prabowo kept giving vague answers about making the country prosperous and strong first to be respected, as well as the need of Indonesia to defend its “national interest”. The debate seemed to pick up steam when Prabowo asked Jokowi about border disputes between Indonesia and its neighbours. Like a one-trick pony, Jokowi replied “diplomacy”.

More worrying was Jokowi’s non-answer on the South China Sea; he said Indonesia should not get involved if it could not help solve the problem due to fear of getting China offside. But as Prabowo, correctly, argued, the South China Sea problem should involve Indonesia because China’s claims also overlap with its own claims.

The issue of an ASEAN Economic Community, which was discussed briefly last week, was only dealt with in passing, instead being used to bounce the discussion back to the need of domestic reforms to increase competitiveness – instead of really going into why we signed the agreement in the first place.

Jokowi also talked about having ambassadors act as trade representatives, even though Indonesia already had trade attaches – whose function is to promote trade. Prabowo said the idea was “too theoretical”, before offering his far more practical ‘solution’; you guessed it, “close the leakage”.

To make matters worse Australia escaped the debate unscathed. While the wiretapping scandal was raised, and there were some mild jabs at Australia’s lack of trust of Indonesia (Prabowo even suggested Australia had a phobia to Indonesia), Tony Abbot should rest easy knowing that both candidates actually agree on the importance of improving the relationship , while advocating for greater education and cultural diplomacy.

So in essence, watching this debate was like watching paint dry – pretty slow, very boring.

While it is tempting to attribute the lack of vigour on both candidates lacking mastery in the subject matter, or simply the unwillingness of both candidates to cause problems with neighboring countries, I think the real reason was to avoid offending President Susilo Bambang Yudhoyono.

While the president is growing unpopular, he is still popular enough that his Partai Demokrat managed to snag around 10 per cent of the votes during the legislative election last April. With opinion polls suggesting the presidential race to be close, none of them can afford to offend the president, whose support may be pivotal in deciding who will win.

But as it stands currently, Indonesia clearly looks set to lose when it comes to its standing on the world stage, once one of these less than worldly leaders assumes office.

Yohanes Sulaiman is a writer, analyst, lecturer at Indonesian National Defense University. He tweets @yohanessulaiman and blogs at http://ysulaiman.blogspot.com and http://centerforworldconflictandpeace.blogspot.com