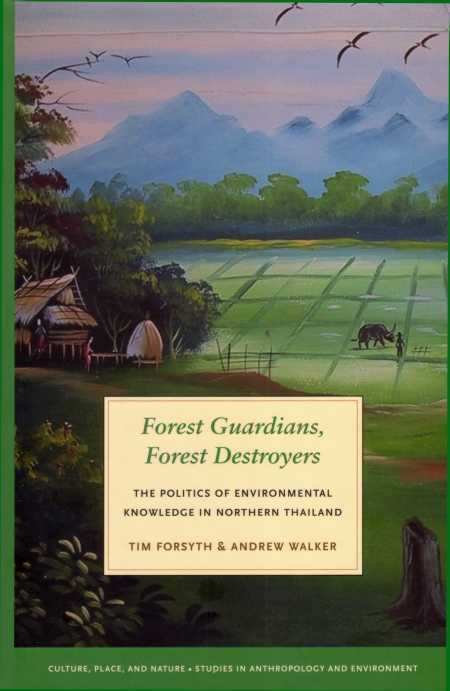 Yesterday I received an exciting package in the mail. It was a copy of the just released book that Tim Forsyth (of the London School of Economics) and I have authored on environmental politics in Thailand (Tim Forsyth and Andrew Walker. 2008. Forest Guardians, Forest Destroyers: The Politics of Environmental Knowledge in Northern Thailand. University of Washington Press.) The book is a critical discussion of debates about deforestation, hydrology, erosion, chemical use and biodiversity in northern Thailand. (I have taken up some of these issues in previous posts on New Mandala). Here is a brief extract from the Conclusion (pp. 226-227).

This book has sought to illustrate how environmental politics in [northern Thailand] has become dominated by environmental beliefs that are simplistic, misleading, and highly selective. Since at least the 1960s, a variety of observers have claimed that the upland zones of northern Thailand are in a state of urgent environmental crisis. While environmental problems do exist, and interventions are required, the common belief that upland agriculture is causing immense damage to uplands and lowlands is simply not supported by available evidence. Yet, despite this lack of evidence, the narrative of upland crisis is widely popular and highly persistent. In Thailand, newspapers, television, government statements, and books regularly refer to the belief that population growth, deforestation, and commercialization are causing water shortages, soil erosion, declining biodiversity, and agrochemical contamination. The message is underlined by roadside signs in the north, installed by the government, which report in matter-of-fact terms that deforestation causes drought and undermines agricultural livelihoods. In the streets of Bangkok, colorful murals outside schools repeat this message with stark images of deforested hillsides, desperate farmers, threatened wildlife, and contaminated streams.

This vision of upland crisis is used to support very different approaches to the management of the uplands. On the one hand, conservationists and state regulators have used the language of rigorous science and uncontested certainty to argue that urgent steps are required to protect fragile upland catchments from further degradation. On the other hand, people-oriented proponents of community development have drawn on the language of indigenous knowledge to argue that local residents have the traditional skills to manage this fragile landscape, provided they are shielded from the disruption of both state regulation and commercialization.

This book proposes that this has become an unproductive debate between those who hold that upland residents are “forest destroyers” and those who see them as “forest guardians.” What makes this debate unproductive is that, ultimately, it is based on a shared assumption of upland crisis, born of a series of questionable beliefs about environmental processes in the uplands. The conclusions that emerge from the previous chapters are stark:

┬╖ Popular explanations of upland degradation in northern Thailand are highly simplistic and contested by research both inside and outside Thailand.
┬╖ Land-use policies claiming to address problems such as water shortages, soil erosion, and biodiversity loss may not address their underlying causes, and might even exacerbate problems.
┬╖ Local livelihoods in the uplands are restricted because of a range of official land-use controls that are often based on prejudicial views of upland agriculture and questionable assumptions about its environmental impacts.
┬╖ Alternative solutions favoring local livelihoods have played an important role in countering official prejudice, but they frequently rely too heavily on simplistic representations of traditional upland lifestyles and too readily assume that commercial agriculture results in ecological degradation.
┬╖ Many of the participants in the debate about environmental management in northern Thailand have been aware of research criticizing these positions for years, but have not acknowledged these insights, nor generally changed their approaches accordingly.

If you want to read more (you should!) you can order the book from University of Washinton Press or from Amazon.