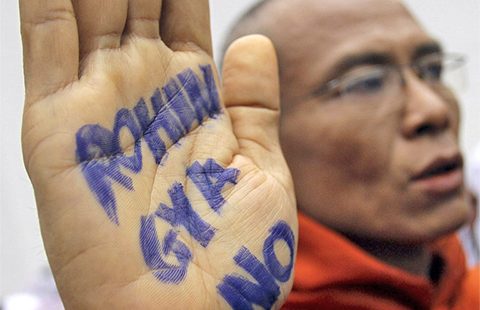 This column was published by The Myanmar Times on Monday, 14 September 2015

As the campaign for power gets serious, the chorus of objections, grievances and gripes gets louder. One of the early flashpoints has been the registration of Muslim candidates.

The Union Solidarity and Development Party and the National League for Democracy have made their positions clear: They do not want to support Muslim candidates under their party banners.Right after the 2010 election, the USDP benefited from its multi-faith representation in Nay Pyi Taw. Since 2012, however, the position of Muslim politicians has deteriorated significantly. The two Muslims elected to the local legislature in Rakhine State have not taken their seats for years.

It has been U Shwe Maung, also known as Abdul Razak, and a small number of other strident voices, that have kept up the campaign for Muslim representation. He was elected in 2010 to the Pyithu Hluttaw’s Buthidaung constituency, in far northern Rakhine State.

That was back when the USDP sought to curry favor among Muslim voters. Their support offered an alternative to Rakhine nationalist dominance.Yet as someone who identifies as Rohingya, U Shwe Maung was always an odd fit with the party of the former military leadership. His outspoken support for unpopular causes made him a figure of controversy in Nay Pyi Taw. His list of enemies grew long.

This time around U Shwe Maung cannot even contest as an independent now that a Union Election Commission ruling has gone against him. His Rakhine Buddhist opponent asked questions about the citizenship of his parents. And that was enough. It is a further ludicrous turn in the disenfranchisement of Myanmar’s Muslims.

How did it come to this?

The message from all of the big political players is simple. The Muslim minority – officially only 4 percent of the population, but estimated by many international groups to be as much as triple that approximation – is not welcome right now in political life. Finding any excuse to exclude loud Muslim voices is one way to keep the Buddhist nationalist heartland on side.Many Myanmar Muslims will likely shrug their shoulders and get back to work.

But for others this is a slap in the face and a further indication that a more inclusive, multi-religious society has been bounced off the agenda.By barring so many Muslim voters and political aspirants, the Union Election Commission, the major political parties, and all those who support this approach, are also quickly delegitimising the entire vote. It is a shortsighted response to what should be only a marginal issue in the election campaign.

If Muslim voters could have their say, as they did in large numbers in November 2010, then I would guess that, at most, a handful of seats would go to Muslim candidates. Instead, the powers-that-be are determined to eliminate even this peripheral Muslim representation.

And while exuberance for excluding Muslims is gaining momentum, it really could have been so different. Initiatives to bring minority religions into the political mainstream are standard practice in Myanmar’s near neighbours.

Take Thailand, for instance. While the country has waged a hard-headed counter-insurgency campaign in its Muslim-majority southern provinces, it continues to welcome Muslim leaders to Buddhist-dominated Bangkok. There are too many to name. Muslim figures play politics at the highest levels. It is sometimes forgotten that during the 2006 coup the commander-in-chief of the Royal Thai Army was a Muslim, Sonthi Boonyaratglin.

Then in Bangladesh – where there is a long history of very difficult inter-religious relations – Buddhist politicians and officials enjoy great prominence. The Bangladeshi ambassador to Myanmar from 2009 to 2014, Anup K Chakma, was a Buddhist and retired army officer, who had held the rank of major general. His tactful role as a broker across the Muslim-Buddhist divide deserves more credit.

Of course, neither Thailand nor Bangladesh is a perfect example of inter-religious harmony, but they show there is no future in barring minority religions from contributing to national life. Indeed, Myanmar has its own local tradition on this score. Muslims and Christians have been in top jobs going right back to the independence struggle.

But today if Muslims are cut out of the formal political equation then Myanmar faces some really serious challenges. The country’s own history has plenty of sad examples of what happens when disenfranchised minorities have their backs against the wall.

Almost everyone involved in Myanmar’s political process deserves blame for this unedifying situation. Often critics are only prepared to target one side or another. In this case it is militarists, democrats, ethno-nationalists and conservatives who must all take responsibility for their decisions.

By ensuring that Muslims feel left out of the historic vote, Myanmar’s power-brokers will condemn their 2015 election to unnecessary international ridicule. It did not need to be this way, but such decisions – the culmination of years of ugly anti-Muslim agitation – do not deserve our respect.

As the election campaign continues, it is this narrow vision of fortress Myanmar – one that deliberately excludes some of its most valuable citizens – that will further aggravate communal tension.

Nicholas Farrelly is the co-founder of New Mandala and a fellow in the Bell School of Asia Pacific Affairs at the Australian National University. He writes a weekly column for The Myanmar Times.