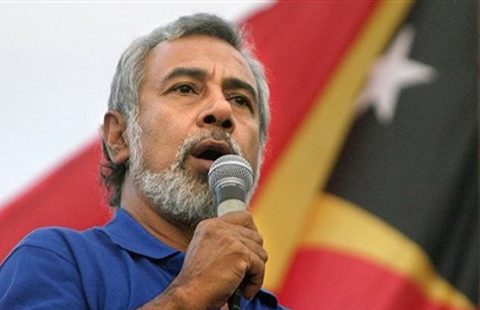 The changing face of Xanana Gusmao Xanana Gusmao was once labelled Southeast Asia’s Nelson Mandela; here was a guerrilla warrior and people’s hero turned politician who would usher in a new democratic dawn.

The words ‘charismatic’ and ‘poet’ were de rigueur in any foreign news coverage of the former leader of Timor-Leste’s armed resistance against Indonesia. When Timor-Leste separated from Indonesia in 1999 and began the transition to independence, Gusmao became the darling of the United Nations, influential donor countries, and international foreign journalists in his role as president and later prime minister.

How quickly times have changed. In recent international media reports, Prime Minister Gusmao has been labelled a ‘despot’, implicated in corruption and nepotism allegations, and been told it is ‘time to go’.

Whatever truth there is to these claims, they point to one remarkably undiscussed issue; the degree to which the Xanana myth was built by the international community itself. Recent coverage of Gusmao also overlooks the fact that local opinion about Timorese leaders was always more nuanced and conflicted than international portrayals made them out to be.

Timor-Leste’s independence, achieved in 2002, coincided with the growing need for a UN success story after a series of failed missions in the 1990s. Immense optimism and big expectations surrounded the transition years, which occurred after more than two decades of Indonesian occupation and centuries of Portuguese colonialism.

International hopes for a democratic success story in Southeast Asia hinged on select political leaders, chief among them Xanana Gusmao and José Ramos-Horta.

For international onlookers, Gusmao and Ramos-Horta embodied the democratic potential of the new nation. Samantha Power’s biography of the late head of the UN transition administration in East Timor, Sergio Vieira de Mello, tells how de Mello and other UN officials believed that the UN’s success depended on building a strong relationship with Gusmao – a bond that continued though much of the UN’s presence in the country.

The optimistic view of the new nation’s possibilities continued up until 2006 when Paul Wolfowitz, then head of the World Bank, named the country a “remarkable” success story, ignoring the looming unrest that would soon culminate in a serious political crisis.

“In a short amount of time,” he said, “the people of [East Timor] have built a functioning economy and a vibrant democracy from the ashes and destruction of 1999.”

Gusmao’s international popularity continued even when high hopes collapsed with the onset of the 2006-2007 political crisis. Originally an army dispute over what was perceived as the unequal distribution of privileges to soldiers from the nation’s western and eastern districts, it soon spread to the civilian population.

Both externally and domestically, the crisis was viewed as a failure of local leadership. Internationally however, this understanding served to escalate external debates about good and bad leaders in Timor-Leste.

In this context, then prime minister Mari Alkatiri was the ‘bad’ leader. Opposing Gusmao’s charisma, Alkatiri was routinely described as arrogant and aloof. According to media articles, he was uncommunicative, ruled his ministry with an iron fist,, he was accused of corruption and an unwillingness to share power. International media reported widely on local critiques of Alkatiri during the crisis, and blamed him for not calling for the aid of Gusmao to solve disputes.

Certainly, Alkatiri’s leadership was alsochallenged at the domestic political level. Yet his FRETILIN party managed to retain a large support base both during and after the crisis. The strongest calls for his overthrow appeared to come from overseas. At the same time, questions circulated locally about Gusmao’s role in the crisis that undermined the powerbase he had held in the eastern part of the country.

In the early independence years Xanana Gusmao commanded full respect from young and old. By the time of the 2006-2007 crisis, this mood had changed significantly. Many felt he had actively contributed to divisions between the country’s western and eastern citizens, and failed to protect the latter from attacks by western gangs that ensued in the wake of the army disputes.

In the last few years, generations of young Timorese have also begun openly questioning the strict, top-down leadership style cultivated by Gusmao as head of the resistance, which undermined the individual decision-making powers of Timorese youth during their involvement in the clandestine independence movement. In addition, there has long been widespread disappointment with the leadership’s failure to pursue justice with Indonesia.

While Alkatiri was scapegoated in international press, hardly any foreign reports relayed growing local critiques of Gusmao. Instead, Gusmao and Ramos-Horta were portrayed as the people most capable of leading the country out of crisis in reports that increasingly pitted the country’s senior leaders against each other.

In 2007, the Foreign Fund for Peace placed Timor-Leste on its failed state index for the first time. Still the FFP remained optimistic as to Timor-Leste’s ability to get through the crisis, citing the election of Gusmao and Horta to the nation’s top jobs. That same year, when Gusmao campaigned for prime minister and Ramos-Horta for the presidency, a UN official described their election as the “only democratic choice” for Timor-Leste.

Ironically, Gusmao’s calls for forgiveness and reconciliation with Indonesia which formed the basis of local critique, only served to strengthen his international glorification. Portrayals such as the documentary A Hero’s Journey and various media portraits cemented his international reputation as a statesman on par with South African leader Nelson Mandela.

When foreign commentators now seek to tear down the myth of Xanana, they overlook the part international journalists, donor countries and UN officials played in its making. International assessments of Timor-Leste and its potential have always changed rapidly; from miracle nation in the making, to failed state, to success story again.

At the centre of these descriptions is a shifting cast of domestic political figures to be scapegoated or credited with democratic success. The new tone in international reporting on the country’s current prime minister mirrors this cycle of reporting.

International media has often simplified East Timor politics into bad/good scenarios. In so doing, it has lagged behind Timorese nuanced and varied understandings of their own country and their leaders.

Maj Nygaard-Christensen recently completed a post-doc project at the Department of Culture and Society, Aarhus University. She is currently an independent researcher and research consultant. Angie Bexley is a Research Associate in Anthropology, School of Culture, History and Language, ANU College of Asia Pacific.