Visiting Baan Tiam in Chiang Mai province last week I noticed that many of the garlic storage sheds were full of dried garlic. I was a little surprised. Since I first visited Baan Tiam in 2002 garlic had declined in popularity. There were three main reasons: a decline in yield thought to be a result of soil nutrient deficiencies; a reduction in price as a result of the agricultural trade agreement with China; and a Thaksin-era scheme to subsidise farmers to shift away from garlic production.

However, over the past couple of years the dry-season cultivation of garlic has experienced something of a resurgence in Baan Tiam. It is certainly not as dominant as it used to be. There are now plenty of other dry season options (including rice, as a noted recently on New Mandala). But it is once again a popular dry-season crop.

In relation to their most recent harvest, most farmers agreed that the yield had been good, perhaps even very good. But the problem was price. The following graph (using data from the Office of Agricultural Economics) tells the story. (Click on the graph for a clearer image.) 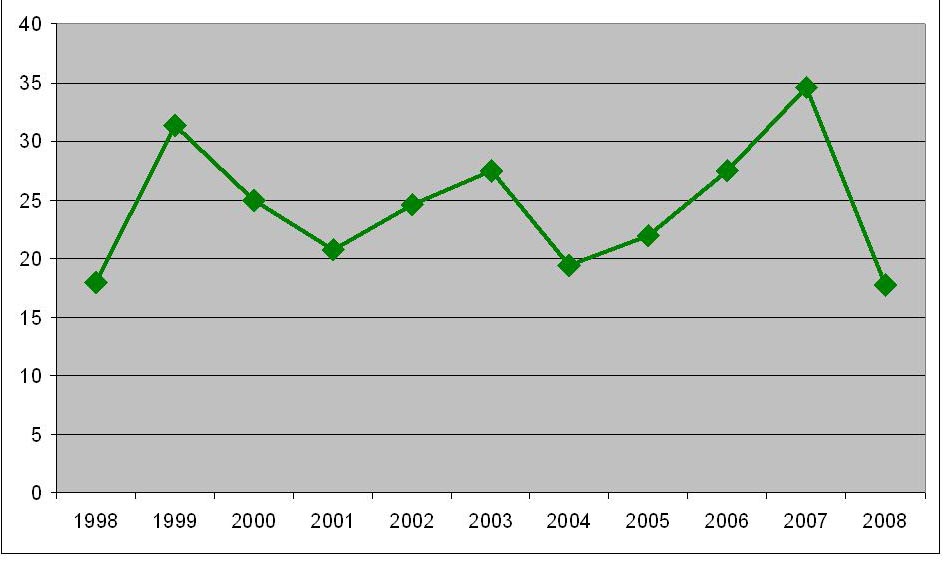 As I have previously noted, garlic prices went down significantly following the agricultural trade agreement with China which came into force in late 2003. But in the following years there was a steady recovery. In 2007 prices were higher than they had been for a very long time. In early 2007 they were even over the 50 baht per kilogram mark. So it is unsurprising that a good number of farmers took up garlic cultivation again, disregarding the promises they had made to shift out of garlic production when they accepted government subsidies to take up new crops.

But agricultural prices are unstable. While the price of rice has boomed the price of garlic has plummeted. So far this year the price has averaged about 17 baht per kilogram. And over the past month or so the trend has been down. Sale of garlic at this price would mean a significant loss for Baan Tiam’s garlic farmers. They say they need at least 25 baht to cover their costs and make a minimal profit. 30 baht would be nice.

I am not sure why the price has dropped. I am not aware of any substantial increase in imports from China. The answer may lie in domestic production. Perhaps in response to the extraordinary prices of early 2007 many farmers decided to take up garlic production again, subverting the government’s previously successful attempts to substantially reduce domestic production. Certainly this appears to have been the case in Baan Tiam.

Ignoring government advice is an honourable part of rural tradition. But in this case it may have been an expensive mistake.