Tacloban City’s 'Home of the Happiest People' tourism campaign is a cover up of five years of devastation in a disaster-stricken city.

The Tacloban City Government has launched a marketing campaign branding the city as the “Home of the Happiest People in the World.”

Published at the city government’s Facebook page is a promotional video showcasing Tacloban’s scenic landscapes, posh hotels and smiling people. Set to inspirational and upbeat music, the 6-minute video follows Tacloban Mayor Cristina Gonzalez Romualdez as she delivers short catchphrases for why you should visit the city.

“You’ll like the sceneries. You’ll love the gentle smiles,” she says, as the camera zooms to cheerful locals.

This campaign is tone deaf and cringeworthy. Absent from the video is the story of a city that suffered from Typhoon Yolanda (international name: Haiyan) in 2013, that claimed the lives of over 6,000 people and displaced over four million inhabitants. Many are still suffering today.

We find this campaign as a case of “happy-washing.”

Just like green-washing which puts a spin on a company’s environmental track record, happy-washing obscures desperate realities on the ground. This strategy, we argue, is problematic for three reasons: 1) it erases and re-writes Tacloban’s collective narrative of resilience and survival; 2) it dilutes the fierce Waray identity, and most importantly, 3) it silences the survivors who were pushed out into resettlement sites and covers up their enduring needs.

Released in early April 2018, the branding video has garnered over 700,000 views on Facebook, 21,000 shares and approximately 1,000 comments. The comments often praise the Mayor and commend their successful recovery from Typhoon Yolanda. “Nice to see how Tacloban has renewed its spirit after Yolanda,” said one user. “Like a phoenix that rose from its ashes, I see that Tacloban City has now risen and the people are even stronger and happier,” said another.

But not everyone is stronger and happier after Yolanda. As geographer Chaya Go explains, people may be strong and happy but they may also be tired, angry and fearful. People are rarely defined by a sole characteristic. To define Taclobanons as “the happiest people” is reductionist and perpetuates unrealistic expectations from outsiders as well as locals themselves.

In a scathing viral takedown of the branding, Krizette Laureta Chu, a Tacloban local with large social media following, points out:

Just because people survived Yolanda and were tough enough to move on, doesn’t necessarily mean they’re a happy bunch. It’s not true … Being resilient does not mean people are happy.

In our research, we find that behind the smiles are less camera-worthy stories of recovery. The much-celebrated virtue of “resilience” comes from painful coping strategies involving high-interest debt, skipping meals and living in substandard rebuilt shelters with no basic services.

In a society known for low trust among strangers and limited state support, the urban poor of Tacloban have adapted by being extremely self-reliant. Intense self-reliance is a form of individual resilience borne out of necessity. It is not the same as the positive community resilience that is implied in the humanitarian and development mantras of “building back better” or “bouncing forward”.

Just because the survivors may be individually resilient or “tough enough to move on”, does not mean that this resilience was a positive outcome of their community or their government policies. Nor is “being resilient” the sole responsibility of survivors. Focusing on the resilience of the people masks the need for the whole system to be resilient and particularly the need for the government to implement policies and invest in infrastructure that can prepare the city for future mega-disasters.

This is not the first case of happy-washing in disaster-stricken Tacloban. A few days after Yolanda, a Belgian volunteer made a video of survivors dancing among rubble to Pharrell Williams’ Happy. Following the song’s lyrics the message is as simple as it is problematic—happiness is a choice. Performing happiness, it seems, is the secret sauce for successful post-disaster recovery. The background of destruction was not the problem, it was the inhabitants that chose not to dance to Pharrell.

In the comments under Krizette Laureta Chu’s viral post, an interesting discussion unfolded about how “happy” is contradictory to the typical characteristics of the local people, the Waraywaray.

Warays are known to be feisty and strong. The Warays commonly described as, “An mga Waraynon, mag-isog” or literally translated as, “The Warays are brave.” In Chaya Go’s thesis “Women of Storm Surges” she finds that :

The repetition of the word “waray,” which literally means “nothing,” seems to double emphasize the people’s extreme ability to persist until absolutely nothing remains.

Therefore, as some on Facebook have noted, “happy” does not do the Waray identity justice and such a depiction “reduces the complex wonder of Warays into something as cliché as happy”.

But it’s also important to note that just as not all Taclobanons are happy, not all Waray are brave. However, there is the risk that by replacing “fierce” and “brave” with “happy”, the new branding is diluting, or worst, erasing, the cultural identity of the Waray.

Silencing the Needs of Survivors in Resettlement Sites

One of the most cringe worthy shots in the whole video for anyone familiar with the recovery process after Yolanda, is the scenes featuring the Anibong Memorial Shipwreck. Photo of the concrete house that was destroyed when the M/V Eva Jocelyn ran aground. Photo: Yvonne Su

Anibong was one of the most damaged barangays (village) because many large cargo ships ran aground killing many residents. The ship at the memorial site, M/V Eva Jocelyn, crashed into a concrete home during the typhoon, killing the family and those who evacuated there for safety. The memorial is an actual as well as symbolic site of tragedy.

Yet in the branding video, the memorial site is treated like a fun, tourist “destination.” Missing in the imagery are the families that have been forcibly displaced to resettlement sites north of the city.

On a recent visit to the GMA Kapuso Villages, a resettlement site in Tacloban North, we found that there are still major needs in terms of livelihoods, water, waste disposal and health services that have not been addressed by the government. The sources of livelihood that can be found around the resettlement areas are sparse and pay very little. As one survivor noted, “Apinas la tam kita yana makakaon hin 3 kabeses hit us aka adlaw” (Our income now could barely buy food for three meals). Access to water remains an urgent issue, as the homes still do not have piped water. Families must line up to fill up buckets of water from delivery trucks. Lack of proper waste management have resulted in people becoming sick from the smell of garbage and lack of health services has meant they cannot get treated.

All of these issues combined, have recently mounted to serious consequences as a survivor told us “May namatay na pagbasura kay waray man ginkakaon (Somebody died already by scavenging because that woman and her family have no income). Given the significant needs that still remain, money should be invested in these key areas to ensure basic needs are met. All this to say, families in resettlement areas need assistance, not advertising. Survivors living in the resettlement sites in Tacloban North wait in line to fill up their containers with water from the government’s delivery trucks. (Photo: Ladylyn Mangada)

Branding is Hurtful to Survivors

Beyond being unhelpful, the branding is hurtful because it forces people to toe the line, or remain silent, if they want to be in the good favour of politicians and local elites.

In reaction to Krizette Laureta Chu’s negative post, a city official made a comment saying “Nobody really cares if you’re miserable, so you might as well be happy….”

Such discursive coercion leaves the survivors with little recourse. How does one effectively complain about their lack of basic needs without sounding miserable? Can the city offer advice on how one can master complaining with a smile? 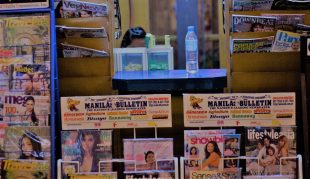 In addition to covering up the many issues that persist after Yolanda, the “Happy” branding masks the resentment over the unequal distribution of humanitarian assistance and the very slow pace of the government relief and recovery effort.

Shown in the video are the select few who are living life comfortably, rather than the large population of the city that continues to struggle every day to make ends meet. And yet, most of the “new” Tacloban, including the lavish hotels, the hip cafes, the memorial/tourist sites that are enjoyed by the comfortable few—was all made possible due to the humanitarian assistance and international and regional investments that poured in after the death of “old” Tacloban during Yolanda.

Our hope is for the city to build its reputation on actually helping those who have been affected the most by Yolanda, and for actions to speak louder than words—or in this case—a “happy-wash” marketing campaign. Survivors will have a chance to be genuinely happy when their livelihoods are restored and they do not need to resort to negative coping strategies to survive. 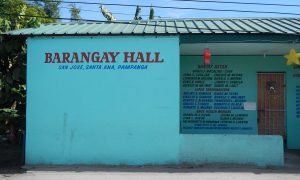 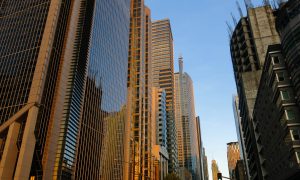 A common logic—play nice with Beijing, get investment—doesn't fit the facts in the Philippines.