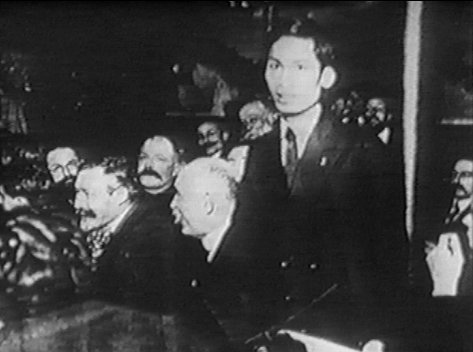 July’s Journal of Vietnamese Studies carries a remarkable document: a previously unpublished letter written by Hс╗У Ch├н Minh, dated September 8th 1921. It is one of the earliest private, political sources from the Vietnamese revolutionary’s life found to date.

Pascal Bourdeaux, an associate professor at the ├Йcole Pratique des Hautes ├Йtudes in Paris, came across the letter ending with “a flowing, elegant, lightly italicized and underlined signature in black ink” while sifting through the archives of the Paris Evangelical Missionary Society. The name signed was “Nguy├кn Ai qu├вc” – more usually spelled Nguyс╗Еn ├Бi Quс╗Сc – or “Nguyс╗Еn The Patriot,” as Hс╗У Ch├н Minh called himself at the time.

Dating from the politically formative, but sparsely documented, years of Hс╗У’s residence in Paris, the very existence of the letter is of great biographical significance. Besides a handful of police reports and newspaper articles, what we know of this period of Hс╗У’s life stems predominantly from retrospective accounts – many autobiographical – and so the unearthing of this more personal primary source is rare, if not unprecedented. Yet it is the content of the document, particularly the sophistication of Hс╗У’s argument, which will make it so fascinating to Hс╗У scholars.

The typed letter, written to French pastor Ulysse Soulier, demonstrates the future North Vietnamese President’s surprising support for the protestant missionary project in his home country, but at the same time articulates his burgeoning nationalist views; further evidence that this early 1920s period was pivotal in the gestation of Hс╗У’s anti-colonial consciousness. At the time of the letter’s writing in 1921, he had already advocated the interests of Indochina to the American President, Woodrow Wilson, at the Versailles conference in 1919, and had been a founding member of the French Communist Party in 1920. However, the more militant stance of the man who was to be the Comintern’s foremost colonial warfare theorist seems yet to have been fully adopted; the letter makes no explicit reference to formal Marxist-Leninist doctrine, and it refers to the inhabitants of Indochina as the “Annamese” – soon to be regarded as an offensive term by the nascent Vietnamese nationalists. Not least, his conciliatory attitude towards the spreading of religion by European missionaries suggests that “Uncle Hс╗У” the revolutionary was not yet a fully-formed persona.

Responding to his correspondent’s plans for an evangelical project in Indochina, Hс╗У describes Pastor Soulier’s aims as “extremely laudable,” going so far as to assure the missionary that he hopes “with all my heart that you will succeed in rapidly spreading the reformed religion in my country.”

These may seem like startling words from a future Communist leader and figurehead of the nationalist uprising, but Hс╗У’s position in the letter is far from that of an orthodox Christian. He expresses no direct value-judgement of Protestantism and does not engage in any theological discussion of the reformed faith’s specific merits or deviations from either Catholicism or any other religion. Instead, he praises the universal humanism of various thought systems which articulate the “one Truth,” stating in the form of an equation that: “Buddhism + Confucianism + Christianity = Goodness.”

However, this interfaith pluralism, while perhaps striking to the modern reader, is not the primary focus of the letter. Its driving motivation is more socialist than religious, and the population to be evangelised is of more concern to the author than the evangelising process itself. Referring to various points in Pastor Soulier’s mission portfolio that “seem to go against the fundamental idea of [Soulier’s] work”, Hс╗У’s anti-imperialism is clear and forceful, adopting the language of protestant rationality and appealing directly to the pastor on his own terms. Declaring Soulier’s use of the term “French Indochina” to be “utterly contrary” to the evangelising mission, he argues that that “like all things ideal” religion should be borderless and “above any nationalism and any political interests,” and so urges Soulier to adopt the adjective-free form “Indochina” instead. Christ’s work, he agrees, is an endeavour of emancipation, whereas colonialism “is a work of oppression and subjugation.” He thus identifies a total contradiction between colonialism and missionary work, making decolonization a precondition for spiritual reform as, under his logic, “a controlled Indochina cannot be a truly Christian Indochina.”

Further interweaving his anti-imperialist agenda into his critique of Soulier’s strategy, he agrees with the protestant assertion than the Vietnamese are suffering from spiritual and moral oppression, but expands this to include material, social and political deprivation. He stresses that, as a result, the Christian mission cannot properly achieve its goals without addressing the social and political problems wrought by colonialism: “moral benefits and material benefits have to go hand in hand, for the one cannot be accomplished without the other.”

He thus undermines the colonial missionary project on its own terms; to turn an Indochinese person into a good Christian is not – and cannot be – the same thing as to turn him into a good Frenchman, and therefore evangelism cannot be a tool of colonialism. “Isn’t the free man the only man recognised by God?” he asks.

Altogether, the letter is an intriguing insight into the operations of Hс╗У Ch├н Minh the wily, diplomatic patriot, as he made connections and advocated the burgeoning nationalist movement’s cause in the very centre of the colonial metropolis. Bourdeaux, in his commentarial notes published alongside the letter, writes that the document is evidence adding to the impression that liberal Protestantism was a movement which Hс╗У was especially close to during his early efforts to gain support for his anti-colonial cause; he is known to have had contact with Chinese and Korean protestant nationalists around this time, and many of the European human rights advocates he worked with would have been members of reformist Christian churches.

Bourdeaux demonstrates that “the document is incontestably authentic, and […] should without a doubt be attributed to the future Hс╗У Ch├н Minh.” Even the apparent misspelling of the author’s name only heightens the letter’s significance; “Nguy├кn Ai qu├вc,” Bourdeaux points out, is the informal diminutive of Nguyс╗Еn ├Бi Quс╗Сc native to Hс╗У’s home region Nghс╗З An, and the use of this colloquial version indexes the familiarity and trust between the correspondents, as well as the certitude that the letter is a personal, solo correspondence rather than collaborative spokesman-piece on behalf of a party or collective.

The unexpected publication of the letter, alongside Bourdeaux’s well-researched companion piece supplying exhaustive information on the background of Hс╗У’s correspondents and the international links between “dissident evangelists”, will no doubt be an exciting development for Vietnam scholars. This uniquely private document complicates our picture of ‘The Patriot’ of the 1920s undergoing rapid radicalization and militarization. It exhibits a more nuanced picture of a skilled diplomat adept at appealing to different actors on their own terms. Surprisingly willing to engage with the enculturating projects of religious figures from Europe, and yet resolutely patriotic and politically focused at this transformative stage of his career, the letter captures a young Hс╗У on the brink of ideological actualization. As Bourdeaux concludes, “[Hс╗У Ch├н Minh’s] inner vocations had already been affirmed. They would now require confirmation.”

*Pascal Bourdeaux and Kareem James Abu-Zeid, ‘Notes on an Unpublished Letter by Hс╗У Ch├н Minh to a French Pastor (September 8, 1921) or the Art of Dissenting Evangelization,’ Journal of Vietnamese Studies, Vol. 7, No. 2 (Summer 2012), pp. 8-28

Matthew is a postgraduate student of the School of Oriental and African Studies, University of London. He holds a degree in Literature from Oxford University and has worked in the media, sports administration, community work, research, and education in the UK and Vietnam.