Thai artist Manit Sriwanichpoom has, since 1997, used his “Pink Man” to demonstrate his distaste for elements of modern life. According to his introduction to this series of critical pieces, “Pink…is considered generally by high class group of Thai people as tastelessness and vulgarity which is used commonly by night-life girls and comedians”.

In 2001, having taken Pink Man around Bangkok, across the Thai countryside, and even to Europe, he deployed him to a time of (historical) horror. Explaining his art, Manit wrote:

How shocking when, last year, more than a million voters elected Samak Sundaravej their new governor of Bangkok. I was flabbergasted. Was not this the same Samak who back in October 1976 went on radio to urge that brute force be used against pro-democracy protesters, in the events that culminated in the most horrifying massacre in Bangkok history?

I asked myself: Has everyone forgotten? Does ‘October 6’ mean nothing to us now? Do we even care? Have we learned nothing from history? Because of this, I don’t think it would be too much for me to hold that ‘Pink Man’ stands for present day Thailand. While out shopping, the man in the obscene pink satin suit with a matching obscene pink shopping cart – a soulless man without a conscience to trouble him – amuses himself by joining the ogling crowd in news photographs of unimaginable cruelty from the May Massacre and events of 14 and 6 October. My, he’s really getting his rocks off. How he enjoys himself. 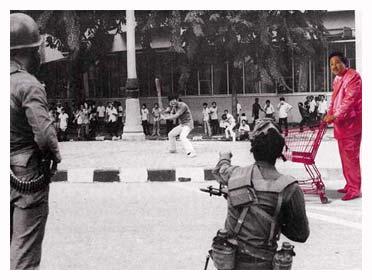 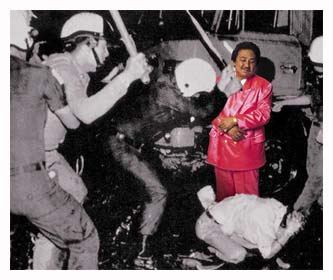 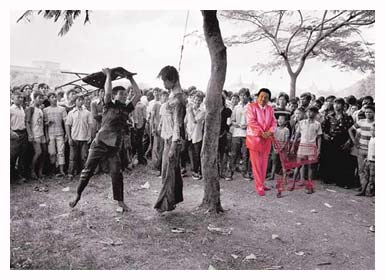 More images from the Pink Man series are available here. Thanks to long-time New Mandala reader Paul for bringing Pink Man to our attention.