Is the MD3 bill a sign of the parliament to come?

Many things have changed in Indonesian politics in the last few months. One of them is negative: the introduction of a new style of campaign dirty tricks imported from the US and used by Prabowo to almost successfully defeat an apparently unbeatable candidate. Another one was encouraging or even inspiring: the popular mobilisations to prevent the election being stolen by a creature of the old regime, actions making use of new media such as the Kawal Pemilu website and well-established techniques such as door-knocking.

But something else happened that showed the limitations of change and how the old politics of back-room deals is alive and well in Indonesian politics. This was the surreptitious amendments to the law on legislative bodies (known by its abbreviation MD3), quietly passed by an alliance of parties in the DPR while everyone else was following the drama of the Jokowi-Prabowo contest.

Both the changes to the law themselves and the way they were engineered are signals of the dangers of backsliding ever present in Indonesia’s democracy. Elements of the political elite are constantly on the look-out for ways to overturn measures that increase accountability and transparency in politics. And unlike the exposure of Prabowo’s shenanigans, in this case hardly anyone has noticed.

The law is a very technical one and regulates the composition, structure and procedures of Indonesia’s national and regional legislatures. But put in simple terms, there are five contentious amendments.

The first amendment received some media attention because of its obvious effects. It changed the way the Speaker of the DPR is elected. Previously, the law said the Speaker would be from the party with the largest number of DPR seats and the four Deputy Speakers would come from the next four biggest parties. Just as Agung Laksono was Speaker when Golkar has the most seats in 2004 and Marzuki Alie took the chair when Democrat was the largest caucus in 2009, so it was expected that PDIP would take the Speakership this time because the party won the most seats. PDIP is expected to nominate Puan Maharani for the position.

But according to the amended law, the Speaker and Deputy Speakers will now be elected as one package (satu paket) by the members of the DPR and finalised in a plenary session. The very likely result is that, with only about 20 percent of the seats, PDIP will not be able to appoint the Speaker and will probably have to be satisfied with one of the Deputy Speaker positions. Most commentary has seen this as a strategy by the pro-Prabowo parties to install a supportive Speaker for a Prabowo administration. Or, in the event of a Jokowi victory, to best position the “opposition” parties and maximise their strength against the new administration. Will Megawati’s daughter Puan Maharani miss out on her promised position as speaker? And if so, where will the Jokowi-JK administration put her?

The other well-reported change was to the provision covering the investigation of legislators for alleged criminal acts, including (you guessed it) for corruption. The new law says that such investigations can only proceed if there is agreement from the President, while the old law provided for a thirty day limit to the President’s intervention, after which investigations could go ahead automatically. This has been widely interpreted as a move to protect offending legislators and politicise the legal process.

Another amendment eliminates any measures to increase women’s leadership role in DPR. Previously there had been a rather weak provision that the representation women in leadership positions such as committee Chairs should be “given consideration” (mempertimbangkan), but even this has now been eliminated. The new law does not even mention the word woman (perempuan).

Two further highly questionable alterations to the law have received surprisingly little mention in the media and popular discourse. The first seems to be a return by the back door of a previous attempt by Golkar to give DPR/D members slush funds (dana aspirasi) from the public purse to spend on projects in their electoral districts. Funds of this kind in other countries, for example in Papua New Guinea, are nothing more than buckets of cash for politicians to use to buy favours. The idea had been howled down by the force of public opinion when it was first suggested in 2012.

Now it has been re-introduced in a slightly watered-down version which says that each DPR/D member would have the right to make suggestions to the relevant government ministries that they provide funds for particular projects in his/her electoral district. The details of how this would work has not been explained, but it has been seen by media and NGO critics as an obvious attempt to give personal discretion over the use of public funds to individual politicians. This is, at best, legitimised pork-barrelling, at worst it is money politics paid for by taxpayers.

The other amendment maybe escaped attention because it seemed too technical and boring for journalists and the blogosphere. But it is critically important because it relates to a measure that was helping control the misuse and wastage of public funds by politicians and officials.

This is the fact that the new law conspicuously neglects to mention the Public Accounts Committee (BAKN) in its list of internal legislative bodies. This committee had been a significant innovation in the old MD3 and was set up in 2009.

BAKN was modelled on a committee common in Westminster parliaments: its role is to systematically scrutinise the expenditure of public funds in government programs in cooperation with the Supreme Audit Agency (BPK).

In a quiet but potentially powerful way, this small committee, composed of mainly sincere and committed legislators, was threatening to throw politically damaging light on nefarious and wasteful activities by officials and MPs. At the stroke of a pen, that annoying little watch dog has now been done away with. An NGO in Grobogan protests the return of “aspirational funds”. They argue that the money will be used to pay off voters who returned the incumbent. Photo credit: TribunJateng.com

Apart from the content of the amendments, the way the changes happened is typical of the kind of decision-making practices that routinely occur in the DPR. It is symptomatic of the inherent weakness of current DPR procedures.

As Parts I and II of this discussion on the DPR have shown, so-called consensus decision-making (mufakat) is a way of keeping key decisions behind closed doors. It provides the leaders of each party caucus with a veto that they will surrender only at cost. The failure to achieve consensus is seen as just that – a failure. In such circumstances, the leaders are forced to come out into an open meeting and take a decision by majority vote (the English word “voting” is often used).

This is precisely what occurred on 8 July. The MD3 amendments were pushed to a vote in a plenary session because consensus could not be reached where it is expected to occur – during the committee stage.

MD3 had been under discussion for over two years, with very little progress. But as the election approached there was a flurry of activity in the committee responsible for the bill.

According to PDIP members of the committee, the parties backing Prabowo (Democrat, Golkar, Gerindra, PKS, PAN and PPP) suddenly started to focus on the clauses on the appointment of the Speaker and began pushing for the bill to be completed. The parties behind the Jokowi candidacy – PDIP, PKB and Hanura – would not agree to the amendments (especially regarding the Speaker) and used their veto to refuse a consensus decision.

Normally this outcome would have caused further postponement of a decision (possibly for months), the kind of delay for which the DPR has become notorious. The parties would deliberate and negotiate outside the DPR until it appeared they had a deal agreeable to all parties to take back to the formal process. In this case, however, apparently under pressure from the leaders of the pro-Prabowo parties’ organisational wings, the DPR’s Steering Committee (Bamus) that oversees DPR proceedings, ordered that the amendments had to go to a vote in a plenary session.

A plenary vote would clearly go in favour of the pro-Prabowo parties because they formed a majority and could push the changes through. In the event, a real vote did not actually happen because PDIP, PKB and Hanura staged a walk-out, leaving the pro-amendment camp to pass the amendments alone.

Therefore, on the day before the presidential contest on 9 July, when every media outlet, NGO and political observer was transfixed by the election, the amendments became law. 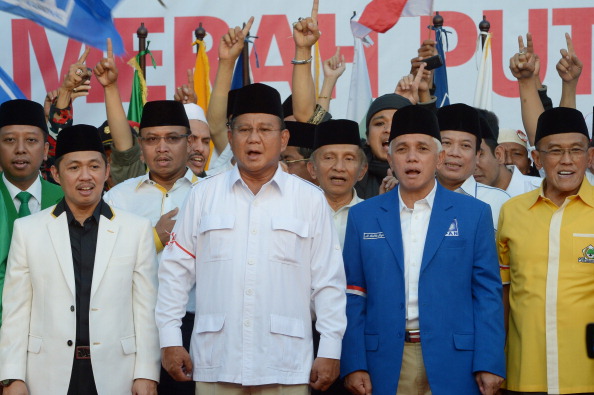 These amendments to MD3 are a rather strange grab bag of different types of changes to DPR procedures. But they are all designed to meet short-term political objectives and to roll back progress in reform, particularly in relation to the control of arbitrary and unaccountable power. They read like a shopping list of issues that had rankled with certain individuals and groups within the DPR who saw the review of the law as an opportunity to get rid of some checks and balances.

The main pressure to get the law through the DPR quickly and quietly was the pro-Prabowo parties’ combined objective of keeping PDIP out of the Speakership when the new parliament is inaugurated in October.

In the absence of further research we can only speculate, but it is possible that the other measures were trade-offs designed to buy general support for the main change across other parties, including those within the Jokowi camp. In the event, this could not happen because the issue had to be pushed to a vote in order to keep to the deadline of a decision under cover of the election hubbub.

We can also only wonder that maybe the decision by PDIP, PKB and Hanura to walk out was designed to cover up the reality that some of their members might have voted in favour of the changes to give themselves more funds, to take away scrutiny and help avoid KPK investigations.

Some commentary has suggested that this was the work of Prabowo’s so-called “permanent coalition” and that it means Jokowi’s government will face continuing DPR obstruction to his future programs.

This is a misreading of how the DPR works: as I argued earlier, because party discipline is so weak when it comes to policy issues, caucus leaders often have a lot of trouble making their members follow the party line in the rare occasions when decisions come to a vote. Not to mention that the “permanent coalition” will only last for as long as the temporary interests of the parties keep it together.

It will be interesting to see, however, whether this episode creates a temptation for Jokowi to repeat SBY’s ill-conceived strategy of trying to buy DPR support by giving out Cabinet seats to every party that puts out its hand.

He has already said that he will not do this, but that was back in early 2014 when PDIP thought it might win a huge swag of DPR seats with Jokowi as its presidential candidate. As this series has shown, PDIP’s glory days of controlling a third of the seats are long gone. The fragmented DPR elected in April this year is going to be an even more messy and uncontrollable institution that it has been in the past.