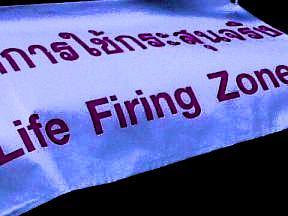 This month, May 2011, saw the release of probably the first independent in depth report on the 2010 red shirt protest and military crackdown in Thailand. That it has taken almost a year is a shame as this has allowed much misinformation to flourish in the meantime.

The report is by Human Rights Watch (HRW) and I should temper my ‘independent’ claim with the reaction of many who think it is far from that. If the test of the report’s independence is that all sides hate it, then it must pass that test with flying colours. The reaction from the Thai government has had Deputy Prime Minister Suthep spitting nails, while on the pro-red shirt side we have seen comments alluding to a lack of partiality by the authors, in particular a strong dislike of ex-PM Thaksin tainting their work. This report can be found here.

Titled Descent into Chaos the report starts with the summary, followed by nine chapters of background, more detailed reporting and recommendations. The final section is an appendix with a timeline of Thai political history from the end of absolute monarchy in 1932 until the election of the first Thaksin Shinawatra government in 2001. The appendix is really a good place to start as it gives a succinct general background of Thai politics for both those new to the subject and those who may have forgotten more than they realise.

In no way could the report seriously be called an apology for the Thai government. We can see this in the five key recommendations to the government at the end of the summary. They are listed below:

There are also three key recommendations for those groups outside of the government which includes both the UDD and the PAD. It would be quite hard to prove that they are not rather sensible recommendations. Again they are listed below:

To see why the Thai government is angry with the report is quite easy. They are castigated for both the tactics and actions of the army. There is no hiding that at times elements of the army were out of control, and that the use of snipers and ‘free-fire’ zones is not an accepted way of civilized governments handling civilian unrest.

Why the pro-red shirt side is unhappy with the report is more complicated. It would be easy to think they would be delighted in such a castigation of the Abhisit government, but that is not the case. The eleven month gap between the end of the 2010 protest and the report’s release has allowed an alternative history to be written. I think this can be seen most clearly in the Thaksin commissioned Robert Amsterdam report and in the speeches by MP Jataporn.

A few quick comparisons between the HRW and Amsterdam reports can be seen below:

Robert Amsterdam on the 2009 protest

Although the government claimed at the time that the Army had acted in accordance with international standards, and that no one had been killed during the crackdown, witnesses reported that at least six Red Shirts were killed by the Army’s live fire, but their bodies were loaded onto military trucks and quickly carried away, preventing them from being identified. Days later, the bodies of two bound and gagged Red Shirts were fished out of the Chaophraya River, showing evident signs of torture.

(It should be noted that the two bodies fished out of the river were later never really claimed by the UDD. There was a suspicion of gangster related violence.)

On April 13, street battles erupted in Bangkok when UDD protesters, who had been blocking main intersections in Din Daeng district with buses and taxis, attacked approaching soldiers with guns, petrol bombs, slingshots, and other home-made weapons. UDD protesters also threatened to explode trucks carrying liquefied petroleum gas near residential areas and hospitals. Soldiers used teargas and live ammunition to disperse protesters and clear blockades. Some soldiers fired assault weapons at protesters. Clashes erupted across Bangkok the next day, when two neighborhood watch group members were killed in a clash with UDD supporters. At least 123 people were injured, including four soldiers. Thousands of protesters then retreated to their main camp outside the Government House on April 14.

At approximately 19:15, two separate grenades exploded behind the front lines of the Second Cavalry Division on Dinso Road, killing several soldiers. The Second Cavalry Division – which had been firing live rounds above the crowd – immediately lowered their rifles and fired thousands of rounds of live ammunition directly into the unarmed Red Shirt crowd gathered at Democracy Monument. While the source of the grenade fire has never been ascertained, beyond their attribution to “men in black” the government claims to have been affiliated with the Red Shirts, the UDD and others believe that the explosions were likely caused by forces working in concert with the First Region Army, under authorization by General Prayuth, in order to create an excuse for troops to open live fire on the Red Shirt crowd, purportedly in “self defense.”

Olivier Sarbil, a French photojournalist and a former soldier, was behind army lines in Din So Road on April 10 when Black Shirts attacked soldiers with grenades and gunfire:

The army had APCs [armored personnel carriers] in [Din So] street, they had three platoons [of soldiers]. The army was playing some music to try and calm the people down. The Red Shirts were pushing a bit. The army had used teargas but the wind made it go back against them so one platoon fell back [into Din So Street]. Then the soldiers started to shoot in the air, and then they got hit by a grenade. They fell back and had injured [soldiers] with them, so to give cover to their wounded they returned fire. The Black Shirts were ahead of them, attacking. I don’t think the army intended to shoot the Red Shirts, but they had to return fire. The commander [Col. Romklao] was in the front when he was killed–I was too far back to see the Black Shirts, but I could see their fire incoming at us. It only lasted a few minutes, but the soldiers lost all of their armored cars except for one. Then they treated their wounded–they had at least 30 wounded soldiers at the back of the soi [small street]. It all happened very quickly, and I stayed until it cleared up, about 40 minutes. The protesters took some Thai soldiers prisoner and brought them to the stage, there was still some incoming fire and the soldiers returning fire.

The problem for red shirt supporters continues with the report’s description of the final hours of the 2010 protest. There had been some of the UDD leaders like Jataporn making up alternative stories of who damaged and burned what, such as the Central World mall. The report gives them very little comfort putting the blame back on red shirt supporters. I think in many ways their biggest problem is that it pulls no punches regarding the character of Thaksin Shinawatra.

The above problem was from 2006 going to cause embarrassment for those on the left who went from anti-Thaksin to pro-red shirt. There was always little hope of distancing the movement from Thaksin and his finances so they were left supporting a movement to bring back an extremely authoritarian ex-prime minister with a woeful human rights record. The report lists some of this record as HRW was involved at the time.

It will be interesting to see if the Human Rights Watch report is timely or just a little too late. Thaksin is promising to be back in Thailand in November and among other things, to clear up Thailand’s drug problem in a year. We could see the need of another HRW report then following the extra-judiciary killings that took place last time he tackled this issue.