Human rights, the law and violence in 2010

Thailand’s National Human Rights Commission (NHRC) last week quietly published its report on human rights violations during the political protests and the crackdown of 2010. The NHRC’s report has some serious problems, for which the NHRC should be criticised. In this article I list 8 problems that I regard as the most serious. 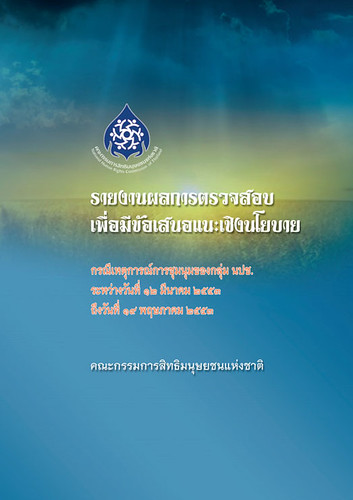 1. The NHRC does not understand the difference between violating human rights and violating the law

In the section about the government’s decision to declare a state of emergency and set up the Center for the Resolution of the Emergency Situation (CRES), the NHRC devotes all the space to giving reasons why the government’s decision was “in accordance with the law and the Constitution”. The NHRC never mentions, for example, the fact that the Emergency Decree allowed authorities to violate human rights without being held legally accountable. Likewise, the whole section on the closure of People’s Channel (PTV) is dedicated to specifying why the closure of PTV was “necessary and appropriate for the circumstance” and “in accordance with the law”. No instance of the word “human rights” occurs in this section.

2. The NHRC does not understand the difference between human rights and other rights

The NHRC’s report shows that the NHRC does not understand that human rights are different from ordinary rights, and that violating human rights is different from causing troubles and inconveniences. The NHRC spends a good portion of the report explaining how the UDD’s protests caused troubles and violated some rights and freedom – such as the right to drive vehicles freely without being blocked by protesters, and the freedom to conduct business without being disturbed by protests – as if these rights were human rights.

For example, on page 30 the NHRC writes: “Some protesters had moved to Ratchaprasong intersection, which is an important business area. The protest aimed to block traffic routes and prevent people from using their vehicles, as the area is an important transport hub in the heart of Bangkok. Also, the protest continued for several days without a scheduled end, which affected important businesses, caused troubles, and prevented people from working and living as they normally do.”

In reality, the freedom to drive vehicles unobstructed and the freedom to work and conduct business undisturbed, though often recognised by the state as legal rights, are not human rights.

The NHRC also writes: “[The protesters’] dumping blood outside the Democrats Party’s headquarters, the Government House, and the Prime Minister’s house, caused troubles for the owners or occupiers of those places, and was a symbol that promoted violence.” (Page 30) In reality, no serious human rights organisation will regard the act of dumping unpleasant substances outside politicians’ houses or offices as human rights violations.

On page 72, the NHRC writes: “The UDD’s demonstration was one that caused confusion and unrest in the land. It involved burning and destroying a large number of private and public properties. So the demonstration violated other people’s property rights, which are protected by Article 41 of the Constitution. It also violated the Criminal Code, which prohibited arson attacks against public or private properties, as well as theft. So the UDD’s actions affected other people’s property rights, and therefore constituted violations of human rights.”

The NHRC does not seem to understand that the freedom to live without “confusion and unrest” is not a human right. Neither is the right not to have one’s properties damaged or destroyed. (Or if we take the latter right to be a human right, then it is, in that case, a very low-priority one – so much so that most human rights activists do not prioritise them.)

But the NHRC seems to take the priorities the other way around. The NHRC’s report takes keen interest in violations against properties (there are 39 instances of the word “properties” in the report), while glossing over cases of killings very quickly. The violence during 13-19 May 2010 accounts for 60% of those killed in the political violence of 2010. But the section on the violence of 13-19 May accounts for only 11 pages out of the report’s 88 pages.

The structure of the report also shows where the NHRC’s priorities lie. The NHRC divides the report into 8 sections. All the events that happened during the 7 days from 13-19 May 2010, which resulted in about 60 civilian deaths, are compressed into one section, while another whole section is devoted to describing how the UDD’s protest had “caused troubles” and “violated the law” even before the government declared a state of emergency on 7 April.

4. The NHRC neglects to mention some serious cases of human rights violations

Not only does the NHRC try to play down human rights violations by the security forces, the NHRC also neglects to mention some cases of serious violations altogether. Interestingly, all these neglected cases involve the deaths of protesters.

The clash on 10 April 2010 left 27 people dead, five of whom were military officers. But the part of the NHRC’s report on this event was almost wholly devoted to discussing the officers’ deaths. The deaths of protesters were mentioned in only one sentence: “The deaths of UDD protesters are already in the judicial process. Therefore, it is not necessary to discuss them here” (Page 48). Interestingly, some other cases which are already in the judicial process but which the victims are security officers, are still discussed in detail by the NHRC. One example is the case of James Singsitthi, who is accused of firing an M79 grenade launcher at Saladaeng.

Similarly, the protest crackdown on 19 May and the prelude to it (during 13-19 May) caused about 60 civilian deaths. But the NHRC only mentioned those deaths very broadly in one sentence: “The events surrounding the UDD’s demonstration during 13-19 May 2010 resulted in 404 people injured and 51 killed”. (These figures are from an old report by Erawan Emergency Center. An updated report by the PIC2010 has identified 59 killed.) The NHRC gives no detail on any of these civilian deaths.

Altogether there are about 80 cases of civilian deaths omitted by the NHRC’s report (about 20 from 10 April, and about 60 during 13-19 May). In addition to this, there are over a thousand injured civilians, who are never mentioned in the NHRC’s report.

5. The NHRC neglects to mention some crucial facts

The NHRC’s report never mentioned that most of the protesters killed during April and May 2013 were killed by a single shot in the head or at one of the crucial points on the upper body. Neither does the NHRC mention that nearly all of the protesters had no weapon in their hands when they died, and none were clad in military-style black clothes (contrary to the CRES’s claim that many of those killed were the militant “men in black”).

The NHRC’s report also omits the facts that the military deployed snipers, and that the military used over 117,000 live bullets, including over 2,500 bullets for sniper rifles. (The numbers here are calculated by subtracting the number of bullets supplied to the security forces before the crackdown by the number of bullets returned after the crackdown.)

These facts have been published by the Truth for Reconciliation Commission Thailand (TRCT) and the People’s Information Center for Victims of April-May 2010 Political Violence (PIC2010), and widely publicised by some media outlets. It is unlikely that the NHRC are unaware of these facts.

6. The NHRC makes arbitrary guesses about the motivations behind acts of human rights violation

The NHRC makes prejudiced, arbitrary guesses about the motivations behind acts of human rights violation. Interestingly, the NHRC seems to be very optimistic when guessing the intentions behind the the security forces’ rights violations, but much less so when it comes to the actions of protesters’ and those associated with them.

For example, when describing the clash on 10 April 2010 between the security forces and protesters, together with the “unidentified armed militants (men in black)”, the NHRC states that the security forces had to shoot at protesters because “military officers […] needed to protect themselves and others from the approaching severe harm, which might cause death or injuries, and could not have used any other means of protection”. (Page 47)

As to the security forces’ shootings that killed over 20 civilians and injured hundreds, the NHRC believes optimistically that the military officers did it “unintentionally out of carelessness and miscalculation” (Page 48). But the optimism suddenly disappears when the NHRC describes the military officers’ deaths. The NHRC states that the deaths were caused by “a deliberate plan to murder the military officers”, and that whoever did it was “guilty of pre-planned killing” (Page 50).

7. The NHRC’s report is littered with misleading half-truths

For example, on page 4 the NHRC writes: “The UDD expanded their protest area from Phan Fa Lilat Bridge on Ratchadamnoen Avenue to Ratchaprasong intersection and the area around it. In addition, the UDD rallied to other parts of Bangkok and the surrounding districts. This caused chaos, escalated the situation, and led to injuries and loss of lives in several events, such as the events around the Democracy Monument and Khok Wua intersection on 10 April 2010, the violence at Saladaeng intersection on Silom Road on 22 April 2010, the violence at the National Memorial on Vibhavadi Rangsit Road on 28 April 2010, and the UDD’s search inside Chulalongkorn hospital on 29 April 2010.” (Note: Despite the NHRC’s claim here, the UDD’s search of Chulalongkorn hospital did not cause any injury or death.)

Here, instead of saying who committed human rights violations, the NHRC says vaguely that “there were human rights violations”, which resulted from “the clash between UDD protesters and security forces”. Readers can be forgiven for having an impression that “the death of one military officer by gun shot” was caused by protesters, since the NHRC’s statement encourages that impression. But the fact is that the one officer killed was Pvt Narongrit Sala, whose death was ruled by the criminal court to have been caused by friendly fire.

Vague and misleading statements like this occur throughout the NHRC’s report, especially when it comes to describing crimes committed by security personnel.

The NHRC consistently uses euphemistic phrases that misrepresent the main themes of events.

The NHRC adopts the CRES’ vocabulary, calling the May crackdown “asking for the area back” and calling the military’s encircling the protesters and advancing on them using live ammunitions before the crackdown, “tightening the grip on the area”. The former phrase is used 8 times in the report, and the latter phrase 9 times. The NHRC never mentions that 41 civilians, including a 12-year-old boy, were killed during the military’s process of “tightening the grip on the area”, and 18 were killed as a result of the military’s “asking for the area back”.

Moreover, the NHRC also invents their own euphemistic phrases. For example, the section on the May crackdown and its prelude during 13-19 May 2010 is called “The riot, the clash, and the vandalism against public and private properties during 13-19 May 2010”. Reading the section title, one can be forgiven for having no idea that the section is about a bloody crackdown which killed about 60 protesters, nearly all of whom were unarmed and killed in single shots aimed at the head and crucial points on the body. While the killing spree is played down, vandalism, which is relatively minor as a form of human rights violation (if it can be called a human rights violation at all), is emphasised. The word “crackdown”, which suggests that one side is more powerful and on the offensive, is omitted. And the word “clash”, which suggests an even-handed fight, is preferred.