Despite the game-changing outcome of the 14th General Election, the spectre of race lingers in Malaysia. Appointing an ethnic Indian and Christian Tommy Thomas as the Attorney General has already attracted some predictable flak. When Hindu Rights Action Force 2.0 (Hindraf 2.0, a Hindraf splinter group) demanded that MARA University of Technology (UiTM) be opened to entry by all races, an online petition was immediately kickstarted and has collected more than 150,000 signatures in the first two days. The new Finance Minister Lim Guan Eng—also Malaysia’s second Chinese finance minister after a 44-year break—was condemned for uploading a Mandarin translation of his statement, even though it was officially and originally released in Malay.

If race remains as a potent category of discrimination, its perpetuation must have an emotional appeal rooted in the realities and assumptions of those who embrace it. However, public intellectuals who wish to do away with racism tend to give a response that is dismissive in nature: sociologist Kua Kia Soong proposes outlawing racism, law lecturer Azmi Sharom considers racists bereft of ideas, Dialog Rakyat committee member and academician Omar Abdul Rahman pushes for a greater collective effort in eradicating racism.

These criticisms refuse to acknowledge the sentimental affect of racism. Key to most racial thinking is the seductive appeal of imagining one’s own race as a living minority in need of some protection. It enables a majority to be convinced of their own vulnerability, and to live as, to borrow from Benedict Anderson, an “imagined” minority. Without a doubt, the most vocal imagined minorities in Malaysia are the ethnic Malay majority, and the Chinese, the largest ethnic minority. They are the two “racialised” ethnic groups who succeed in the enterprise of self-minoritisation.

To be an imagined minority is not only to assume victimhood, but to believe in the appeal that one’s own vulnerability is racially unique and significantly more urgent than that of others. The more vulnerable your “race”, the better your prospects. Unsurprisingly, the most controversial of all race-related debates in Malaysia revolved around the competitive narcissistic posturing of the Malays and Chinese. Actually-existing minorities—such as the Orang Asli, Orang Ulu and Dayak, or Anak Negeri—hardly make the cut.

The Malays and Chinese each have at their own disposal a plethora of rhetoric to foster their brand of imagined minorities. Among this is their special attention directed to tradition and heritage. From national institutions (e.g. Muzium Negara or the Malay Heritage Museum) to privately-funded Chinese cultural institutions (e.g. the Malaysian Chinese Museum or Johor Bahru Chinese Heritage Museum), in museumising what is in dire need of preservation they are able to articulate better their vulnerability.

Each of these museums emphasises narratives of loss and sacrifice, while de-emphasising narratives of elitism and privilege. Whenever narratives of privilege are presented, they are framed as an overdue accomplishment, an exemplary success whose arrival is the fruit of previous sacrifices. Additionally, while anti-colonial struggles are highlighted and detailed, complicity with colonialism is sloppily summarised and omitted.

Beyond infrastructural facilities, another effort in self-minoritisation is to think through racially-oriented solidarity movements and protests. For the Malays, Muslim solidarity movements with the Palestinians, Rohingyas, Pattanis, or Moros, yield a new awareness of being an imagined minority in places beyond Malaysia; for the Chinese, issues pertaining to the dignity of the Chinese language and the official recognition of Chinese independent high schools offer an avenue through which the imagination of being minorities can be constantly reinvigorated.

These movements are valid political expressions. But it remains crucial to question their almost organic proclivity for attracting only a specific ethnic, racial, or religious group. At the outset, their protests appear as reactionary and racially exclusivist, but in fact the principal premise is strikingly similar: a vulnerable minority against a dominant majority, the powerless against the powerful. The very impossibility of imagining cross-ethnic solidarities in these essentially anti-hegemonic movements in Malaysia is, in and of itself, a testament to how one is more appealed to race (or religion) than to the actual oppression at stake.

That these solidarity movements only lend credence to identitarianism should compel us to question the limits of solidarity among Malaysians. Can a Malay who antagonises the Israeli occupation of Palestine stand in solidarity with a Chinese who calls for the abolishment of Bumiputra policies in Malaysia? Can a Chinese who insists on the recognition of Chinese independent high schools stand in solidarity with a Malay who demands for the recognition of the Pattanis in Thailand’s deep south? More provocatively, can a Malay who applauds Indonesia’s assimilationism, which had stigmatised and marginalised the Indonesian Chinese minority, truly empathise with the marginalised Pattanis? Can a Chinese who disregards the implicit Chinese privilege in Singapore genuinely lament the prejudicial effects of Bumiputra privilege in Malaysia?

These hypothetical questions, at a cursory glance, have little to do with race, but they bespeak the exclusionary temperaments of racial thinking.

The affect that these protests reveal, or at any rate create, is more fundamental than what the movements advocate. One finds in these ritualistic public demonstrations the highest realisation of imagined minorities: the subliminal emphasis on racial–religious identity over power inequality helps mould the psychological temperament that one is born into victimhood. They become symbolic tokens for self-minoritisation. Whereas the abovementioned museums exhibit narratives of loss and sacrifice, these protests stage and perform them, in public and in action. Under this operant self-minoritisation, it is not too far-fetched to claim that to become a “Malay-Muslim” or a “Chinese” in Malaysia, is to first learn to become a victim and to think like minorities.

Many who still question why an ethnic Malay majority requires institutional protectionism miss the point. Recall what Arjun Appadurai provocatively identifies as the “anxiety of incompleteness”, whereby postcolonial ethnic majorities are burdened by an unfinished project of obtaining authenticity. Equipped with temperaments of loss, a demographic majority will remain “incomplete”, “inauthentic”, and live as imagined minorities in fear of actually-existing minorities. 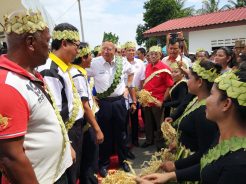 What is lost to the Malays in colonialism is lost to the Chinese in migration. Both imagined minorities seek to rectify their “incompleteness” by pinpointing, even racialising, one another as the dominant “imagined majorities” obstructing their attainment of an originary authenticity.

However unscientific or unfounded these racial categories, the temperaments contained in them are disturbingly honest, intimately personal and subjective. Part of the affect of being “Malay” is to first identify how “Chinese” became the cause of their grievance, vice versa.

Opponents of racism need to understand that proponents of racial politics do believe in race. We need to listen to and explain these affective temperaments rather than dismissing them outright. It is only by first understanding the appeal of race and the complex imagination it summons that one can begin to find ways of uprooting racism.