Indigenous Papuan women and the struggle for land

As a devout Catholic, Valentina Wanopka, an indigenous woman of Wambon Kenemopte tribe from Subur Village, Boven Digoel regency, never passes aday without praying. She believes that it is the strongest weapon she has, particularly in these days of predicament: fighting against the investment plans of the PT. Merauke Rayon Jaya (MRJ). The industrial timber forest company is targeting her adat land. This company is owned by an Indonesian conglomerate and Texmaco group founder, Sinivasan Marimutu, who also had business connections with Soeharto. MRJ is targeting an area of ​​206,800 hectares that stretches from Subur district to Muting District in Merauke regency, the majority of which is owned by the Indigenous Wambon tribe.

Wanopka herself is not an indigenous Wambon woman; she is a Muyu woman who married a Wambon man.  Since her husband passed away a few years ago, she has been in charge of defending her husband’s traditional land to ensure that one day her children can inherit it.  She knows exactly the consequence of her firm stance: that people will surely question it: “You are a woman, you have no right to speak on behalf of this land. Let your eldest son decide it.”  However, she never backs down, she fights for her six children and future generations. She will not allow her children to live without land or forest in the future. She says, “Mama always prays to God; may we win this struggle.”

The inheritance of adat land in the Wambon tribe, as described in 1986 by Jan Boelaars, a Dutch anthropologist, mostly follows a male lineage; the eldest son automatically inherits from the father. Additionally, women are given the right to utilise it for their livelihoods, and sometimes it can be given as a dowry from her husband’s family. However as Boelaars emphasized “Women can’t inherit the land.  At most they just may take some from their mother.”

Wambon people value their adat land as sacred and historical, shaping their indigenous identity. We often hear them say “This land is the land of Mengayu”. Mengayu was a period of war in the past, during which their headhunting ancestors expanded their territory. They believe blood, life and courage has been sacrificed so they can own the land today.

They rely on nature to fulfil and maintain their livelihood. This can be seen through the continuing gender division of labour employed in this community, where adult men hunt and trade, while women deal with food provision by gathering sago and subsistence farming.

In Subur Village, most women keep small farm plots next to their house or in their forest, where they grow bananas, sweet potatoes, cassava, ubi etc. They also gather sago from the forests and swamps. Meanwhile, men are responsible for hunting, making wooden-boats, and fishing.  All of this illustrates the shared interest of both men and women in the natural world of their customary lands. Despite the rule of inheritance, which positions men as holders of land rights, women also have interests in the land.

There is a common and well-known philosophy throughout Papua, which represents the strong bond between women and nature; “Land is Mama”. By extension the forest has a similar role to a mother; caring for, feeding, nurturing and protecting humans. We might suspect that it sounds like a romantic attachment of the stereotype of domestic work to one gender. However, it is reflected in what these Indigenous women, who fight for their land are doing. In a meeting with Boven Digoel’s caretaker regent on October 2020, Valentina Wanopka said:

“Our forest is a big supermarket. Everything we need lies within; food, shelter, traditional medicines, it’s all for free as long as we preserve it. This MRJ investment will only pose a threat to women’s lives. Rivers are polluted, endemic animals are lost, our historical places will be displaced by Industrial Plantation Forests. We, as Indigenous women can no longer weave Eno (fibres of the melinjo tree) because the trees have been cut down. We can’t gather sago and access our medicinal plants. We have been fooled enough by the oil palm plantations that came first. We will not repeat the same mistake by allowing a different company to come into our forests.”

She utilises the philosophical notion of “Land is Mama” as a political tool to express her resistance.  It is a way to manifest the “invisible works” of women. the neglected and ignored understanding that forests, sago swamps and rivers are a vital production space for women, a place where they have the widest access to subsist their live.  Environmental degradation directly oppresses women’s lives. They have no option other than to demand that their right as women, to utilise the land, should be defended and respected.

Wanopka is a part of larger story of Papuan Indigenous women who encounter challenges in the fight for land rights. Rikarda Maa, an indigenous Awyu woman from Ampera Village in Boven Digoel, experienced verbal abuse from those who support the company. “I was threatened by my own family. They said that if the company failed to invest here, it’s because of me.” 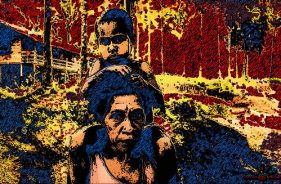 Invisible victims of the Papua conflict: the Nduga Regency refugees


Indo Asiana Lestari, a palm oil company planning to invest in the land of the Awyu people, has obtained the location permit on a 39,190 hectare which was previously controlled by PT. Energy Samudera Kencana, Menara Group. Since 2017, Indo Asiana Lestari has been trying to obtain the consent form Indigenous Awyu in Mandobo and Fofi District, but has always failed. Learning from the experience of the surrounding villages that did not prosper even after accepting the presence of palm oil companies, some refused to consent. In addition, as a forest-dependant community, they worry about the multidimensional impacts of a plantation that will threaten their livelihoods.

The investment plan of PT. Indo Asiana Lestari polarises the Awyu Tribe community. Those for the plantation argue that they need development and jobs opportunities, while those against believe that the forest is more than enough to feed and support their livelihoods, and presume it will only bring more harm than good. One opposition group has organised themselves into a group called The Cinta Tanah Adat (Love Traditional Lands) Paralegal Community. This community was initiated in 2018 by the Awyu Tribes in response to the Indo Asiana Lestari concession, to protect Adat land and environmental sustainability. Their resistance has included participatory mapping, traditional ceremonies, public protests, and writing letters to the government. This resistance was quite capable of holding back the investment plan until November 2020, when the pressure increased. The polarisation and friction between the two groups also worsened.  At its peak, in November 2020, Egidius Suam, an Awyu Tribal leader in the paralegal community, was forced to sign a consent letter by the local police office. Rikardaa Maa, one of the few women in this community who also witnessed the incident, said; “Just after the signature was written in the letter, heavy equipment was transported through Digoel River to the village.  They (the company) seemed so impatient.”

Rika, works as a teacher in a local elementary school. She is also the only woman in the Ampera Village Government, as a member of the Bamuskam (Village Consultative Body). Despite her influential position, she still feels that women have greater challenges in a public space, especially in the decision-making process.

She says “I am the only one woman in this structural position. But I think, it is only to fulfil the quota, in fact I am never involved in some important meetings regarding the village. It seems like I am invisible.”

She also experiences these challenges in her own family and marga (sub-tribe). As the eldest in her family, she has no rights to ownership of adat land. All the decisions regarding the land are the business of her father and younger brother. Luckily, her father also opposes the plantations, at least up to this day. However, some members of the Maa sub-tribe have different positions on the investment. They continue to try to influence her father to reconsider his stance.

Rika has maintained her position even in the face of rejection and verbal threats from her family. They have asked her to stop protesting and overreacting, and claim her activism will prevent the company’s investment from bringing improvement to their lives. Recognising that she could not fight alone in the village, Rika organised a group of women who shared a similar position to her. She collected signatures and wrote a rejection letter to the government. However, the power of capital wins overall.

Amid the chaotic contestation over natural resources in Papua, it is the indigenous women who are constantly pushed out of the arena. Their voices are more often silenced and unheard. The patrilineal lineage of adat land inheritance excludes women from the decision-making. Women are invisible and rarely given adequate space for participation. They are also threatened, belittled and underestimated, if they decide to fight. However, they have important role in preserving the forest and ensuring food and water provision in their family. They need more than just a mic to speak-up, they should be the first to be asked what should happen on adat land. 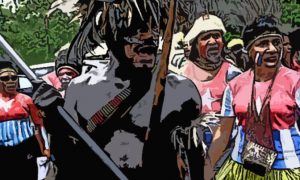 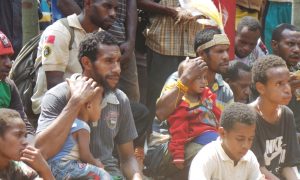 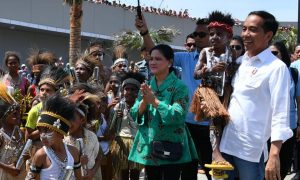