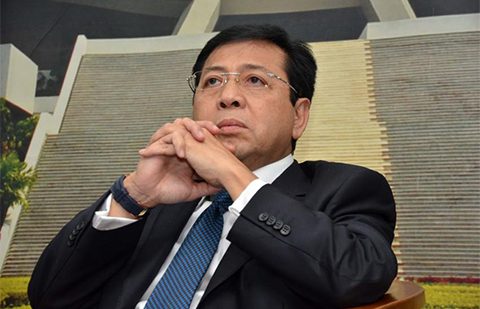 Competing factions of politico-business elites are fighting a war over a lucrative mine contract and President Jokowi is caught in the middle.

The Speaker of the Indonesian parliament, Setya Novanto, stepped down from his post last week.

The powerful Golkar party operator was on trial in the Parliamentary Ethics Committee for allegedly meeting with American copper and gold mining company Freeport McMoran to arrange a private business deal. Setya beat the Committee to the punch, stepping down before it could formally request his resignation.

The scandal is a dramatic twist in what have been long and fraught negotiations between the government and Freeport over the company’s contract extension.

Those within government and parliament who oppose the extension do so on nationalist grounds, arguing that the American miner should no longer exploit and benefit from Indonesia’s natural riches. Those who support an extension argue that neither state owned nor private Indonesian companies have the capital or expertise to run such an operation.

But the Setya affair demonstrates there is another dimension to this conflict. The Freeport contract is the site of a factional war between different politico-business networks, and President Joko ‘Jokowi’ Widodo appears to be caught in the middle.

The scandal
In mid-November, Indonesia’s media erupted over the publication of a transcript of a meeting in which Setya, and shady oil-man, Riza Chalid, met with the President Director of Freeport Indonesia.

In the recording, the pair offers to expedite the company’s contract extension in return for shares in an electrification project that will service the Freeport mine. They named the Coordinating Minister for Politics, Law and Security, Luhut Panjaitan, as a key enabler. Luhut is an old business partner and close confidant of Jokowi.

What made this proposition particularly scandalous was that Setya and Riza presented themselves as gatekeepers of the presidential palace, with special access to and influence over Jokowi. At one point in the transcript, Riza even suggested that President Jokowi would “fall” should he attempt to prevent the contract extension.

The covert recording was made by President Director of Freeport Indonesia, Maroef Syamsuddin, who happens to be former deputy director of the State Intelligence Agency (BIN). Minister for Energy and Mineral Resources, Sudirman Said, went public with the transcript and reported Setya to the Parliamentary Ethics Committee.

The Minister is on the war path, determined to assert control over the contract negotiations and isolate other players like Luhut, Setya and Riza. While Jokowi has often been equivocal in his support for Sudirman Said, Vice President Jusuf Kalla has backed Sudirman from the start, and called for Setya’s resignation.

The controversial contract
The Freeport contract is far more significant than a typical mining contract. The American company has run the most profitable gold and copper mine in the world out of Indonesia’s Papua province since 1967. As it readies for an 18 billion dollar underground expansion of the mine, the company is seeking an early extension of its contract, which expires in 2021.

Negotiations with the government have dragged on for years.

In part, this is because the mining company has a troubled history in Indonesia. Its Grasberg mine is situated in one of Indonesia’s poorest provinces, where a low-level separatist conflict has simmered for decades. Freeport has been accused of human and labour rights abuses, and has a checkered environmental record.

Many Indonesians also feel Freeport has not approached the contract negotiations in good faith. The company has threatened to take Indonesia to international arbitration for not honouring the terms of their original contract.

At the same time, Freeport itself has avoided fulfilling some parts of that contract. For example, the company has only divested 9.36 per cent of its shares, when the contract mandates that 39 per cent should have been divested to local parties by this stage.

For all of these reasons, Freeport is controversial and unpopular with the public.

Media and politicians often frame the contract negotiations as a test of Indonesian sovereignty. So extending the contract is politically sensitive, and the government must be seen to be getting the best possible deal. Freeport’s Grasberg mine in Indonesia Papua.

Brokering a deal
Minister Sudirman Said recently indicated that the government would extend the contract in return for significant concessions from the company – everything from increased royalties and local content to a commitment to building refining facilities.

Sudirman has long argued that Indonesia needs this investment, and that local players have neither the financial capacity nor expertise to take over the mine. The problem is that providing the company an extension now requires changing a government regulation that mandates mining contracts may only be extended two years prior to expiry – in this case 2019.

Some insiders suggest that Said is a “Kalla man”, and that his approach to the Freeport contract is in fact part of a larger plan to facilitate the advance of Kalla’s private interests, including in the businesses that service the Freeport mine.

But such claims remain unsubstantiated, and to most observers Said represents the closest thing to a reformist that the Ministry has seen in years. Even if the Vice President does have his sights set on service contracts, there are many within the Indonesian mining industry and the Ministry for Energy and Mineral Resources (MoEMR) who argue the extension is necessary.

Either way, Said’s position on this matter, and his combative style, brings him into regular conflict with other powerful members of the executive – particularly Luhut Panjaitan, a political ally and business partner of Jokowi.

Luhut makes both a legal and ideological argument against extending the Freeport contract. First, he says, the regulations should not be changed for the benefit of a foreign company. Second, the state should acquire the mine once the contract expires, he argues, and only then invite Freeport to participate in a joint operating agreement with state owned company, Aneka Tambang.

Luhut’s position is a popular one with the public and some members of the executive and parliament. Rizal Ramli, one of Jokowi’s coordinating ministers, makes similar arguments against an early extension of the contract. This approach resonates with the broader, more assertive nationalist mood that has characterised political discourse in recent years, particularly when it comes to resource sectors.

Opportunists like Setya leverage the nationalist mood for their own private benefit. In fact, the transcript makes Luhut’s nationalism appear disingenuous, too. Setya and Riza implicate him in their attempted deal, though Luhut denies any involvement.

Like many within Indonesia’s politico-business class, Luhut has interests in the mining sector. In fact, he’s spoken openly about meeting with Freeport back in 2012 to discuss acquiring company shares. The fallout?
The Indonesian public was understandably incensed by the transcript. A flurry of memes and videos supporting Sudirman and disparaging Setya did the rounds on Twitter and Facebook.

The popular current affairs show, Mata Najwa, dedicated several programs to the case, and attacked Ethics Committee members for their own ethical transgressions. Various petitions circulated via social media, calling for Setya’s resignation; some called for the Ethics Committee and even the entire parliament to be replaced.

The investigation by the Ethics Committee reeked of political manipulation. Golkar quickly stacked the Committee with party members loyal to Setya, and their treatment of Minister Said revealed blatant bias.

Given the hearing’s politicisation, many observers were surprised that the majority found Setya had indeed committed a serious ethical violation. Mounting public pressure probably contributed to Setya’s resignation.

But it appears that Setya loyalists in the Commission were merely pushing for a second hearing, in order to stall a decision. In the end, Setya offered to step down on condition that the case against him is brought to an end, and that he be made Golkar’s caucus chairman.

Not only did Setya escape serious punishment, he was given a strategic role in parliament.

He is a key political broker, skilled at extracting and distributing rent, and is clearly indispensible to Golkar and party chairman Aburizal Bakrie. It was always going to be hard to punish Setya for his transgression.

Luhut and Setya are primarily responsible for organising parliamentary support for the government’s policies and its budget. Opposition parties have been relatively quiescent since Jokowi came to power, and most political analysts put this down to wheeling and dealing – and probably the distribution of largesse – between Luhut, the former House of Representatives speaker and the leaders of opposition parties.

So even though Jokowi was reportedly furious at the content of Setya’s meeting, the President was in a difficult position politically. Striking at Setya might snare Luhut, and could threaten the deal-making that has helped his government to function.

Ideology, rent seeking and foreign capital
Observers frequently scratch their heads, wondering why the Indonesian government appears so bellicose with regard to foreign companies, particularly Freeport, when at the same time government leaders reiterate that the country badly needs investment. The assumption is often that state officials are myopic, na├пve and corrupt in their approach to the business community. But this proposition is unsatisfying.

The reality is that the structure of the Indonesian economy necessitates foreign investment, but structural features of Indonesian politics often inhibit it.

While some within the Ministry of Energy and Mineral Resources and the political elite would prefer to extend the contract (with significant concessions from Freeport of course), they face widespread and assertive nationalist sentiment, and a political system that is built around extraction.

As more and more foreign resource contracts approach expiration, the question of who should control and profit from Indonesia’s resource sectors becomes increasingly contentious. Popular nationalist narratives of indigenous ownership dovetail neatly with the goals of an aggressive politico-business elite that see lucrative resource projects as ripe for the picking.

And politics is expensive.

Jokowi made a strong public statement against Setya’s actions, and made it clear he expected Setya to resign. But Jokowi is a political outsider, and lacks influence in Jakarta’s elite political networks. The President’s weak position means that rent-seeking competition around the Freeport contract is creating deep fissures within the executive.

In the coming weeks, this current scandal will fade from the front pages.

Setya will survive, and Riza will remain abroad for as long as it takes to broker a deal for his protection. Luhut’s relationship with Jokowi will probably weather the recent storm as well. Freeport’s contract negotiations will almost certainly be pushed back to 2019.

But the case remains significant. Setya was forced to resign as Speaker, and politicians may be a little more cautious next time they sit down to extort rents from a foreign company. And Indonesia’s public was able to witness, in fascinating and nauseating detail, the mechanics of rent seeking at the highest level.

Some may begin to interrogate the nationalist pomp of their leaders. Leaving Indonesia’s copper and gold in the hands of an American company might be hard to swallow, but is passing it to the political oligarchs any better?

Gustidha Budiartie is a Jakarta-based journalist. Eve Warburton is a PhD candidate at the Coral Bell School of Asia Pacific Affairs, the Australian National University.