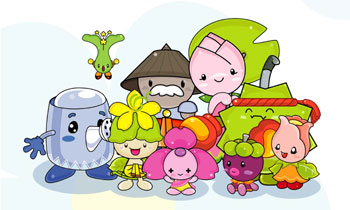 Here are the “nine adorable mascots” that are helping to promote the Royal Flora Ratchaphruek Expo. Today’s Bangkok Post has an extraordinary report about the possible impacts of these naughty little critters. Is this really a good way of promoting sustainable resource management? (I have reproduced the article in full as Bangkok Post articles have a nasty habit of disappearing.)

Farmers asked to cut back on off-season crops 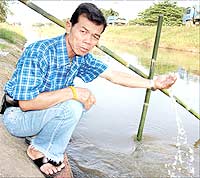 Inthorn Thipkhamma, head of a water users group in Chiang Mai’s Hang Dong district, tests the volume of water in a stream, which may not be adequate for farms in next year’s dry season.

Chiang Mai. The Irrigation Department has asked farmers to cut back on off-season cropping in the forthcoming dry season to ensure water supply for the Royal Flora Ratchaphruek expo. Boonchoo Rinyana, head of a water users group in tambon Khunpong near the expo, said he was stunned to get the request. He said the department wants 70% of farm areas, or up to 700 rai, to be free of off-season cropping. The department did not make it clear why the farmers have to reduce their crop areas, simply saying water would become scarce, said Mr Boonchoo. He said he was distressed. Farmers need to plant off-season crops or they would have no money to pay off debts, he said.”We have a lot of water this season so where will the water go?” said Mr Boonchoo.

Villagers in the districts of San Pa Tong as well as Hang Dong where the expo site is located said they suspect mega-projects including the flora expo have sucked up their water. The villagers have grown rice alternating with seasonal crops such as soybeans and longan [New Mandala: longan a seasonal crop??], and have for 30 years taken water from the irrigation canal running through their villages, from Mae Tang district, 70 km further north. They also use water from Huay Mae Ta Chang stream, which has dried up in recent years because of higher water demand. Water from the stream is also diverted to the 470-rai flora expo through an irrigation station near the project site, the villagers said.

Inthorn Thipkhamma, head of a water users group of tambon Ban Wan, 2km from the site, said farmers living further down have been concerned about a water shortage in the coming dry season. The farmers experienced a shortage in the early and mid-1990s. They managed to settle their arguments, sometimes by resorting to mob rule, he said. But Mr Inthorn said the government is now a new stakeholder in water sharing, and much harder to deal with than other water users.

“When they want water, they just take it,” he said.

If authorities fail to treat them fairly, the farmers may again apply mob rule, he said. Cabinet approved the Royal Flora Ratchaphruek expo in mid-2003 with a budget of about two billion baht, which eventually increased to nearly three billion baht. It was planned for 470 rai of the farm research area of the Department of Agriculture in Hang Dong’s tambon Mae Hia. At a meeting of officials in late 2003, the inadequacy of water in the irrigation canal was raised, and construction of a dam on Huay Mae Hia stream was proposed. Uthai Noppakoonwong, manager of the expo, and director of the Chiang Mai Royal Agricultural Research Centre, said the expo would take some water from the irrigation canal when water from two adjacent reservoirs was not enough. He said officials previously planned to construct a dam on Huay Mae Hia stream to restore water for use, but the nearby Chiang Mai Night Safari Zoo had already taken its water. So the irrigation officials improved the centre’s pond, which was capable of storing about 50,000 cu m of water, while developing a new one next to it. They also created three other water retention ponds on the site to help keep water. Altogether, these reservoirs could hold about 410,000 cu m of water.

“We should have enough water for use, but if not, we will take it when the villagers do not. By this means, we should not disturb the farmers’ cropping,” said Mr Uthai.

A landscape designer for the project said the reservoirs were designed to ensure adequate water supply through efficient management.