Intelligence operations against the Red Shirts 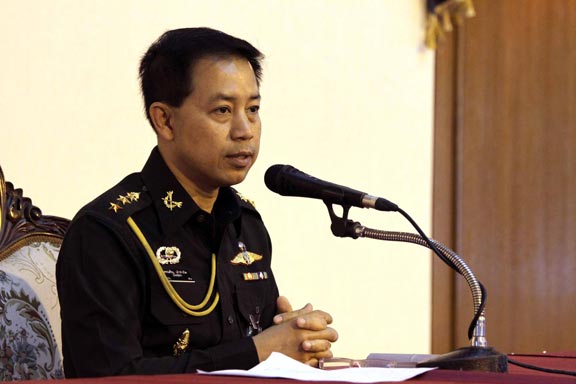 [This is a follow-on from an earlier New Mandala post about military operations in Bangkok in April-May 2010.]

Another article published in Senathipat in the first quarter of 2011 entitled “Lessons learned from Intelligence Operation: A Case of Intelligence Operation in an Urban Area (March-May 2010)” (Vol.60, No.1, pp.69-81), demonstrates techniques employed by the military to persuade people to believe in the government’s position during the political unrest in Bangkok during March-May 2010. It is written by Colonel Boonrod Srisombat at the Army Training Command. Interestingly, his bio at the end of the article is identical to that of “Chief Khuang”, the author of the other controversial article on “Lessons from the Operation Encirclement at the Ratchprasong Area During 14-19 May 2010”!

The author describes how military intelligence operations (IO) were used to tackle the Red Shirt demonstration. IO involved the manipulation of information in order to increase the positive image of the government, hence justifying its decision-making and action. At the same time, it aimed to discredit the Red Shirt, especially the leaders, with negative images so that the Thai public would not support or sympathise with them. The interesting issues about the IO used at this time are as follows:

1. The objective of the IO was to show the public that the government wanted to maintain the rule of law and did not intend to use force against the protesters prior to the clash on 10 April 2010. After that event, the IO was used to convince the public that hard-line measures were increasingly appropriate.

2. The article also reveals that the 10 April event was a turning point in IO. The appearance of the “men in black” (for the first time in an Al-Jazeera’s video clip) was an important development for IO. After April 10 IO attempted to portray the “men in black” as terrorists within the network attempting to overthrow the monarchy, hence creating more fear in the public. This was a critical element contributing to the success of IO (p.72).

3. The article also points out that there was daily information warfare against the Red Shirts. This warfare involved producing pictures and video clips that focused on the dedication of the soldiers. For this reason, the soldiers were told to be careful when they held weapons as pictures of flat shooting or the control of protesters with weapons were detrimental to the operation.

The IO team followed the events closely, collecting pictures and clips and editing them professionally for further dissemination (p.75). The author says “CRES spokesman disseminated many video clips that they thought Thai society would definitely believe to be true during such a crisis”. He mentions that some pictures were taken from military operations in the southern provinces, such as a picture of a soldier being fatally shot (p.73).

Moreover, after the chart of the network to overthrow the monarchy was releasted, the IO team had to investigate and find evidence of the linkages. This was to convince the public that this network was real (p.75).

4. At the same time, the pictures and video clips of the Red Shirt had to contain the message that they were armed, cruel, and destructive. These pictures were reproduced and circulated. Examples included a picture of protesters using a child as a human shield behind a pile of tyres, and pictures Red Shirt protesters attacking convenience stores, ATMs, banks, and a power plant in Khlong Toei (p.72).

5. The author also claims that the government selected pictures that could justify the operations of security authorities, focusing on the need to restore the rule of law. These images and video clips included those showing Red Shirt’s attack on important buildings;the injury and death of the soldiers; the invasion of the Parliament and the Office of Election Commission; soldiers being beaten to death by Red Shirt guards or shot by unidentified snipers; and some Red Shirts carrying guns in the middle of a highway. The pictures of the invasion of Chulalongkorn Hospital also increased the legitimacy of the government to end the Red Shirt demonstration (p.73).

6. The author states that the chaos after the surrender of the Red Shirt leaders leading to arson in Bangkok was the highlight for the IO. The IO team produced a series of video clips that were edited from public speeches of the Red Shirt’s leaders on different occasions to create a narrative that they had planned and instigated Red Shirt protesters to prepare for arson. This was to convince the public that the burning was well arranged and supported by terrorists (pp.72, 76).

7. The closure of Peoples Channel (PTV) was also an important tool in shutting down communication between Red Shirt leaders and their followers. This was like blinding the Red Shirt supporters as the only public television accessible was the state-run channels.

8. The author also believes that the cyber network of the “multi-coloured shirts” assisted this intelligence operation without any intervention from the state. The network became a new force in opposing the Red Shirt on the internet by distributing pictures and opinions through forwarded mails, social network pages and web boards.

9. The author argues that the unity of the IO team between the military and the government circle was critical to its success. The close cooperation between them brought about a division of labour and consistency in counter-attacking information negative to the government. The team included the Government Public Relations Department, National Broadcasting Services of Thailand (NTB), and TV Pool which were under the supervision of Sathit Wongnongtoey, the head of the information unit of the Centre for Resolution of Emergency Situation (CRES), and the government spokesmen including the Democrat Party’s spokesman. The author praised the work of Panithan Wattanayakorn and Colonel Sansern Kaewkamnerd . Panithan has an academic background and could effectively respond to questions both in Thai and English, hence increasing credibility of the government side. At the same time, Colonel Sansern, whose personality was spontaneous, humorous, and charming, was able to explain difficult and serious issues in a vivid and relaxing way during the press conferences (p.71). Colonel Sansern was then a centre of public attention especially from women, and a facebook fan page was created for him (p.75).