An interview with Ridwan Kamil

Editor’s note: ANU researcher Dr Ross Tapsell met Bandung mayor Ridwan Kamil the day after his victory in the West Java gubernatorial election. Ridwan was happy to answer some questions on the record for New Mandala readers, and a transcript of the Q&A is provided below.

How would you assess your victory in the context of broader recent trends in Indonesian politics?

I am very happy. Why? Because there is no such thing as what happened in Jakarta. People are getting rational. No issue in religion, no issue in ethnicity. It’s more about competence. I’m selling ideas, I’m selling the future. I’m selling the hopes that people like and believe. So that’s why I am very happy. And also West Java election is very peaceful. There is no news about something bad—so far so good. And I’m reaching the millennials which is the holder of Indonesia’s future. So I’m the face of their future. If Ridwan Kamil can, so they also can. So I think this is a historical moment not only for me and West Java but also for Indonesia.

Yes there was not an explicit Islamist campaign in West Java. Is that because candidates adjusted knowing what happened in Jakarta? For example your choice of Deputy; [and] getting along Ustadz to your campaign events; I see there is an Ustadz waiting outside about to meet you now. Did you adjust your campaign to target these voters more?

In Indonesia perception about politics is always divided in Islamic image and nationalist image. So if the combination comes from both, people consider it as a balance. People consider me more as nationalist, which means I have to find a vice-candidate that has an image which is more from Islam. This combination is really the image of the candidate number 1 [our pairing]. So if there is issue which is shifted from rational logic argument to more religious I have a vice-governor who can answer. That’s why we are very solid image so far because of this perception.

And getting Ustadz? Is it now part of a candidate’s job to get these people along, like Ustadz Effendi who was going to come to one of your campaign rallies, and there is someone outside waiting to meet you, for example.

That’s not uncommon. Because in the way we do things we always pray first. So for people to see that the campaign is not about a tangible dimension but also we believe success is part of intangible dimension, part of God to create destiny for us. Bringing an Ulema is a necessity.

[Ridwan interrupts the interview to ask an aide if indeed the Ustadz has arrived, and tells the aide to be his tour guide around the Taman Sejarah building…]

A lot of people are saying you’re a nationalist but also a pluralist candidate.

How do you reconcile being a pluralist candidate but not standing up for LGBT when the time came in this campaign?

The LGBT is a controversial thing, not in your context but in my context. I lived in America where it was no issue. I lived in Hong Kong where it is no issue. But I live in Indonesia where there is an issue. By the opponent claiming I’m a supporter of that issue, it really created a massive problem to my electorate. My personal view is always the same: I’m a Muslim so anything says by the Koran I will follow. But as I said, I cannot do more without the formal law. But if that issue come to the public, creating an issue, then my responsibility is to take care of that in the public area. But when it comes in the private realm, I have no right to do anything about the personal life in the private domain. But when your private personal choice preference, you create an issue in the public realm, then it becomes my problem. So I am very clear.

On the black campaign, I know it happens both online and offline, I am familiar with techniques to counter this stuff online, but what about offline? Which groups or figures do you turn to in order to counter black campaigns offline?

Offline I have 30 volunteer groups. I have been supported by four parties, and two additional parties. So for example, there is a negative campaign saying, “Long live Jokowi if Pak Ridwan wins”, to degrade my electorate, because some of my electorate vote for Prabowo, for example. They try to associate me with Pak Jokowi 100% so Prabowo voters will leave me. The night they put the poster everywhere, I contacted my volunteer groups and within 24 hours it was all taken down. The most recent occurred in the last 3 days [when campaigning is not allowed] but my prediction was this created massive sympathy towards me. In Indonesia it becomes a positive.

You mentioned the national dynamic here in this election. Last time we spoke [in February] you talked about needing to win over President Jokowi’s support. You then went to Jakarta, but didn’t get the PDIP nomination. But as I understand it the President remained supportive of your campaign. How did that dynamic play out between PDIP and the President?

I think the interest to PDIP is to make sure Pak Jokowi wins again. Since more or less we have the same platform, then PDI[P] is not really away from me. We keep some communications discussing the latest updates. Even Pak TB Hasannudin, my opponent, came forward to say congratulations—the first of all candidates to do so. That gives you a gesture of how we have a good relationship under the table and during the campaign. The president called me last night.

So did the president give support for your campaign?

Yes, in many dimensions that I cannot tell. You were a local mayor, now a governor. Is there still hope for Indonesia that local politicians can go on to be president like Pak Jokowi?

This is the result of one-man-one-vote. If people like you, you already have half of the ticket to win the political position. Half of the ticket is about getting the nomination. But getting nomination without the likes of the people becomes a disaster in the campaign, as you saw here in this campaign. So I think the democracy we have today creates a new route for the national leader not always from ex-ministers, not always owners of the parties. You can be nobody like me coming form regional leaders, getting popular more and more, and people appreciate. For example, one-third of comments on my Instagram do not come from West Java. “Mr Ridwan I’m form Kalimantan, Sulawesi, Bali, we like you, someday we want to vote for you”. So this is an indicator that whatever we do in the regional level is also consumed outside the regional level. Pak Jokowi paved the way to give the new route from regional level to national leader. 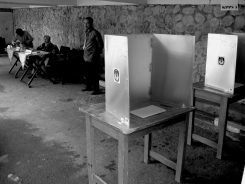 From that simple logic yes, but I will not discuss further because it is too far.

Last technical question: Tempo had an editorial that said party nomination thresholds should be changed or abolished. What are you thoughts on this? Do you agree?

I always agree for everything that makes an easier procedure for a good person to be nominated. If it is missing this threshold and it creates a better opportunity for good people to run for public service then I agree with that argument.