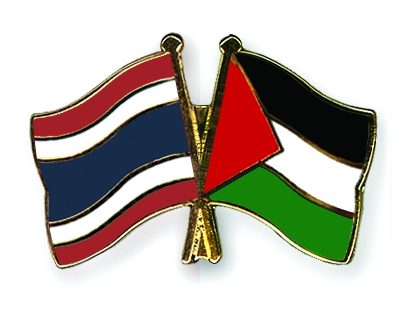 Interview with a Palestinian refugee in Thailand With all the turmoil going on in the streets of Bangkok, it is easy to forget that many human tragedies continue to be played out day-after-day throughout Thailand. One such tragedy is the plight of Palestinian refugees displaced by the fighting in Syria. Already expelled from their homeland in Palestine, they have painstakingly over the years built up new lives in Syria, only to see them shattered in the latest rounds of conflict.

I recently interviewed one such refugee to try and shed more light on the situation they face.

Ian: How many Palestinian refugees are there in Thailand at present?

Raheem: There are currently 310 persons in Thailand

Ian: How many are arriving each week?

Raheem: They have stopped arriving at present because of lack of money and new restrictions on movement both in Syria and Lebanon.

Ian: Why did you have to leave Syria? Tell us a bit about your personal situation.

Raheem: First you need to know that Palestinians are classed as visitors in Syria. Palestinians have been in Syria since the Israeli occupation of Palestine in 1948. We have been visitors for almost seventy years. When the trouble erupted in Syria the Palestinians wanted to stay separate from both the government and the Free Syrian Army. They didn’t want to be seen to take sides. The problem was that whenever we came across one side or the other they kept asking us “Which side are you on?” We thought long and hard about our situation and eventually decided to start looking for other countries to move to. Many countries would not consider us because we are not issued with full passports, only travel documents. This is because Palestine is not recognised as a fully fledged state.

Ian: What made you decide to come specifically to Thailand?

Raheem: We came to Thailand because it was the only country prepared to grant us visas. Not only that, they did not insist on us paying a deposit before we left Syria, like many countries would. The whole process was virtually without problems. We paid about $500 dollars each for a three month visa to Thailand.

Ian: How did you get here?

Raheem: We left Damascus for Lebanon by bus. From Lebanon Airport we took a plane to Abu Dhabi and then a flight on to Thailand. My group consisted of a total of twenty six persons, fourteen of whom were members of my family. This included my grandmother who sadly passed away one week after we arrived in Thailand. At the time we had no money to rent an apartment so we had all the family’s women living in one room and all the men in another. There were nine women in the women’s room and my grandmother who was aged 70 developed breathing problems. She already had a medical problem and the breathing difficulties on top of this proved too much.

Ian: What did you start to do when you got here?

Raheem: The first thing we did was to try and find jobs. Most of us have a high education (I am qualified in law and business administration from Damascus University, for example). Unfortunately we cannot speak the Thai language – Palestinians traditionally learn French and English. Most Thais we met could not speak English and those who could were not able to speak it very well. So we ended up in the Arab quarter looking for any job we could find in the catering line. Even then we were faced with the hurdle of needing a work permit. This would cost the employer 25,000 Baht so they preferred to employ Thai or Burmese workers instead. We have at least been lucky to make friends with members of the Palestinian Solidarity Campaign in Thailand and this has made life a little easier for us.

Ian: What is your personal visa situation?

Raheem: My visa expires in March. When I came I took out a one year visa for $1750. However, after it expires I will be unable to work at all and the situation will be very difficult.

Ian: How have you fared with the UNHCR in Thailand?

Raheem: It is a difficult situation. We appreciate that the UNHCR has a responsibility for all refugees to Thailand, not just ourselves. However, we feel that UNHCR could be better equipped to deal with our specific situation as Palestinians. We feel they should have closer links with UNRWA (the United Nations Relief and Works Agency for Palestine Refugees in the Near East). We are already registered with that organization as refugees. We are obliged to join the back of a long queue at UNHCR in Thailand to register as refugees on an individual basis when confirmation of our status can be easily arranged. Acceptance as a refugee in this process can take a year with another year or two before resettlement in another country. The result of this approach will end up making the Palestinian refugees illegal aliens in Thailand as their visas run out. We don’t mind waiting if the process can be finished within a year, that would be fair, but the prospect of waiting up to three years is not fair. Bear in mind that many of us have relatives in other countries already waiting to take us in.

When we arrived in Thailand we had to show all our documents to the UNHCR so they have all our information in their system already. All of my documents from Syria, travel documents, ID, driver’s licence identify me as a refugee, as you can see [shows documents]. UNHCR insist they have to check all these documents. We don’t know why they can’t check with UNRWA. They (UNHCR) don’t have staff on the ground in Syria to check with the Syrian authorities. Checking with UNWRA would take hours whereas we are being asked to wait for months.

Ian: How many of you already have relatives abroad willing to take them?

Raheem: Easily more than half of us have relatives waiting in countries such as Canada, US, Sweden, Norway and Australia ready to take us in. For myself I have a lot of family in Australia waiting for me.

Ian: You mentioned your own situation where you are sharing a single room. Are all Palestinian refugees in similar circumstances or are there any in the Immigration Detention Centre (IDC)?

Raheem: Actually I am lucky because my visa is for one year. Other Palestinians whose visas have run out find themselves in an illegal situation. Recently Immigration visited a place in Ramkhamhaeng and arrested one lady with her two boys and one man with his ten year old son. The next day they returned and arrested another lady, together with her two children, aged two and seven, and also one man. All of them now are in the IDC.

I don’t really want to talk about this because it is a miserable situation. As you know, we are Muslim and that means we have to eat halal food; sometimes this is not available. Detainees have had to wait for up to two days before a visitor brings any halal food for them. The visitors are those of us with valid visas. By next month we will be down to half the number as our visas expire. Luckily we have made some very good friends in the Thai community and some of them are joining us in visiting the IDC. On the other hand the detainees are beginning to suffer from mental problems, especially the children who have already witnessed a lot of bad things in Syria, and one of whom as a bad kidney problem anyway.

The UNHCR can move quickly when they have to. There was a group of Palestinian refugees fleeing from military service in Syria. Thai immigration did not want them in the country and within 72 hours the UNHCR had supplied them with refugee certificates. They are now in the Philippines. I do not see how these people can be more of a special case than the lady I mentioned whose child has the kidney problem.

Ian: What is your message to the Thai government?

Raheem: We know that Thailand is not a rich country and the high number of Palestinian refugees here must be a burden for you. We cannot spend money here like tourists so we ask you to help UNHCR speed up its processes in order that we can move on.

Ian: How can people in Thailand and elsewhere outside your community help your situation?

Raheem: There are a lot of things we need but the most important is for UNHCR to move faster with our case. If anyone can put pressure on UNHCR to speed up this would be greatly appreciated. Only then will we be able to move on and maybe get passports instead of travel documents. These travel documents restrict our chances in life. I was working for a Canadian company in Syria but I was unable to represent them abroad because I did not have a passport. I could not even represent them in Egypt.

If anyone has any ideas to help us, please include them in your comments.

Ian Hollingworth is a retired teacher based in Thailand and is a member of the Palestinian Solidarity Campaign in the country.