Interview with director of Enemies of the People 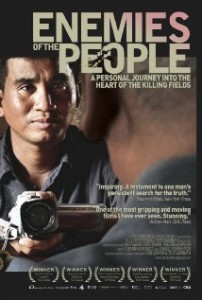 One of the most striking recent examinations of the Pol Pot period was the groundbreaking documentary film Enemies of the People. Widely acclaimed and recipient of over 30 international awards and an Oscar nomination, the film highlighted a growing desire to grapple with the legacy of Cambodia’s traumatic past. Following its special edition DVD release, I caught up with the film’s British co-producer and director Rob Lemkin, to discuss his views on the film and its contribution to history, dialogue, and reconciliation in Cambodia. Having produced over 50 documentaries for several major TV networks and won numerous awards and accolades himself, Lemkin is a veteran of investigative journalism and an erudite researcher of high repute.

I began by asking his opinion on why the film was so well received. “I think what we had was pretty unprecedented, in terms of going into the topic with such a level of frankness. We wanted to try to find new ways of looking at the Khmer Rouge. To try to get out of the unhelpful paradigm that tells you the same thing again and again, about the extremity of the violence and the unpleasantness of it all, and to try to take you to another dimension. We were able to make human connections with people in the Khmer Rouge, to put a human face on perpetrators and let people say maybe there is a possibility of a positive dialogue rather than a punishment or prosecution based dialogue.”

“That is the point where film does work properly, because it enables the audience to see inside of this thing. Was this really going on because there’s one or two people in an office saying ‘yes purge, go now?’ No it wasn’t. It was a much more amorphous, on-the-ground contest for power that was going on, which of course had large interests behind it as well.

“In Enemies these people weren’t just being squeezed in order to make self-incriminating confessions about crimes, they were actually being encouraged to enter a truth telling process, in which the process of telling is perhaps even more important than the truth that’s told. That’s something that has resonated with people in a way that I think few other works on the subject have really done. Previously I think people have either not really made many of these types of connections, or they have made very specific, evidential types of connections instead.”

Such comments seem apt at a time when fear of retributive justice persists. The ECCC has recently tried to reassure witnesses that they will be protected from prosecution if they testify in the court. Such reassurances have not always been entirely convincing, however, since they rely on limiting the jurisdiction of future courts, a constitutionally dubious proposition.

In a country where the past is never far from the surface, many Cambodians wish to move on from such a dark episode, and this may be as much a product of trauma and weariness as it is of vested interests. Yet for that to be achieved, only full and thorough disclosure may put to bed decades of intrigue, misinformation and the legacy of mass murder. Despite this, debate continues over the ECCC’s ability to foster any meaningful reconciliation of the type so badly needed in modern Cambodia.

“The question mark that I think there is over organisations in Cambodia is to what extent are they truly interested in reconciliation? Many of them are more interested in justice and effectively therefore with a prosecution aspect to their work, which means of course that you can’t talk to people like Khoun and Suon [two of the film’s most honest confessors], because there’s nothing in it for them.”

By contrast, some of the most powerful footage on the special edition DVD comes from a videoconference that the filmmakers set up, in which a group of Khmer Rouge victims confront perpetrators from the film face to face. Their exchanges are extremely frank, and what develops is an appreciation that the line between victims and perpetrators may not be as clearly defined as those terms may suggest. Lemkin has previously spoken about his desire to “hear the roar that lies on the other side of silence” in post-conflict societies, and this videoconference provides a fascinating model for reconciliation based on facilitating this sort of open dialogue.

“I don’t think the tribunal has too much chance of reconciliation,” he continues. “If the three who are on trial there now end up getting sentenced to life I’m not quite sure what reconciliation will follow after that, because there are thousands of Khmer Rouge people who were in various positions of responsibility from 75-79, some of them in government now and some of them not in government. They are not really integrated into that situation, and so that means the whole history of why all this violence happened, trying to understand it and analyse the causes of it remain as obscure as ever.”

The search for a fuller understanding of what really happened in the killing fields pervades Enemies of the People, and is central to the aims of the film. “It’s a current and problematic political issue in Cambodia still now, because there is a very direct connection between the current government and that history, between the organisations and individuals. In Cambodia I think its decided by the authorities that those investigations should not be done. That then means that any blurring that there might be over the origins of the Cambodian People’s Party and the regime that took over from the Khmer Rouge in 1979 can all be forgotten about.

“In a country or a society where something very extreme and horrible has happened there is a big interest to be able to block that out and package that period off, to bracket it out of the rest of history. But if you start seeing it as part of a much more connected bit of history which has links with what went before and what went after then that involves asking some quite searching questions of yourselves as a society.

“When people, particularly Cambodians who are already of a certain amount of knowledge about the killing fields, watch Enemies of the People they’re still left with the question of what was it that caused all of this violence? Why did it become as intense as it did? I think also there is a feeling that after 30 years, after a generation has passed that it is more possible to glean some insight, but it needs to be answered during the course of the next few decades, and historians and researchers will have to try to find out.”

Lemkin has a keen appreciation of the central role historical study has to play in memorialising tragedy, as well as in nurturing a nation’s shaken conscience after the events. Whilst wanting to avoid spurious comparisons, the spectre of Nazi Germany is also not lost on him. “I think Cambodia has not been well served by research, which has always tended to slightly dwell on the Khmer Rouge as a pathological regime that can only be interpreted as various degrees of evil. The written documentation upon which so much information has relied and the interviews upon which so much of the interpretative analysis has relied have always been from one particular source.

“By and large it has come from what the Vietnamese government provided, and historians who have been able to go in and ask have only been able to speak to people through permissions given by the Vietnamese. When they’ve spoken to Khmer Rouge people it has been usually in the context of rather confrontational interviews. As a result much of history ends up not really emerging, because people are not around to tell the story.

“By contrast there has been much, very substantial pieces of work done on the history of the Nazis by people like Ian Kershaw and Christopher Browning that have been able to be much more creative analytically. In other words, rather than going in with your mind made up, actually try to get yourself back into that time. It’s fascinating because it was so scary and so violent it’s almost impossible to imagine what it was like to live under that.

“I think for people who live in Cambodia, many of their memories are informed by the stories that get told, rather than going back to what it was really like. The reasons for going back and finding out what it was really like is not necessarily to forgive or forget what happened, so much as to understand what happened in the context of the history of the country and the experience of people, so that these things can be harnessed towards positive energies in the future.

“It’s always pretty bad when people on a personal level, let alone on a whole societal level spend so much time thinking about the terrible past they had. It’s better if you’re free and able to embrace the future. That’s one of the things that the 2 disc DVD is trying to do is to put a whole load more material out there within the confines of a small commercial release, to get a lot more of it in the public domain than there was previously, and to facilitate this truth telling process. Hopefully we’ve forged a path there that people will want to follow.”

The special edition of Enemies of the People is available now.

Fionn Travers-Smith is a history postgraduate student at London’s School of Oriental and African Studies.