There I was, trying to write a think piece on the big stories emerging from this week’s announcements of candidacies for the June regional elections (pilkada). Then, one story suddenly emerged to overwhelm all others, in the form of a dummy spit by a disgruntled Gerindra cadre who missed out on his nomination.

For those new to the story, here is a short explainer: on Thursday 11 January the prominent businessman-cum-politician La Nyalla Mattaliti held a press conference in Jakarta, at which he recounted how an agreement with Prabowo Subianto for Prabowo’s Gerindra party to nominate him for the governorship of East Java fell through at the last minute. La Nyalla claimed that Prabowo had requested a payment of Rp40 billion (A$3.5 million) in exchange for Gerindra’s support. Such payments to parties, commonly referred to as mahar (dowries), are commonplace in Indonesian local elections. A dispute over the timing of the payment led to Prabowo withdrawing his support, despite La Nyalla already having gone into his own pocket to plaster the province with billboards featuring both men’s pictures. I’ll be the first to admit that La Nyalla’s public airing of Gerindra’s dirty laundry makes for a fun story, no matter how self-serving or embellished his testimony may be. Any scandal that embarrasses two politicians as odious as La Nyalla and Prabowo at the same time has to be welcomed, you’d think. But the La Nyalla–Prabowo falling out is in itself of little broader significance to the political landscape in the lead up to the 2018–2019 elections. 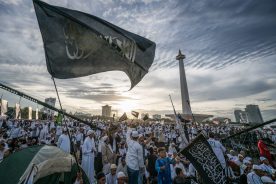 Rather, what made La Nyalla’s press conference so significant was the participation of Forum Umat Islam (FUI) boss Muhammad Al Khaththath, who spoke both in defence of La Nyalla and to air the grievances of 212 movement leaders about the 2018 pilkada nominations. (In 2014, Chris Chaplin wrote in New Mandala about FUI’s support for Prabowo in that year’s presidential elections.)

Al Khaththath’s statement is revealing enough about what’s going on between the 212 ulama and the pro-Anies political parties on its own that commentary from me here would be redundant. So, for readers’ convenience, I have quickly translated this (apparently verbatim) transcript of his remarks published by Detik. Any mistakes in the translation are, naturally, my own; I welcome any corrections and suggestions in the comments field or via email.

Firstly, we would like to express our thanks to Progress 98 for inviting us, and to the journalists.

Secondly, we feel concerned about the case affecting Brother La Nyalla and a number of other names we proposed to party leaders so that these cadres of the 212 Actions to Defend Islam—out of 171 [regional elections held in 2018] we only requested 5 to be given special recommendation, a special path, as it were. If we’re treated just like anybody else, what did we give those recommendations for?

We wrote a letter to—and I directly delivered it [sic], as it happened there was a meeting of three party leaders [a reference to Gerindra, PKS and PAN, the pro-Anies coalition from 2017] at the official residence of the MPR Speaker [PAN Chairman Zulkifli Hasan] so I directly gave it to the three of them and that letter was signed by [conservative ulama] KH Aburrosyid Abdullah Syafii, by myself, and by [KAHMI/Islamic Students’ Association Alumni Corps leader] Pak Haji Harun. Both of them have left the Islamic Centre and are on their way here but I don’t know whether they are still joining because there’s a traffic jam at Tanjung Priok.

So from the five names [recommended to party leaders], one of whom was Mas La Nyalla, not one was given a nomination [for regional office]. We believe that the ulama have already fought by mobilising the very phenomenal 212 Action to Defend Islam, and in Jakarta we were successful in bringing up Governor Anies-Sandi [sic], who were supported by the ulama.

Therefore, Habib Riqieq’s message, when I went to Mecca on hajj recently, was to request that the leaders of these three parties to “copy and paste” what was done in Jakarta, so as to gain victory from Allah SWT in other provinces.

Now of course I’m not sure, but there may have been a misperception from these three parties that it was if we were supporting them with a blank cheque. Now, this may have been their understanding, even though our supporting the emergence of Governor Anies-Sandi [sic] was done in the spirit of 212, the spirit of Al Maidah 51. Therefore, we hope that the same would happen in other places.

In a number of meetings with the three party leaders, they indeed reasoned that there were a number of provinces in particular where the Islamic umat is not dominant—if so we would not do it, like in North Sulawesi, for instance. Where else? Papua, in East Nusa Tenggara—we understand. But when it happened in East Java, that was confusing. There were many complaints from below. This is what I want to convey to journalists: many complaints from below made their way to me, showing how in many provinces they showed the pictures of the coalitions that were not in line with what we have thus far supported. It was all over the place, and it was requested that ulama admonish the three party leaders.

Now, before that admonishment, I want to explain that, let alone the others, the five names [of candidates] that we requested were not given a decent response. I waited until the recommendations were coming out, until two in the morning, in Cilandak [the suburb where PKS HQ is located], in Ragunan [a similar reference to Gerindra party HQ] until I was bitten by mosquitoes. Until two in the morning but after a few days they still didn’t come. What was up, was the question.

Now, this has become our concern. It turns out that there are cases like have been laid out by Mas La Nyalla. Inshallah what is being done by the complaints centre will hopefully really work and the facts can be brought to us. Inshallah shortly we will gather the ulama and ask what a fatwa about transactional politics would be like. Is it haram, or makruh, or mubah, or Sunnah, or even wajib [see here for an explainer]. The five of these are Islamic law, we will find which of them it is.

I also cannot answer now but inshallah later we will take it to an ulama deliberation to attain a firm stance, and also to reevaluate what Habib Rizieq called for—that we would support the three parties like in Jakarta. Because the fact is they cannot be supported in the sense that alright, we want three, and they go with others just like that.

So there have been a lot of complaints in the community. Now, this shall also become a matter for the ulama’s deliberations. I think that later the ulama will hopefully discuss properly and will give a proper evaluation and that after the deliberations the best stance will emerge.

So we want to say thank you for the invitation to be here to listen to what has happened. I do not take any stance here, but inshallah we will take what I have heard from these cases, and perhaps if we are given recordings as proof I will be happier still. Inshallah later in the ulama’s deliberations we will dissect and unpack it all.

With that from me, hopefully Allah SWT will open all of our eyes and hopefully our country will be protected from money politics whose end point—we may also choose to dissect the extent of the drawbacks of these direct local elections. I mean that what was attempted by the DPR previously [in 2014; see here for details], indirect local elections—which were torpedoed by a Perppu [presidential decree]—this maybe needs to be reevaluated.