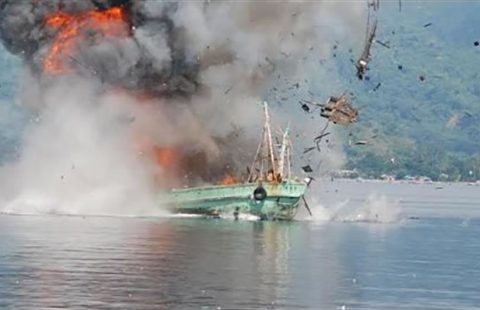 Jakarta left all at sea by island clash with China Jakarta has taken a hard stance with those caught illegally fishing in its waters.

What the South China Sea reveals about Indonesia’s foreign policy.

In mid-March, a Chinese Coast Guard rammed one of its own fishing boats to pry it free from Indonesian authorities who had seized it for illegal fishing off the Natuna Islands – the northernmost undisputed Indonesian island group.

The incident has put a spotlight on Indonesia’s foreign policy under President Joko Widodo or Jokowi. Analysts have carefully examined the incident in great detail (see here and here).

In the incident’s wake, the foreign minister, defense minister, and fisheries minister responded in different, and somewhat overlapping, ways. The fisheries minister has become the public face for Indonesia’s visibly angry response, while the military, according to press reports, continues preparations to upgrade its facilities in the Natunas.

Several diplomats wrote op-eds slamming Beijing for its disregard of the United Nations Convention on the Law of the Sea (UNCLOS) and the rules-based order Jakarta has always pushed for in the management of the South China Sea. Jokowi’s chief foreign policy adviser, currently ambassador to London, noted the importance of illegal, unreported, unregulated (IUU) fishing as the common challenge for Indonesia and China; rather than sovereignty as the Natunas are undisputedly Indonesian in the first place.

Yet, after delivering an official diplomatic protest to the Chinese Embassy, the foreign minister insisted that the incident had nothing to do with the South China Sea dispute. Jokowi also instructed Luhut Pandjaitan, the coordinating minister for political, legal, and security affairs, to take necessary steps but reminded him that China “remains Indonesia’s friend.”

This seemingly incoherent response reveals some of the broader trends in Indonesia’s foreign policy in recent years.

First, despite the growing literature on how the post-1998 democratic transition and consolidation has overhauled foreign policy-making, foreign policy remains strongly, perhaps even idiosyncratically, a presidential affair.

This is partially a legacy of the centralised system entrenched under Suharto’s New Order, and partially because successive post-Suharto presidents never paid serious and sustained attention to developing a professional, well-funded foreign ministry and a well-oiled foreign policy-making system – particularly one that can spans different parts of the government to harness the country’s different tools of regional and global engagement.

For almost two decades after 1998, only the organisational reforms instituted under foreign minister Hassan Wirajuda are noteworthy. But even those reforms were not well-funded, nor were they sustainable given some of the entrenched bureaucratic challenges and the ebbs and flow of presidential support. It is not surprising therefore that the personal characteristics of different post-Suharto presidents shaped and shoved Indonesia’s foreign policy.

What this means is that Jokowi’s personal aloofness on foreign affairs, his seemingly narrow domestic economic agenda, and his concerns with domestic politics, have prevented the office of the president to marshal the nation’s strategic community to forcefully, coherently, and consistently respond to day-to-day challenges, including in the South China Sea.

Furthermore, the absence of a dedicated foreign affairs staff inside the presidential palace (or an executive National Security Council, for that matter), the departure of key foreign policy advisers, and the increasingly lack of chemistry and trust between the president and foreign minister, Retno Marsudi, have further exacerbated this problem.

Second, Jakarta’s over-reliance on the “non-claimant honest broker” position on the South China Sea suggests the `path dependence’ of institutionalist thinking within the foreign ministry. Two strands of institutionalist thought are particularly salient: the belief in the virtues of international law along with a rules-based order underpinned by UNCLOS 1982, and the utility of multilateralism and ASEAN.

The first strand goes back to the 1956 Djuanda Declaration and has been sustained and strengthened by a series of influential diplomats and foreign ministers trained in international law for the past several decades. In the early 2000s, there were reports of a growing network of influential diplomats under the tutelage of foreign minister Wirajuda that came through the Indonesian representative office in Geneva (all steeped in international law).

The second strand goes back to the founding of ASEAN and the New Order’s efforts to ensure domestic stability and regime maintenance by pushing for regional stability in Southeast Asia. Indonesia’s leadership of the grouping and its position as the country’s foreign policy “cornerstone”– and the fact that many of Jakarta’s achievements were done within a multilateral framework — has sustained this institutionalist thinking.

According to a former member of Jokowi’s transition team, these institutionalist strands of thought often crowd out other “scenario-based realist” thinking on foreign policy, which is often critical in dealing with developments in the South China Sea. The institutionalist thinking has also led to pushbacks from the broader strategic community (including defense and fisheries ministries) in Jakarta concerned with China’s militarisation of the region and its constant encroachment of Indonesia’s maritime territories.

The logic of institutions is powerful but it is also glacial-paced. Meanwhile, as we can see, given the current escalations and rapidly changing “facts on the ground”, so to speak, in the South China Sea, Jakarta may need to realise it is being strategically blinded by its own lens and hindered by maritime governance inter-bureaucratic infighting

When it comes to the South China Sea, the Coordinating Ministry for Political, Legal, and Political Affairs should get the foreign ministry to talk more regularly to other agencies, particularly the Navy, Maritime Security Agency, and the IUU fishing task force of the fisheries ministry. The foreign ministry should also invest more in sending senior officials to attend regular inter-agency meetings and expand the number of senior diplomats sent to inter-agency courses, such as those run by the National Resilience Institute.

Given the prevalent view that Indonesia’s best and brightest tend to join the foreign ministry, policymakers should not let it become an isolated actor within the broader national security system and establishment. Additionally, House of Representatives’ Commission for defence, foreign affairs and information – charged with discussing issues related to its portfolio and formulating plenary bills for consideration by parliament –needs to be more involved in foreign policy-making and increase the budgetary resources for the foreign ministry.

The current budget only stands at roughly $549 million, with roughly 80-85 per cent devoted to routine expenditures and personnel salaries. This lack of budgetary support is not unique to Jokowi of course. According to budgetary documents compiled by CSIS Jakarta, the foreign ministry’s annual budget from 1999 to 2014 leveled at around $305 million on average, or roughly 0.69 per cent of the national budget.

We should bear in mind these broader trends and limitations in Indonesia’s foreign policy-making when expecting Jakarta to play a more proactive role in balancing the ongoing US-China strategic rivalry, and the peaceful management of the South China Sea disputes.

Evan A Laksmana is a researcher at the Centre for Strategic and International Studies (CSIS), Jakarta, and a political science doctoral candidate at Syracuse University’s Maxwell School of Citizenship and Public Affairs. He tweets @EvanLaksmana.