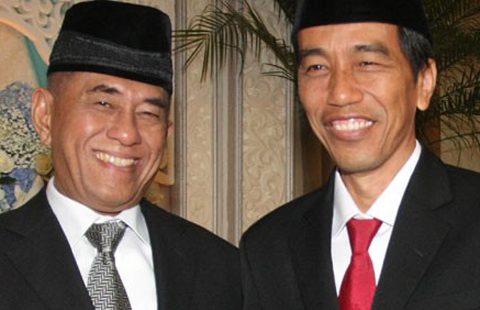 Ryamizard Ryacudu (left) is one of the many not so welcome faces in Jokowi’s new cabinet.

The first cabinet for Indonesia’s new, ‘reformist’ president, Joko Widodo, is striking for how bad some of the appointments are, writes Edward Aspinall.

Indonesia’s new president, Joko Widodo (Jokowi) promised to bring a new spirit of reform to Indonesia. Indeed, he has offered nothing less than a ‘mental revolution’. In his first real test, the formation of cabinet, Jokowi seems to have gone for realpolitik over reform.

What is striking about the new cabinet he announced on 26 October is how familiar it looks. It’s a cabinet with the standard mixture we have come to expect in democratic Indonesia: a few decent reformers are located in technocratic posts, but many party hacks also get seats. More appointments are surprisingly bad than are surprisingly good.

Much has been made of the fact that the new cabinet contains a high proportion of people (18 out of 34) with professional rather than party backgrounds. But Indonesian cabinets always contain a mixture of intellectuals, business leaders, and technocrats, alongside party appointees. This usually makes it possible for reformers outside the government to take comfort from the presence of a few individuals with records of integrity and professional skill in the cabinet. Things are much the same this year.

For example, the new minister for culture and elementary and secondary education is the highly respected Anies Baswedan, rector of Jakarta’s Paramadina University, and a man with many visionary ideas about the future of education in Indonesia. Pratikno, the rector of Gadjah Mada University and new State Secretary, is also highly regarded. Some of the technocratic and economic ministers are respected in their respective fields. The new foreign affairs minister, Retno Lestari Priansari Marsudi, is the first woman in the post and a respected diplomat (as is almost always the case). Nila Moeloek the new health minister is a professor of medicine at the University of Indonesia and a strong advocate for public health (she’s also one of eight women in the cabinet – a new record).

Overall, no doubt some of these professionals will turn out to be very competent and productive ministers. But it is striking that so few of them (Anies Baswedan is the obvious exception) have established independent reputations as reformers, even though many such people were included in the many lists of potential cabinet members that circulated in the lead up to the announcement.

What is really striking about the new cabinet is how bad some of the appointments are. Special mention should be made of the new Defence Minister, Ryamizard Ryacudu. It has been a 15-year tradition to appoint civilians to this post, as a symbol of civilian supremacy in the new Indonesia. This appointment breaks that tradition. It also appals members of Indonesia’s human rights community.

As Army Chief of staff back in the mid-2000s, Ryacudu not only infamously praised as ‘heroes’ soldiers who were convicted of murdering a famous Papuan independence campaigner, he also actively tried to sabotage the Aceh peace process and intensify military operations there in the aftermath of the December 2004 tsunami. He is the most conservative former military officer to have been included in a cabinet since 1999.

Another appointment ringing alarm bells in Indonesia is new state enterprises minister, Rini Soewandi. Like Ryacudu, Soewandi is a confidante of Megawati Soekarnoputri and owes her cabinet position to this connection. She was a trade and industry minister under Megawati, and was last year questioned by the Corruption Eradication Commission (KPK) in regard to her alleged role in the massive Bank Indonesia (BI) liquidity assistance scandal. It is highly suspicious that a patronage politician like this should be appointed to head the State Enterprises ministry, one of the ‘wettest’ in Indonesia and long a milch cow for the party that controlled it.

These appointments show that Jokowi has had to make compromises with the political parties who backed his presidential campaign and whose support he will need in parliament. Again, there is nothing unusual in this: Yudhoyono had six parties represented in his last cabinet; Jokowi has five. But it was believed that Jokowi would intervene strongly to ensure that the party appointees were highly reputable and effective, and he called on the KPK to screen candidates and weed out those suspected of corruption. This process did lead to some candidates proposed by the parties being abandoned. There is little evidence it led to an overall improvement of the quality of party appointees.

For example, in the weeks leading to the formation of the cabinet, there was much speculation that the appointees from Jokowi’s own PDI-P would include some of the party’s younger and dynamic reformers. This did not happen, and instead we see, for example, Tjahjo Kumolo, the party’s unscrupulous general secretary and all-round fixer appointed to the politically crucial position of Interior Minister (Kumolo is another new minister with the dubious distinction of having been questioned by the KPK). Puan Maharani, Megawati’s daughter and one of the most reviled figures in contemporary Indonesia, gets a senior coordinating ministerial post.

Likewise, Jokowi has stated that bureaucratic reform would be a critical priority for him, but has given the relevant ministry to an undistinguished Hanura party politician. The new coordinating minister for economic affairs, Sofyan Djalil, was an undistinguished minister for state enterprises during Yudhoyono’s first term and is in the new cabinet because he is close to vice president Jusuf Kalla. And so on.

It was always clear that Jokowi would have to make compromises with the political parties that backed him and the old forces of patronage that underpin them. In that regard, there is little that is surprising in the composition of the new cabinet. But it is surprising just how far he has gone in making these compromises.

Overall, this is a cabinet that continues rather than breaks with Indonesia’s emerging political traditions. To be sure, it is possible that some of the ministers will emerge as strong reformers. But at first glance, this cabinet is far from being the fresh start that Jokowi promised.

Edward Aspinall is a professor of politics at the Australian National University’s College of Asia and the Pacific.