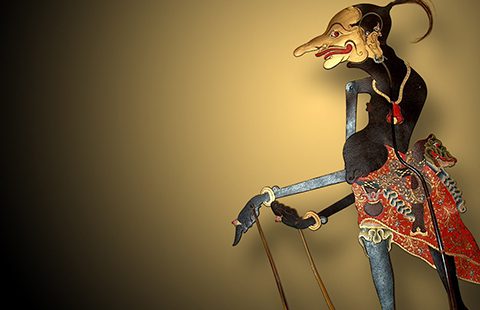 Jokowi: modern man of the people or divine clown? It may be early days, but it’s worrying that the hope and aura surrounding Joko Widodo’s election as Indonesia president is fading fast. Hamish McDonald writes.

Just about everyone following last year’s elections in Indonesia got hooked by the beguiling Jokowi story: the Javanese boy raised in a squatter home on the banks of a river in Solo; his carpenter father peddling lumber from one side of the house; the skinny diligent kid studying hard through the state school system, getting into the Gajah Mada University in Jogjakarta to do a forestry degree; then becoming mayor of Solo, tidying up the city streets, building up its tourism image as a city of crafts and tradition, pioneering a local health and welfare system, banishing the Islamist fanatics back to their pesantren (Muslim boarding schools) on the city fringes; then taking his model of in-touch governance to Jakarta in the 2012 elections.

As we know, the Jakarta governorship was a demonstration model of the kind of leadership he was to offer the nation: the blusukan or walkabouts in slums and markets, the quick start on building a metro system after 30 years of indecision, a more concerted approach to reducing the floods that paralyse the city every rainy season.

It couldn’t have been more of a contrast in last July’s presidential contest: this candidate out of the ranks of the orang kecil, the little people, whom he called the publik, suggesting citizenry with rights, rather than the rakyat, the people, the word more commonly used by politicians, suggesting a passive mass. “Jokowi is us,” went the main campaign slogan. Jokowi on one of his well-known ‘blusukan’.

Jokowi won despite a huge weight of money wielded by Prabowo’s ‘Red and White’ coalition, some dirty misinformation, perhaps some attempted interference at polling booths, and post-election legal appeals.

He has only been in office since October, a mere four months. This is a presidency very much on its training wheels.

It has also started with a very poor hand of cards in the Jakarta political casino. The so-called Great Indonesia coalition supporting Jokowi, centred around the Indonesian Democratic Party of Struggle or PDI-P, has only 37 per cent of the seats in parliament, the DPR. The rejigging of the Indonesian political system after the fall of Suharto in 1998 transferred power from the presidency to the legislature. Notably, the president has no American-model veto over legislation.

In addition, the presidential election had a third contestant lurking in the background: Megawati Sukarnoputri, daughter of the first Indonesian president, Sukarno, founder of the PDI-P in the last years of Suharto’s New Order, and president between the impeachment of President Abdurrahman Wahid (known as Gus Dur) in 2001 and her inconsolable election loss to Susilo Bambang Yudhoyono, or SBY, in 2004.

Early in 2014 she reluctantly handed the PDI-P candidacy over to Jokowi when polls showed he was the only candidate who could beat Prabowo while others still remained in the race, such as the business tycoon and politico Aburizal Bakrie. But she remains in the PDI-P chair, from where she has been a backseat driver for Jokowi throughout the election and into the presidency.

Her influence was shown in the line-up of Jokowi’s cabinet. There were some very good choices: the university rector Anies Baswedan as minister for school-level education, the former railway chief Ignasius Jonan as transport minister, and a moderate Muslim figure, Lukman Hakim Saifuddin as religious affairs minister.

But there were some very dubious ones, mostly ‘ring in’ friends of Megawati: the former army general Riyamizard Ryacudu as defence minister (in 2001 as army chief he’d praised as patriots the Kopassus soldiers who murdered the Papuan leader Theys Eluay); Rini Soemarno, a Jakarta corporate wheeler–dealer with questions about corrupt deals hanging over her head who was made minister for public enterprises; and Megawati’s own daughter, Puan Maharani, as coordinating minister over the education and welfare portfolios (an area where she has no known expertise).

Despite this, Jokowi got off to a very good start. In his first month he grasped the nettle of cutting subsidies for fuel, a decision that can save the government about US$10 billion. The windfall will be spent on infrastructure and human development, Jokowi’s priorities. The falling international oil price has since allowed the government to completely stop the fuel subsidy, perhaps doubling the saving. The AirAsia crash near Surabaya in December also showed a competent and caring response to disaster.

Unfortunately, Jokowi has looked less decisive and much weaker in the New Year.

In mid-January, almost certainly at Megawati’s prompting, he put forward one of her personal friends and favourites, a police general named Budi Gunawan, as the sole candidate for parliamentary endorsement as chief of the National Police, a post that had not actually fallen vacant.

This immediately turned into a crisis when the immensely respected Corruption Eradication Commission, the KPK, named Budi as a graft suspect because of some millions of dollars of unaccounted-for wealth.

The police, supported by a noisy claque of PDI-P politicians, including ministers in Jokowi’s cabinet, then turned on the KPK and its four commissioners.

The chairman, Abraham Samad, was accused of breaching his oath of political impartiality by talking last year about running for vice-president alongside Jokowi; at whose instigation is not clear. Then the police alleged he had helped reduce the sentence of a politician convicted of corruption, in return for his influence in the vice-presidential choice. The police also arrested a deputy commissioner, Bambang Widjojanto, on perjury charges brought by a PDI-P politician in a case that had already been dismissed by a court. The charges have meant both Samad and Bambang have had to step aside from the KPK.

A lawyer has also filed a police complaint against another KPK deputy commissioner, Adnan Pandu Praja, over alleged mishandling of company shares in 2006. Police are investigating the fourth commissioner, Zulkarnain, after a convicted embezzler accused him of bribery in 2008.

The barrage of criminal cases threatened to decapitate the anti-corruption commission.

Overwhelmingly, the Indonesian media sees no merit in any of the cases, only revenge by police at having one of their insiders fingered for alleged corruption. Indeed, police officials known to be close to Budi initiated at least one of these investigations. The sense of Jokowi as a political captive increased in February when a visit to neighbouring Malaysia took an astonishing turn. The president toured the factory of the Malaysian car manufacturer, Proton, the loss-making state white elephant set up under the contentious prime ministership of Mahathir Mohamad, who in political retirement has been its chairman.

There, Jokowi witnessed signing of an agreement for Proton to set up a joint-venture partnership in Indonesia to work towards production of an “Indonesian car”. It might start, Mahathir suggested, by importing fully made-up cars from Malaysia. Many immediately recalled the “national car” project of Tommy Suharto, the late former president’s youngest son, which turned out to be a South Korean car, fully imported.

The Indonesian partner in the Proton deal is a company called Adiperkasa Citra Lestari, which is not known to Jakarta’s Ministry of Industry and has no known record of business. Its unique selling point, however, seems to be that its chairman is Abdullah Mahmud Hendropriyono, who was there at the signing.

Hendropriyono as transmigration minister in 1999 helped organise the forced march of tens of thousands of East Timorese into Indonesia in a “protest” against the territory’s referendum vote for independence. In 2004 he was Megawati’s chief of the National Intelligence Agency when its operatives carried out the assassination of human rights activist Munir Said Thalib. Last year he resurfaced as a campaign advisor to Megawati and member of the panel forming Jokowi’s cabinet.

The crisis over the new police chief came to a head in mid-February. The candidate, Budi Gunawan, went to court against the KPK and got a judge to rule that the anti-corruption body had erred in naming him a suspect. PDI-P and other politicians insisted that his appointment went ahead. Two days later Jokowi then took the decision he should have taken a month earlier; he abandoned Budi’s nomination and put up another, far less controversial, police general for the top job. He also appointed two well-regarded figures to stand in for Samad and Bambang at the KPK, which is appealing the ruling about Budi to a higher court.

It’s against this background that in January his Attorney-General started lining up drug convicts for the firing squad, and Jokowi announced an Indonesian drug emergency that experts say is based on wildly exaggerated statistics.

It was suspiciously like a gruesome and large-scale law-and-order diversion from current political embarrassment. If Jokowi is really serious about drugs, he could drive down Jalan Hayam Waruk in Jakarta to nightclubs like ‘Illigal’ that are regarded as centres of the amphetamine trade and are said to have senior police and army protection. Many of the periodic fights between police and soldiers are thought to be over control of contraband activity, including drug supply.

It may be that Jokowi was playing a deeper game of giving Megawati and the PDI-P enough rope to hang themselves in the eyes of the public, to use an unfortunate metaphor. Certainly he would be very unwise to let the KPK be crippled, as this institution probably has more lasting popularity than his own.

Ruptures in two of the main parties in Prabowo’s Red and White coalition, Golkar and the Muslim-oriented PPP, have also given hope of a shift to the president’s camp in the DPR.

One problem is that very few outsiders have had a chance to draw Jokowi into deep conservation about his views and knowledge. He has floated into the Indonesian leadership almost like the gardener Chance in the movie Being There. He has seemed open to new ideas, including removing controls on access to Papua, but has not shown himself a man of wide education and tastes. But his stubbornness on capital punishment for drug felons seems to be resonating with the Indonesian public, if not all the educated strata. That is sometimes the risk of non-elite politics.

During the election last year, which coincided with the Muslim fasting month, I went along to a fast-breaking dinner held by Yenny Wahid, a daughter of the late Gus Dur, who leads a splinter of his old National Awakening Party.

She mentioned the notion of Jokowi as Petruk Dadi Ratu, a side narrative to the Mahabharata epic in the Javanese theatre. Those who’ve been to the wayang kulit or ketroprak will recall when the director or puppet master throws the switch to vaudeville, and serious drama is interrupted by four waddling peasant figures, Semar and three younger sidekicks, Bagong, Petruk and Gareng. These “divine clowns” bumble their way to solve dilemmas that seem beyond the gorgeously-dressed nobility, priests and princesses in the main storyline.

Petruk is the tall skinny one, and in this particular story he picks up a talisman of power accidentally dropped by its aristocratic owner, and becomes king, with comic and chaotic results.

It is too early to write Jokowi off as an innocent who will be brought down and compromised by the cynical political forces around him. But it’s a worry, and even faster than the loss of Barack Obama’s aura, Jokowi is testing the wave of optimism and idealism that brought him to the presidency.

Hamish McDonald is Journalist-in-Residence at the Australian National University’s College of Asia & the Pacific. This is an updated version of a talk he gave to the Australian Institute of International Affairs, ACT Branch on 17 February.