The view from the stage at PDI-P’s Sunday rally in Malang, East Java. (This and all photos below: from the author).

At the back of Malang’s tiny airport terminal, surrounded by fields of sugarcane in a beautiful valley just outside town, grands fromages from the local PDI-Perjuangan branch assembled with excited journalists as a chartered turboprop pulled into the apron after its short flight from Banjarmasin, South Kalimantan. The plane was carrying Joko Widodo, the recently-anointed presidential candidate whom local PDI-P figures are counting on to significantly boost the party’s vote in the region (as indeed are PDI-P branches all over Indonesia).

By now it’s cliched to observe that wherever Jokowi goes, he’s greeted like a celebrity. What’s important to note about this man is that he knows this, that he likes it, and that he goes out of his way to make sure that he’s seen being greeted like a celebrity. Take his car, for instance: the candidate had specifically asked to be driven in a Kijang, the cheap Toyota van beloved of Indonesian middle class families, and that the vehicle in question await him on the far end of the airport car park, thus ensuring that he would be photographed by the media while being photographed by groups of near-hysterical members of the public. The perp walk: Jokowi makes sure he’s the centre of attention at Malang Airport.

More than once on the drive into the city, the motorcade suddenly ground to a halt (forcing all other traffic to do the same). At the rear of the motorcade, there were a few panic-stricken faces when it was thought, at first, that there had been an accident at the candidate’s end. The reason for the snarl-ups became clear, though: Jokowi had gotten out of his Kijang to press the flesh with bystanders who came out of their houses to see what all the police sirens were about. 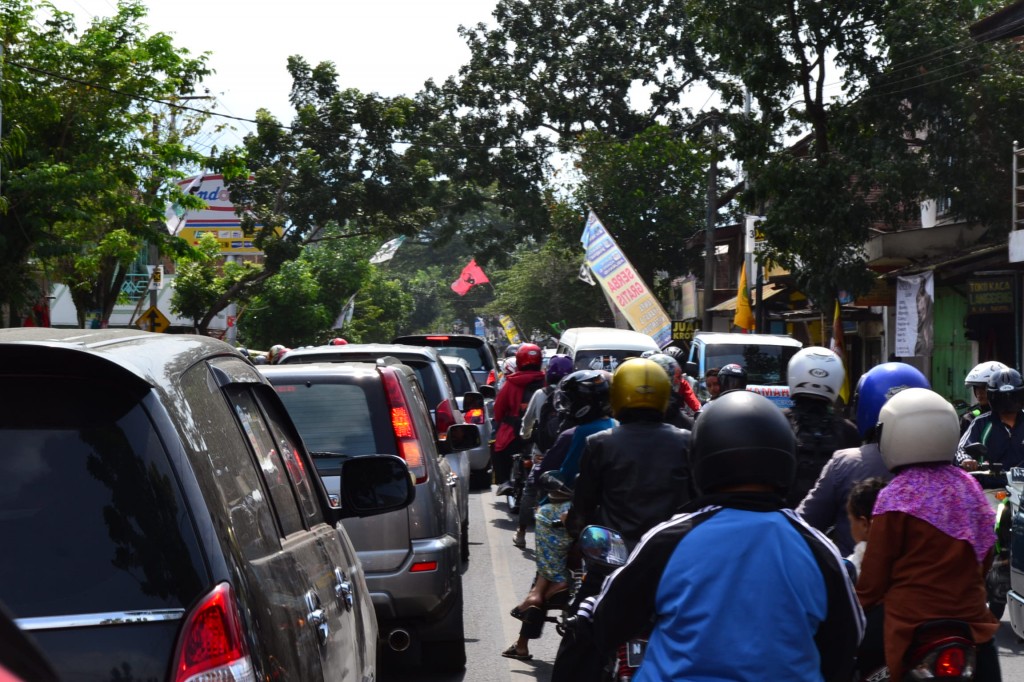 ‘Has there been an accident?’ The motorcade grinds to a halt as Jokowi greets the punters. These ladies seemed chuffed to have just met Jokowi.

By now the visit to Malang was displaying its adherence to the standard Jokowi campaign trip template, with a visit to a cheap restaurant for lunch. Naturally, this turned into a media circus, just as it was meant to. The candidate enjoyed some tongseng and sate with a succession of local PDI-P politicians keen to have their picture taken with him. Apart from the throngs of media, civilians from neighbouring restaurants crowded into the small restaurant to wave, shout ‘long live Jokowi!‘ or try their luck at taking a selfie. After stopping for a quick prayer and photo op at a nearby mosque, it was time for the ostensible reason for Jokowi’s visit to Malang: the sole scheduled kampanye terbuka (open-air rally) for the local PDI-P branch’s legislative campaign. Around 2,000 simpatisan (supporters) of the party had gathered on a field at the edges of town for the big event. By law it needed to finish by 4:00p.m., and thanks to the candidate’s tardiness it ended up being mercifully brief. If you’ve seen one of these kampanye terbuka, you’ve seen them all–but it is nevertheless always interesting to see Jokowi perform in this context, a big contrast to the settings (food stalls, neighbourhood streets) which he is most comfortable in. 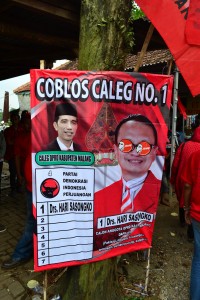 There are few PDI-P parliamentary candidates who aren’t puttingJokowi on their election posters.

After the national anthem (free advice for PDI-P: don’t mike your politicians while any singing is going on) and some overbearing oratory from senior party figures, it was Jokowi’s turn to talk. Though he is clearly more articulate and confident speaking in front of a crowd (or on TV, for that matter) than when he first arrived on the national stage during his 2012 gubernatorial campaign in Jakarta, Jokowi’s speech was abysmal in terms of content, containing nothing of substance. And when I say nothing of substance, I mean nothing of any substance whatsoever: his speech was the political equivalent of a pep talk given by the coach of an under-13’s soccer team before a big game.

He mentioned that he ‘hadn’t slept in three days’, saying that PDI-P supporters shouldn’t either. ‘Let there be nobody here who sleeps at 6 o’clock, or even 8 o’clock!’ in the lead up to the election, he said somewhat bizarrely. Telling the crowd to consider how great it would be if PDI-P won enough of the parliamentary vote to not have to enter into a coalition, he made a self-deprecating joke about his skinny frame and wrapped up. The only mitigating factor in all this was that Jokowi–unlike most Indonesian politicians who, completely missing the point of a microphone, decide that the best way to deliver such vacuous and patronising rhetoric is to shout it as loudly as you can–spoke at a reasonable volume. He’s never been known for being able to speak convincingly about policy issues in detail, but this was remarkably and inexplicably devoid of even the most vague discussion of policies or ideology. Indeed, when taken out of the blusukan and casual media conferences at where his appeal is showcased and onto the stage at a party rally, Jokowi begins to look and talk like every other Indonesian politician–interestingly, given how much of his political success is due to his carefully-cultivated image (based, to a large degree, on truth) that he is very much different from the hacks the electorate is used to. Jokowi is known to regard this style of campaigning as a bit of a drag, and would rather stick to what he is good at. I doubt that any of this does him grievous political harm, but it is in some ways symbolic of what happens when the outsider becomes the figurehead of an uber-establishment party, trading his checked shirt for PDI-P colours.

A sign of more trouble to come was, literally, right before everyone’s eyes on Sunday: the presence of the Megawati Soekarnoputri-era national police chief Da’i Bachtiar, of whose anti-corruption credentials many would be skeptical, to say the least. This comes after speculation about PDI-P matriarch Megawati’s preference for a military or police figure to become Jokowi’s running mate: the individuals mentioned in this Jakarta Post story are decidedly shonky, even by Indonesian standards. Jokowi and his allies would be crazy not to resist, at all costs, efforts by Megawati to force such a political time bomb on him after the legislative campaign ends.

But the fleas, as it were, come with the dog. Jokowi obviously feels that he must pay his dues, having been handed the nomination without a public conflict with the party brass, and this is why the campaign trip template now includes events at which he blends into the crowd of PDI-P hacks around him. Local party officials are certainly excited that he is on board, saying that his candidacy has improved morale and that it’ll definitely win votes. Jokowi’s efforts at campaigning for the party are appreciated by the grassroots, and it is certainly in his interests in the short run that the goodwill is maintained. 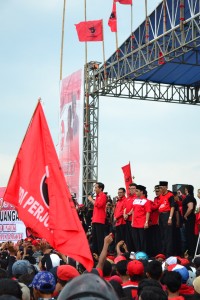 Later on Sunday night, in the hill town of Batu, a Jokowi-branded live comedy show had attracted a young crowd to a city park. The event was supposed to close off Jokowi’s visit to the area, but he was characteristically late. The performers ran out of material and the crowd began to ebb away, but just before midnight everything burst to life as the candidate showed up for a quick photo op, walking around the park with the young volunteers who organised the event and having a cup of coffee at a nearby drinks stall. It was classic Jokowi, made all the more reminiscent of the grassroots energy which characterised his famous gubernatorial race by the presence of enthusiastic, mostly young, volunteers from outside the party. It was this ability to inspire people–many of whom would otherwise have not gotten involved in politics–to give up their time for him that helped Jokowi defeat a formidable political machine in Jakarta in 2012.

Inevitably, Jokowi the plucky outsider and Jokowi the party man are two personas which sit uneasily with each other. Despite its pretensions of being the party of the common man, and the vaguely populist worldview which many of its functionaries share, PDI-P is more than capable of being as corrupt and reactionary as any other section of the Indonesian political establishment. Yet Jokowi has overwhelmed his rivals in the past with the sheer force of the popularity he’s cultivated through his own populist political strategy, and there’s no reason to dismiss its potential effectiveness in the future. It will be fascinating to see, after the votes are counted on 9 April, if Jokowi chooses once again to embrace his outsider schtick–exchanging the PDI-P jersey for his old checked shirt.

Liam Gammon is a PhD candidate at the Department of Political and Social Change at the Australian National University. He wrote an honours thesis on Joko Widodo’s 2012 gubernatorial campaign and is currently researching populism in contemporary Indonesia.