The Killing Season: A History of the Indonesian Massacres, 1965-1966

I first assigned Joshua Oppenheimer’s film “The Act of Killing” for my course in Comparative Genocide at Newman.  The movie is a documentary about the mass violence in Indonesia beginning in 1965.  My students and I found it chilling:  emotionally moving, troubling, and enormously sad.  Naturally, they had many questions. I wasn’t able to answer many of them.  It turned out, the killings in Indonesia had received far less attention than other cases of mass violence.

In the brief few years since then, this has started to change.  So I’m going to devote three interviews to this topic. Later this summer, I’ll talk with Katharine McGregor and Annie Pohlman about their edited volume The Indonesian Genocide of 1965-66 and Jess Melvin about her book The Army and the Indonesian Genocide. 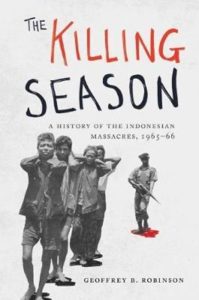 We’ll start, however, with Geoffrey Robinson and his book The Killing Season: A History of the Indonesian Massacres, 1965-1966 (Princeton University Press, 2018). The book is a carefully argued, thoroughly researched attempt to understand what happened following the kidnapping and killing of several army generals on 1 October 1965. The book is narrative, but it’s also intensely analytical. Robinson is most interested in understanding what happened and why, questions disputed since the very hours the violence began.  He’s also interested in the long-term implications of the violence for Indonesian political culture, for the experience of victims and perpetrators and for attempts to come to grips with the past.  It’s an extraordinary analysis.