Recently I have been curious about regional influence over Laos, particularly with regards to Laos’ long term viability as a state. The graphs here show IMF data just as a rather crude example of surrounding “economic quadrangle” countries’ involvement in Laos. Landlocked (or land-linked), serious finance in the Lao economy (2009 GDP USD 14.13bn) is mostly dependent on external sources. Laos has been long dependent on Thailand. The recent steep rise of Thailand’s involvement is presumably attributable to the hydropower industry developing in Laos. But, from the chart, what happened in 2002 in particular? Overall Chinese involvement is rising, and predominantly dominated by hydropower interest and educational exchange programmes. Vietnamese involvement (after a brief drop post helping through the financial crisis of 1998) appears to be deepening as well. What happened to Laos and Vietnam’s “special relationship”?

The IMF identifies that “[s]tructural weakness in the economy and little progress in expanding the growth base and diversifying economic activities” as a major constraint for Laos. This March, as is well publicised, the Mekong’s water levels have run low with blame attributed towards China by NGOs and populist statements from local governments. The “Battery of Asia” label the Laos politburo applies to itself appears to be shortsighted in this respect. What happens when the river runs dry in future and the dams’ reservoirs are unable to be quickly replenished? What happens when silt buildup renders the dams ineffective in decades to come? An often-used cliché is to throw all your eggs in one basket. Will Hydropower be Laos’ only significant basket? What about Laos’ other eggs like the mining industries? Or tourism? How sustainable is the mining industry? Does Laos receive an ethically appropriate dividend from mining companies? Tourism, especially with ‘ecologically conscious’ folk (aka, ’cheap’), surely cannot be talked of as a serious avenue of economic stimulus. Foreign donors have contributed to Laos with varying degrees of significance, none of it particularly noteworthy compared to recent U.S involvement in Paraguay (see below.) External economic involvement is dependent on regional issues and is not necessarily reliable. Referring to the graph above, why has Australian and Singaporean involvement in Laos dropped off from 2006? Why has U.S., Korean and Japanese involvement grown? Clearly through the Asian Financial Crisis of 97-98, foreign donors and the stalling economic quadrangle left Laos high and dry. The impacts of the crisis upon Laos were deleterious with the kip suffering an 87 per cent plummet. It evidently took a further five years post-crisis before Laos became appealing again for the donors mentioned. What can Laos do when investment in its economy appears peripheral to outside states?

Geopolitically, the Lao People’s Revolutionary Party must find itself a perennial victim. But since the breakup of Lan Xang in 1707, when hasn’t governance in Lao space been hindered with a ‘victim mentality’? This must filter into Lao consciousness. Does ‘socialism’ in Laos perpetuate this presumed national disposition, and are aid patch-up jobs, therefore, futile? Or as one commentator inferred to me, have people in Laos never had it is as good as they do now?

On the other side of the Pacific, Paraguay in many respects is a similar country geopolitically to Laos. Paraguay has a landlocked, (or… land-linked) population of approximately 6.34 million (Laos has a population of 6.32 million) and a GDP more than twice that of Laos at USD 28.5bn in 2009. Paraguay is perennially dependent on two powerful neighbours in Argentina and Brazil (Laos has Thailand and China) and a third neighbour, Bolivia, which is of socialist orientation (like Vietnam.) Paraguay’s economic involvement from Argentina and Brazil dipped during the Argentinean Financial crisis from 1999-2000 adversely effecting its population. Economic recovery from the crisis was more rapid than Laos’ recovery from the Asian Financial Crisis. Similarly to Laos, Paraguay has a huge hydropower export industry centered upon the Itaipu dam, which happens to be the second most powerful dam in the world. The Itaipu makes Paraguay the world’s second most prolific energy exporter after France (incidentally, as you will recall, a creator of artificial borders in Indochina and elsewhere). However, unlike Laos, Paraguay has other streams of income in manufacturing and service industries. Furthermore, unlike Laos, Paraguay is not endowed with a notable mining sector. 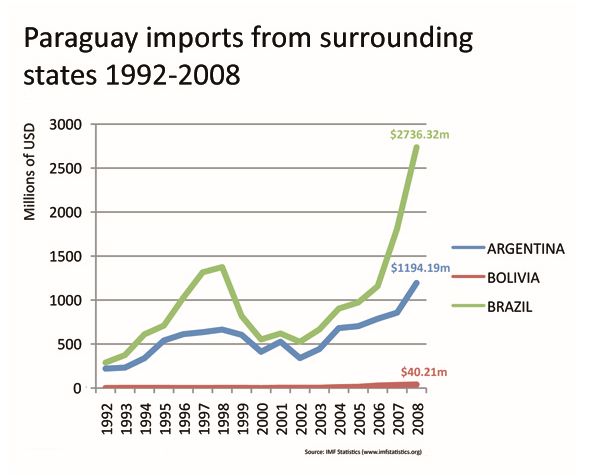 Why has Paraguay achieved such economic involvement from more developed states? Like Laos, Paraguay has suffered long periods of political suppression. However, presently Paraguay has an open, representative, democratic system of governance that’s amenable to other democratic states nearby. But similarly for Laos, Thailand, China and Vietnam do not have open systems of governance, yet their economies are rapidly growing and improving quality of life for their citizens.

So what of the future for Laos? Is there as much external pressure on Laos to develop as in Paraguay? Would Laos ever look to Paraguay as a development model? How will the Sayasone government spend the revenue garnered from hydropower? Considering the population of Laos is expected to double in the next twenty years, does the state of Laos have to be maintained? Should we on the outside place our faith in regional integration absolving the importance of borders so that livelihoods in Laos are not subject to an apparent stagnant fate? How do people in Laos regard their sovereignty? Can the Greater Mekong Sub-region (GMS) come to represent a ‘Zomia’ like spatial representation for mainland Southeast Asia? Would this type of representation give Laos a better chance of ‘catching up’? Most importantly, what do Laotians want?