On the latest Rohingya crisis

International media were overwhelmed at the end of August 2017 by reports of widespread attacks by Myanmar’s military forces against elements of the Rohingya population. This occurred once again in northern Rakhine state, near Myanmar’s border with Bangladesh.

Such fighting has occurred in the past, sometimes resulting in mass illegal movements of Rohingya into Bangladesh border areas, but this may have been the first time such violence was witnessed first hand by international media.

Even her latest statement of 6 September still makes no mention of what her government proposes to do specifically in order to remedy the situation of the Rohingya. Her 7 September statement to the BBC about doing the best to maintain stability and to protect all people in the area is not especially reassuring.

Suu Kyi may have her own reasons for continuing cooperation with the Myanmar Army in their current power-sharing arrangement, but why wouldn’t she display some political leadership on behalf of the Rohingya? After all, even if an intervention by her was unsuccessful, she would be given credit for her courage and for her principles.

Behind the latest crisis, there is a significant new factor in the Rakhine political landscape. This is in the form of the Arakan Rohingya Salvation Army (ARSA), described by Suu Kyi and others as a terrorist group, and showing many of the attributes of Islamist terrorist groups elsewhere.

ARSA has declared links with Islamic State, uses crude anti-authoritarian propaganda, and shows a willingness to introduce arms into what was previously an ‘unarmed political struggle’. The utterly opportunistic nature of their public profile, and blatant use of ordinary Rohingya to cover for their own extremism are similarly shared attributes.

Remarkably, this latest flight of the Rohingya coincided with the 24 August release of the first report by the Kofi Annan Commission on Rakhine State. It was appointed a year earlier by the head of the Myanmar government, State Counsellor, Daw Aung San Suu Kyi. Indeed, the Myanmar government has not even had time to respond to the report.

Visiting Myanmar at the time, Annan took the opportunity to reinforce his call for the Myanmar government to accept the essentially practical, but generally short-term, recommendations of his report. Not surprisingly, the report is silent on the question of how a political compromise, or consensus, on the Rohingya inside Myanmar might be struck.

It is hard to believe that the timing of these incidents was absolutely unrelated to the publication of the Annan Commission report.

Many leaders in Myanmar—including perhaps Aung San Suu Kyi herself—are becoming rather exasperated with the high-minded obsession that they see international agencies displaying towards the Rohingya. The Myanmar government as well as the Myanmar Army have openly objected to the one-sided statements about the condition of the Rohingya made by some United Nations representatives, apparently influenced by the more vigorous campaigns by rights groups in recent years.

These campaigns may have considerable justification, as the Rohingya have long been dreadfully treated by the majority Burmans. But the insensitivity of the campaigns has certainly provoked Buddhist extremists, as well as disconcerting others.

Some in Myanmar have also been upset when atrocities documented against Rohingya in neighbouring countries seem to be glossed over.

It is well known in Myanmar that popular attitudes towards Rohingya in Bangladesh are also not positive.

However, these reactions cannot excuse the wilful discrimination that has been practised against Rohingya in Myanmar without reason, for many decades or generations. Nor do they justify Myanmar not according basic civil rights to Rohingya, such as the right to citizenship or the right to seek permanent residence.

The Myanmar National Security Adviser’s undertaking that any Rohingya holding Myanmar citizenship who fled to Bangladesh for their safety could return to Myanmar was intended to be a deterrent rather than being generous.

Moderate and reasonable as the Annan Commission recommendations are, it might be too much to expect the Myanmar Government to do much about them, given its manifest lack of interest in finding any true resolution for the Rohingya.

In these circumstances, Suu Kyi’s reluctance to offer a better deal for the Rohingya is something of a mystery. The likely result of leaving the Myanmar Army to deal with an extremist armed group in its own way, while in accordance with Myanmar’s constitution, is the creation of yet another insurgency. Driven by largely unfounded fears about national ‘cohesion’ without hope of any negotiated outcome.

It does nothing to break the army’s long lasting but unproductive and cruel dominance in Rakhine State.

International leaders visiting Myanmar immediately after the latest incidents only reinforced impressions of the international community’s inability to have any impact on the situation, at least under current conditions.

Visiting Indonesian Foreign Minister, Retno Marsudi, could offer no real assistance. Although ASEAN could in theory act as a mediator.

Trevor Wilson is a Visiting Fellow on Myanmar at the Department of Political and Social Change in the ANU’s Coral Bell School of Asia Pacific Affairs. He is currently a member of the advisory panel for the ANU Myanmar Research Centre. His 36-year career in the Australian foreign service included serving as Australia’s Ambassador to Myanmar (2000–2003). 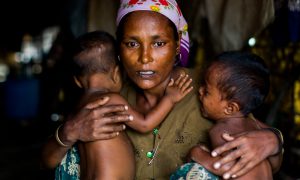 The Rohingyas: Inside Myanmar’s Hidden Genocide