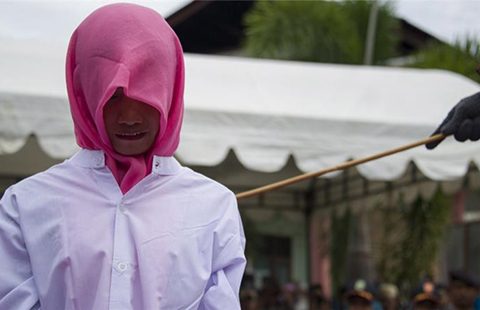 ‘Lesbianism’ and detention in Aceh Arrest of two girls for hugging a worrying sign of increasing religiosity and conservatism.

In the same month that 12 UN agencies called on all states to end violence and discrimination against LGBTI people, two young women have been arrested in Aceh, northwest Indonesia, on suspicion of being lesbians.

Their crime? Sitting together and hugging in public, and supposedly possessing incriminating photos of their relationship on their mobile phones.

Aceh’s sharia-based criminal code forbids same-sex relationships and sexual activity, and instructs a punishment of 100 lashes and 100 months in jail. So far, the two women – aged 18 and 19 – appear to have escaped fairly lightly. According to the police, they will undergo a ‘rehabilitation’ program run by the local Social Ministry office, although what that might involve is anyone’s guess.

What happened during their four days of interrogation is also unclear. In previous arrests of heterosexual couples, the sharia police (Wilayatul Hisbah) have been known to carry out ‘virginity tests’ on women; it is possible that similar tests were conducted on the two women in question, but I suspect this did not occur in this case, mostly for the fact that neither the police nor the sharia police are likely to know how lesbians actually have sex.

Aceh is the only province in Indonesia that has the national government’s permission to create sharia by-laws. This is because Aceh has had ‘Special Status’ since 1999, introduced as part of a peace deal with Gerakan Aceh Merdeka (GAM or the Free Aceh Movement).

Controversially, the by-laws apply to all residents and visitors to the province, regardless of their religion. In addition to same-sex relations, other activities that are forbidden under Aceh’s criminal code and by-laws include zina (all sexual relations outside marriage), khalwat (‘seclusion’ or indecency), gambling, and avoiding Friday prayers.

Human Rights Watch LGBT rights program director, Graeme Reid, has said that “The arrest of two women in Aceh for everyday behaviour is an outrageous abuse of police power that should be considered a threat to all Indonesians. The Indonesian government needs to press Aceh to repeal its discriminatory new by-laws.”

The fact that the women were accused of lesbianism for simply hugging in public is extremely worrying. Will all teenage girls – for that’s what these two women really are – now face counselling and re-education for hugging their friends?

Why is hugging deemed to be a sexual activity rather than a friendly behaviour? I’d hate to ask an Acehnese police officer what they think about teenage female friendships in Australia – full of hugging, playing with each other’s hair, and lying about on school ovals all over each other.

Straight, lesbian, bisexual, or somewhere in-between, everyone should be allowed to hug their friends. And their partners, for that matter.

Arresting two women for hugging shows just how anxious the Acehnese powers-that-be are about controlling their residents’ sexuality.

It is one more worrying sign of increasing religiosity and conservatism in Aceh.