Brother No. 2 of the Khmer Rouge becomes a lesson learned at the ECCC?

Nuon Chea, known as Brother No. 2, died at age 93, on Monday 4 August 2019. He was the former Chairman of the Democratic Kampuchea National Assembly and Deputy Secretary of the Communist Party of Kampuchea. After Democratic Kampuchea (DK) collapsed in 1979, he remained a leading Khmer Rouge figure while the movement operated as a rebel guerrilla force in the country’s west. He was allowed to remain free and lived near the Thai border from 1998, when he defected, until he was arrested by the Extraordinary Chambers in the Courts of Cambodia (ECCC) in 2007. 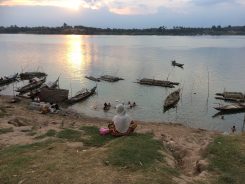 Genocide recognition in the wake of Nuon Chea’s death

The passing of Nuon Chea raises questions regarding the legacy of the Khmer Rouge tribunal and in particular about the recognition of genocide.

The ECCC had separated the charges in Case 002’s Closing Order in to a series of smaller trial segments out of concern for the accused person’s health condition and the danger that no verdict would be reached if the defendant died. As such, the Trial Chamber limited the scope of inquiry in Case 002/01 to focus on alleged crimes against humanity related to the forced movement of the population from Phnom Penh in April 1975 and later from other regions, the execution of Khmer Republic soldiers at Toul Po Chrey execution site in Pursat immediately after the Khmer Rouge takeover in 1975. In this case, the Trial Chamber announced the judgment and Nuon Chea and Khieu Samphan were found guilty of crimes against humanity and were both sentenced to life imprisonment. The judges found that two million people were forcibly transferred in April 1975, and 300-400,000 people were forcibly transferred from September 1975 to early 1977 and at least 250 Lon Nol soldiers were executed. In Case 002/02, against the same accused person as in the first trial, there were six discrete trial segments: worksites and cooperatives; security centers and internal purges; treatment of targeted groups; regulation of marriage; the nature of armed conflict and the role of accused. There were 274 days of hearings in this case during which 186 individuals testified. The Trial Chamber announced the full judgment in Case 002/02 on 26 March 2019 following the summary of the judgement on 16 November 2018, but Nuon Chea’s Defense announced it planned to appeal. As of Nuon Chea’s death, Case 002/2 is still going on in the Appeal Chamber of the ECCC and no verdict has been reached yet.

During the first trial, Case 002/01 hearing of evidence in February 2012, Nuon Chea responded to various documents from the Co-Prosecutors, in contrast to two other accused persons Ieng Sary and Khieu Samphan who invoked their right to remain silent. He related his life experience to a document about the first party congress in 1960 and the tactical party line until 1967.

“In summary, my entire life, from childhood to now, I did not ever live through a period of peace. I witnessed all those incidents, awful incidents.”

It seemed Nuon Chea was willing to provide further information about what happened during the Khmer Rouge regime. However, this expectation to hear more of the history behind the killing fields happened only at the beginning of the trial. While Nuon Chea attended the meeting in Phnom Penh in 1960 and was former chairman in DK, he clarified that his role was on education only and thus he denied knowing about the structure of the regime. For example, on the topic of evacuating cities, he conducted the meetings in Phnom Penh before and after the Khmer Rouge took power and he met top leaders, therefore, he was asked why he didn’t know anything about the plans. The question arsis, was this policy in his education system to teach members of the communist party during that time?

“Your Honors, the education focused on the elimination of privatization, individualist, corruption, building the stands, loving the party, the country, education people to be determined, abandoning personal interest, focusing on the benefit of collective interest. These are were part of the party’s principle being educated to people, and I was tasked with educating people to abolish the individualism.”  Nuon Chea said.

At the ECCC there was a limited scope of investigation in Case 002/01. It was mainly focused on the structure of the party, the role of the accused, politics of DK and crimes against humanity committed in the course of the evacuation. Although Case 002/02 had a much larger scope, regretfully the accused person (Nuon Chea) was not as active as in the beginning of Case 002/01. In fact, he intended to remain silent after the first case because he lost confidence in the ECCC process and believed the ECCC failed to conduct a fair trial. The first trial at the ECCC took a long time to begin even after Nuon Chea was arrested; he was 81 years old when he was detained. It took five years for the first trial and a further four years for the second trial and its summary of the judgement, then another six months for the final judgment. It took more than ten years for two cases, but still, the ECCC could not finish. Nuon Chea aged alongside poor health and a long court procedure, died and brought everything to the grave.

From the victim’s perspective, who originally participated at the ECCC, they are concerned by their own age and that of the accused people. The Trial Chamber process takes a long time, they fear they are too old to get justice, and some survivors died already whilst they kept looking to see justice for their family, relatives, and other victims. Survivors talk about the length of the trial as a big obstacle to achieving justice. It relates to the mandate of the ECCC: if they cannot finish their mission and all the cases before them, is it a failed mission in Cambodia? The next wave of survivors who are participating at the ECCC or in Non-Government Organization projects are civil parties in Case 003 and Case 004, against four additional suspects. When can they receive justice if, 40 years after the fall of the Khmer Rouge regime, they haven’t had the opportunity to know the truth of mass killing during that time.

“The trial procedure is slow. Too Slow. The victims are too old. During the regime, I was a child. Now I have already become old. If the Court is still slow, I might…. die before receiving justice from the court.”

This case should be a lesson learned for the ECCC, the accused persons, survivors and the younger generation.

The ECCC should push their procedure faster than last time and give more opportunity to survivors to participate, especially for civil parties in Cases 003 and 004.

The remaining accused person should cooperate more with the ECCC to be a leader who has responsibility for their leadership rather than burying information and keeping silent forever.

The younger generation should pay more attention to history and critical thinking on how it happened and how to be a responsible leader to avoid the crimes and if they don’t want to be worse record leader in their country.

“History is a reflection for future leaders”