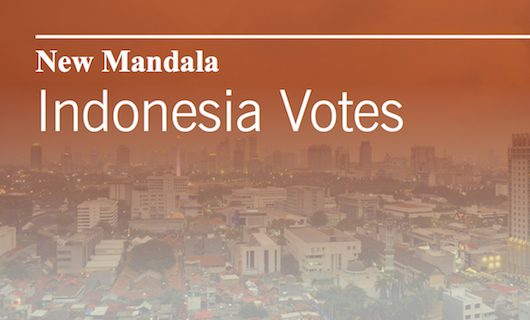 The campaign for the legislative elections in April is now officially underway, and provides a good starting point for our coverage at Indonesia Votes.

In typical New Mandala style, here’s a brief (and rather irreverent) run-down of what’s been happening so far, with a view to the Presidential elections in July. Of course, various forms of political campaigning in Indonesia have been going on for some time. We’ve seen subtle “paid” opinion polls, to not-so-subtle billboards congratulating potential candidates for ‘success’ in other roles.

TV stations have been plugging their owner’s political interests, now very much a feature of the Indonesian media landscape. Media mogul and businessman Aburizal Bakrie still clings to the leadership of Suharto’s old party, Golkar, which will be largely focusing on the rural vote.

Another media mogul and political candidate, Surya Paloh, said he wouldn’t run, presumably trying to engender sympathy so people would ask him to run, yet few seem to care either way.

The Hanura party recruited Hary Tanoesoedibjo, the ‘big fish’ of Indonesian television, as its Vice-President. His TV stations have also been pushing his party’s interests. A highlight of the ‘pre-campaign period’ so far has been the ‘quiz’ aired on two of Hary’s TV stations, where contestants answer questions about his party. The quiz shows have since been banned by the Indonesian Broadcasting Commission (KPI), after the TV companies refused to change the format after despite repeated requests to do so. Yep, it would seem anything is possible in this election. 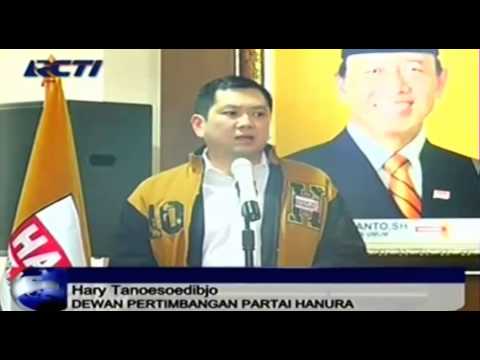 VP Candidate Hary Tanoesoedibjo getting some free publicity on the TV station he owns.

Current President Susilo’s Bambang Yudyohono’s party, Partai Demokrat, has declined considerably, and not even a US style democratic convention could save them. Their potential Presidential candidate Gita Wirjawan has been spending big on social media, claiming to ‘represent the young generation’. Yet polling suggests less than 5% of Indonesians want to be represented by him.

Prabowo’s Gerindra Party gets the prize for the most innovative campaign strategy so far. The big wigs of Gerindra media strategy have settled on a man dressed up in yellow tights as a giant Garuda action figure. They seem to resemble scary characters from the 1980s film The Dark Crystal, but points for effort.

It would seem there is only one possibility for President: the irresistible force of PDI-P’s Joko Widodo, or ‘Jokowi’. He has now finally been endorsed to be the PDI-Ps presidential nominee by party chairwoman Megawati Sukarnoputri, ending months of speculation. Jokowi has led all the legitimate polls for over a year. His polling percentage isn’t quite that of Kim Jong Un (who recently reported 100% of North Korean Vote with 100% voter turn-out…) but he’s way ahead of everyone else. As Jokowi’s popularity steadily rose throughout 2013 and early 2014 as Governor of Jakarta, both local and foreign journalists have been profiling this former furniture entrepreneur. Even I had a go at it. Jokowi’s new style of politics (described by ANU PhD student Liam Gammon in this post) has captured the imagination of millions of Indonesians. Jokowi’s campaign will unlikely to be very different from his previous campaigns as Mayor of Solo or Mayor of Jakarta, just amplified to a grander scale. His two minute speech on Friday was typical Jokowi. No nonsense, no grand posturing, no great fanfare. It’s not his style, and besides, that’s what everyone else is doing. He will continue his style of campaigning – travel to the poorer areas, talking directly with the people, ask what needs to be done.

Those political candidates who own media companies will be looking for any negative story to upset his campaign. They tried blaming the Jakarta floods in January on him, but for the most part this hasn’t worked. There’s no doubt they’ll try creating numerous other ‘scandals’ in the coming months. Despite his late nomination, he and his campaign team have been preparing on the sidelines for some time. They are ready, and claim to be not worried if certain TV stations don’t cover him fairly.

The big question now is who will run as his Vice President? Polls suggest he’s so popular that whoever he ran with, he would win. But he’ll still have to choose wisely. A Vice-President who represents the old guard would not be indicative of his new brand of politics, which is a proven track record of reform, and policies which originate from ‘the ground up’.

The likely focus of the election campaign in the mainstream media, local and foreign, will be the Jokowi vs Prabowo battle. But there are many other issues shaping up to define the 2014 campaign. We’ll be covering all of them at New Mandala during this election.

To name just a few:

How much vote buying, and other forms of ‘devious’ campaigning, is going on? And let’s not forget a question that comes around every election: which candidate is the best karaoke singer? These questions, and many more you can contribute for us, will be part of New Mandala’s coverage. Send us a post if you have an interesting topic, and join in on the comments below the articles. We’ll be trying to feature reader comments at the end of each week – so get involved with us throughout what will be a great campaign.

Dr Ross Tapsell is a lecturer at the School of Culture, History and Language at the ANU. He researches the media in Indonesia and Malaysia.