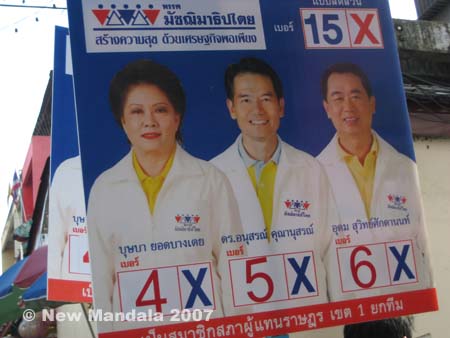 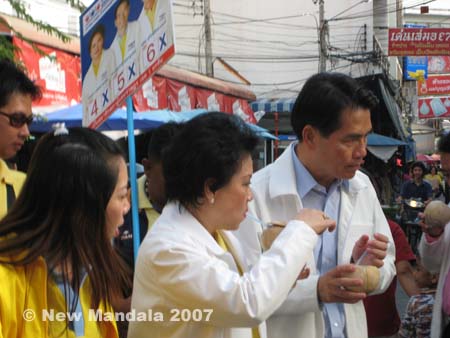 A regular New Mandala reader with camera at the ready captured these images of local campaigning in Chiang Mai’s Wororot market. Featured are Boosaba Yodbangtey and Dr. Anusorn Khunanusorn. I have crossed paths with Boosaba a few times in the past, as she has been active in building up political connections in the district where I have been undertaking fieldwork. Here is an image of a kathin festival donation she made in late 2005. Boosaba was a successful candidate for the senate in 2006 but given the political crisis and subsequent coup her victory was short-lived. She is now running on the Matchima Thippatai ticket under the predictable “create happiness with sufficiency economy” banner. Her CV makes for interesting reading – she has a strong background in local government in Chiang Mai and in weight-lifting! (Her husband, also an active local politician and Thaksin foe is a big shot in the national weight-lifting scene).

Bangkok Pundit has some interesting comments on Matchima‘s policies. What I find most exciting is the promise to build 9 million ponds for farming families throughout Thailand! I have some experience in this area having helped to dig the pond pictured below (I took the photo during one of my very short rest breaks). I am happy to offer my services should Matchima find itself in a coalition government.